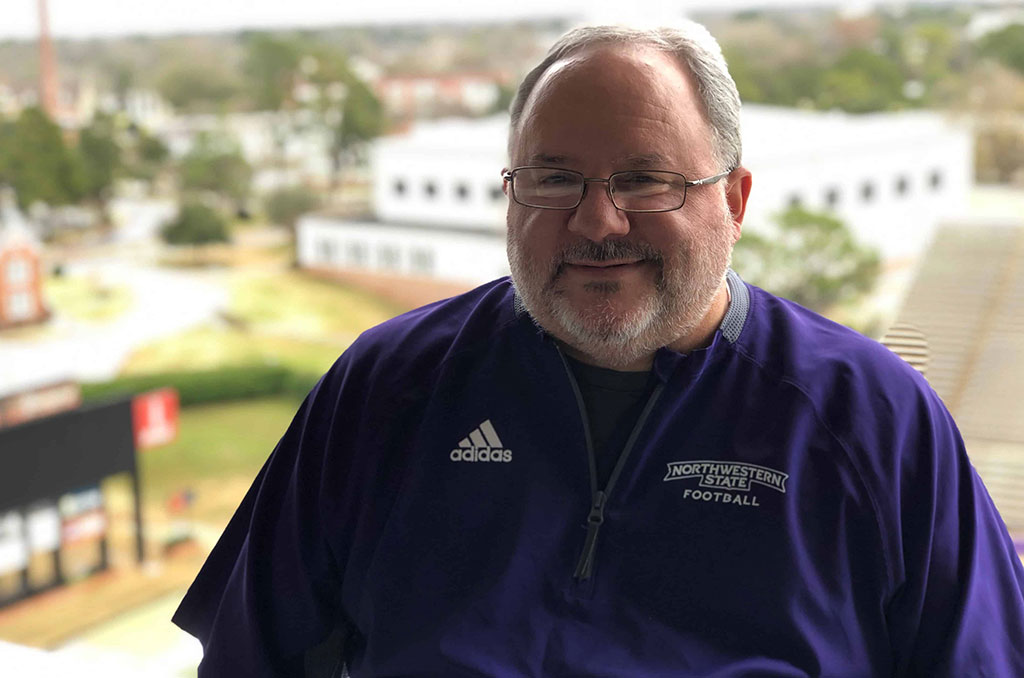 **In conjunction with the annual Louisiana Sports Hall of Fame ceremony, GeauxPreps.com is honored to feature the profile of this year’s inductees over the next two weeks. Congrats to all honorees and thank you for your contribution to athletics in Louisiana!

He has another fire to put out. Or, make that a couple of fires.

There are display cases to change out and there’s the matter that there aren’t quite enough things to display for bodybuilding legend Ronnie Coleman; yet, Coleman has plenty more items at his home near Dallas, if only someone can pick them up by that night because the next day is the deadline.

“If you can keep your head when all about you are losing theirs,” goes a line from Rudyard Kipling’s “If.” This could be the Quote of the Day seven days of most weeks for Douglas Vane Ireland, the longtime chairman of the Hall of Fame.

“ ’Wall of Flame’ is my pet expression for it,” says the 61-year-old Ireland, LSHOF chairman since April 1990. With his burning passion for the Hall, his grace under pressure and his extraordinary ability to multitask and remember names, dates and details of Louisiana sports legends, past, present and future, he is a perfect fit for the job.

The widespread respect he has achieved for that unpaid role as well as for his 30 years as an innovative sports information director at Northwestern State University are why he is among 11 honorees in the Class of 2021 to be inducted into the Hall of Fame on August 28 at the Natchitoches Events Center. (The 2020 Class had to wait until this June because of the COVID-19 pandemic.)

For information on the Aug. 26-28 2021 Induction Celebration and participation opportunities, visit LaSportsHall.com or call 318-238-4255.

Ireland’s ticket to this exclusive club is as a winner of the Distinguished Service Award for Sports Journalism.

“He’s learned everything I taught him,” quipped Jerry Pierce, who hired Ireland to be the SID at NSU in January 1989.

When promoted to vice president at NSU 15 months later, Pierce handed Ireland the reins to the Hall of Fame that he had expertly worked since 1972, when he helped the Hall develop its first exhibit case at NSU’s Prather Coliseum.

“Doug took it to another level,” said Pierce, “about as high as it can get. He’s one of the most talented people I have ever been around. When he took over, it took off, and he’s fought the battles to keep it going.”

Born in Indianapolis, Ireland is the son of a retail store manager who was a stateside Army Air Force veteran of World War II and the Korean War.

A Temple University graduate, Walter “Bud” Ireland worked at various G.C. Murphy department stores in Pennsylvania, Ohio, and Virginia before he moved the family to Jonesboro, in rural north Louisiana, in September 1967.

“Dad wanted his two boys raised in a small southern town,” says Ireland. “It was a great choice.”

Ireland’s mother, Genny, threw 2-year-old Doug batting practice in their yard at New Kensington, Pennsylvania (home movies document it), and typed his earliest stories for the Jackson Independent (age 14-15). Her father, George Kapp, died when Doug was 6, but has provided lifelong inspiration.

As a city councilman (1948-52) in Butler, Pa., his grandfather got the city to create Butler Memorial Park, which is, Doug says, a “beautiful, vibrant park 70 years later. He has impacted generations.”  Grandpa Kapp was born in a farmhouse in the small, lush valley where Memorial Park is set.

Ireland’s first two role models in sports journalism were in Jonesboro. One was Louisiana Sports Hall of Famer Dan McDonald, a former sports information director at NSU and the University of Louisiana at Lafayette, and the other was the late Raymond “Doc” Jeffress, who was the public relations director at the Hodge paper mill and sports columnist for over seven decades at the Jackson Independent.

As a Jonesboro-Hodge High School student-journalist, while working summer youth league baseball games, McDonald taught 11-year-old Ireland how to score a game and do public address announcing. Ireland followed McDonald’s tracks to Northwestern State, where, as a freshman, he volunteered in McDonald’s SID office and soon landed the sports editor’s job at the student newspaper.

“It didn’t take me long to figure out who I wanted in that job,” said McDonald.  “I knew that Doug was already good at it and would do nothing but get better at it.”

Ireland’s career included setbacks as well as triumphs – he was fired from jobs three times between ages 15-27, but he overcame those bumps in a grand way.

McDonald marvels at how his protégé handled the load of working both as the chairman of the Hall of Fame and as NSU’s SID.

Shouldering that load was made easier, Ireland said, by lessons learned from his setbacks.

“Each time, I had friends rally around me and lift me up,” said Ireland. “Each time I made sure to be accountable and to learn. Each time I bowed my neck and vowed to be better, be smarter and more perceptive.“

That paid dividends when he moved to NSU and soon found himself with an important, unpaid second role as Hall of Fame chairman. Other than his secretary, the late Rhenda Cedars, and student workers, he was flying solo.

Ireland shrugs off the idea it was “tough” to handle both jobs, then or for years to come.

“Tough? What an honor to have the responsibility,” he said. “There were challenges, there was less sleep and not quite as much fun as possible, but it was never a burden, always a thrill.”

One of the darker times for the LSHOF came with Hurricane Katrina and its aftermath in 2005. The museum project was slated to get $7.6 million in construction funding a month later from the state bond commission, but that meeting and those plans were dashed. Yet, Ireland never lost hope it would become a reality.

“When Katrina hit, I was among those ready to forget about hoping,” said Kent Lowe in a 2012 story in which the Town Talk of Alexandria honored Ireland as its Sportsman of the Year. He was referring to fears that exhibits and memorabilia that had been temporarily stored in the French Quarter might be ruined, not to mention the many other worries about the fate of people and cities across the state and financing. “But it’s because of Doug, who kept telling us we’re going to have a building someday, that kept the hope alive.”

Ireland admits to having been “on edge” watching television coverage during the week of the big storm, but as it turned out, none of the Hall’s materials were even slightly damaged. The anticipated funding for a building, however, suddenly seemed not feasible.

“I knew the merits of building our museum,” he said. “I had faith that either with state support, which had great momentum before Katrina, or, if necessary, taking a longer road through the private sector around the country, Louisiana’s incredible sports history was dynamic enough for our dreams to become reality at some level. What happened was far beyond my wildest imagination.”

Since the Louisiana Sports Writers Association hatched the Louisiana Sports Hall of Fame in 1958, the dreams of many for the Hall ascended to another level in June 2013 with the opening of a $23 million, two-story museum encompassing 27,500-square feet on Front Street in Natchitoches.

Ireland’s first love with sports was as an athlete. He was a four-year starter in baseball at Jonesboro Hodge High School, where he earned all-district as a junior at designated hitter, was student body president and lettered in football as a senior for the 1977 Class AA state finalist team coached by future Louisiana Sports Hall of Famer Don Shows.

Bad knees curtailed his athletic pursuits, but he stayed tethered to sports with writing, radio and publicity endeavors.

His launching pad to his NSU job was an 18-month stint as a sportswriter for the Town Talk in Alexandria, where he captured 15 top-three finishes in the annual LSWA writing contest, including records of nine overall awards and six first places in the 1987-88 competition.

In a bit of irony, the summer before making the move to become SID at Northwestern, he broke the news of an NCAA investigation of NSU basketball as a top of the front-page story.

“Despite my affinity for Northwestern,” he said, “I was proud of the reporting I did and it was a milestone professionally.”

Ireland thrived as a sports information director at NSU. He had a breakthrough year from a national perspective in 1992, when his Demon football media guide won Best in the Nation for Division I-AA from the College Sports Information Directors of America.

“Game notes are an essential tool for sports announcers and writers,” said legendary broadcaster Lyn Rollins, a Louisiana Sports Hall of Famer who has worked closely with Ireland – and numerous other SIDs across the nation — in coverage of sports events for many years. “Doug’s packet was always among the best I’ve seen for utility, relevance, inspiration and uniqueness. My work was consistently enhanced by his.”

Ireland carried over his skill as a writer while working as NSU’s SID. In 1997, he penned a 1997 historical feature marking Demon great Joe Delaney’s induction in the College Football Hall of Fame that earned a second place in a national CoSIDA contest.

Ireland, cracked Rollins, “could find an award-winning feature on the last line of an eye chart – without his glasses.”

During his time at the helm of NSU’s sports publicity, Ireland had many memorable athletes, teams and moments to cover. Among the treasured experiences came as the media relations contact for the Demons of Destiny, the 2005-06 NSU basketball team known for upsetting No. 3 seed Iowa on Jermaine Wallace’s 3-pointer in the first round of March Madness.

“Incredibly,” Ireland says, “that game, and that finish, still resonate today, each March, on the national stage.”

He fielded a few offers, in spite of making no job searches, for higher-profile SID positions. But the relationships within the NSU Athletics family, the university and Natchitoches, along with his commitment to the Hall, were too powerful to leave. So, he never has, and his days with the Demons ended with retirement.

Ireland did an early morning weekday sports report, live by phone, on KZBL-FM during his 30 years at NSU, and on his last day as SID, two years ago, the station surprised him with a 75-minute special at the end of the Friday morning “Jammin’ with Johnny (Earthquake) Show,” complete with call-ins from friends like former NSU baseball coach John Cohen, now the Mississippi State athletics director.

“I did choke up more than twice on air,” Ireland admits.

Teddy Allen, north Louisiana columnist, podcast host, color commentator for Louisiana Tech football and veteran emcee for the Louisiana Sports Hall of Fame induction ceremonies, said he was driving south on I-49 and happened upon that radio show on the car radio.

“It was pennies from heaven,” Allen said. “It just made me feel good. The reason they did it is because everybody loves Doug. My wife loves Doug, I love Doug. Everybody in the Hall of Fame loves Doug. Inch for inch, he’s one of the best we’ve got.

“One person after another – and this is in the middle of the morning – called in and shared Doug stories, and all of them ended good.”