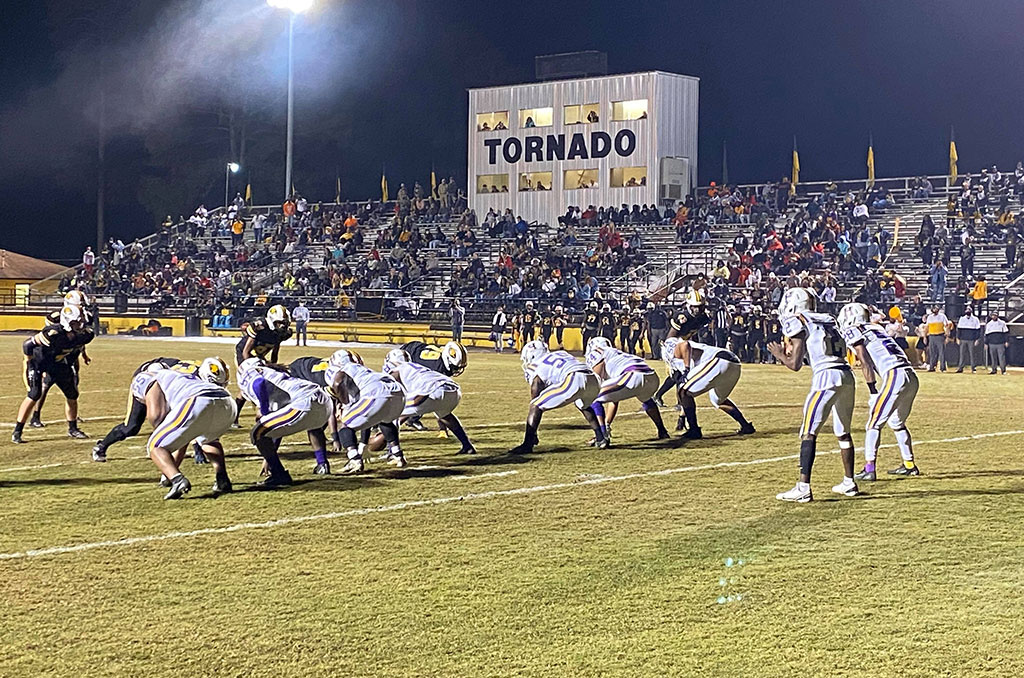 With time winding down in Homer’s 36-8 win over Haynesville Friday night, it was evident that the long-suffering Pelican faithful had not seen enough during the previous two hours to be content with breaking a nine-year drought in Louisiana’s longest–and best–high school football rivalry.

One went so far as to encourage the Homer defensive front to dismember the Golden Tornado players. Although the Pelican defensive ends could not hear the directions of the over-zealous fan, it wasn’t evident by the way they were teeing off on Haynesville quarterback Keith Woodard, who took the licks and continued to get up off the turf at “Red” Franklin Memorial Stadium.

Soon, Homer’s Terrenzo Winzer would put a stop to the brutality by intercepting a Woodard pass, and allowing the Pelican offense to come onto the field for a kneel down or two with less than a half minute left in the contest. If Homer head coach Richie Casey had polled the near-capacity visiting bleachers, the Pelicans would have begged the second-year coach for one more score–or at least an attempt.

When it comes to the Homer-Haynesville rivalry, the feelings which on full display last night are mutual. In Claiborne Parish, this one is personal.

Keith Kilgore, who has been a Golden Tornado fan since he was a little boy and now owns Kilgore’s Pharmacy on Main St. in downtown Haynesville didn’t mince words earlier in the afternoon when talking about the rivalry.

Haynesville head coach David Franklin, who was an all-state defensive back for the Golden Tornado in the mid-1980’s believes the “hate” between the two schools, which are 13 miles away, have been passed down genetically.

Winzer’s late interception was anticlimactic compared to the show he put on in the third quarter. First, out–jumping and out–reaching Haynesville’s Nate Beene to haul in a nine-yard touchdown pass–a back shoulder fade– from Homer’s Takeviunte Kidd with six minutes to go in the third quarter to stretch Homer’s seven point halftime lead to 22-8.

With 37 seconds left in the third quarter, Winzer picked off his first Woodard pass of the night and raced 65 yards down the Haynesville sideline to score and make it 29-8.

“I was just all in the moment,” Winzer said after the game, and pausing his Instagram live post. “I don’t even know what to say. It just felt good. (on the interception) It’s what we practice. Read and react.”

The first half proved to be more competitive.

Homer, after going three and out on their first possession of the game, marched 79 yards to the Haynesville one before a vicious blow by Golden Tornado’s Kedrick Grider knocked the ball from Homer’s Demije Patterson’s grasp. Haynesville’s Tray Kingsby recovered.

A questionable call on Homer’s first long drive of the night elicited an observation from Haynesville’s team doctor– Dr. Eddie Anglin, who was a junior running back on Coach Alton “Red” Franklin’s first state championship team in 1970–fifty years ago.

“He (the referee) must be from Homer,” Anglin said.

Homer’s defensive front was able to turn lemons (the turnover) into lemonade by tacking Grider in the endzone for a safety, putting the Pelicans on the board first.

After receiving the kickoff, Kidd led the Pelicans down the field before finding Jalen Slaughter for a 10-yard touchdown pass. The point after try was wide left.

In the second quarter, Kidd found Xavier Webb on a post route. The senior wide receiver went 93-yards for the score. With 8:11 left in the first half, the Pelicans had a comfortable 15-0 lead.

Woodard and Haynesville wide receiver Demareon Payton made Casey and the Pelicans less comfortable by connecting on an 18-yard touchdown pass with 2:23 left in the first half. Grider scored on the two-point conversion.

“First, I want to give thanks to God, just for letting us play this game,” Casey said after the game. “And I’ve got to give it to Haynesville. That’s a good team, man. Those boys fight. They’re going to always fight. Our boys just came out and played ball. It feels good, man, to win the game like that.”

In this rivalry, history has shown that Homer has a little fight in them as well.

In 1979 at Homer, the Pelican cheerleader squad brought over their counterparts to introduce them to the Homer faithful. Tradition calls for a non-partisan cheer during this exchange, but the Haynesville cheerleaders had something else in mind.

Homer cheerleader Lori Beard, the daughter of Homer head coach Ronnie Beard–coaching in his final game before moving into administration, didn’t retreat. She attacked, and the Homer sideline erupted into a fist-swinging, hair-pulling brawl the likes of which fondly reminded longtime fans of “the good old days.”

Lori Beard is now Lori McFerren and a retired state championship softball coach at North Desoto who–like her father–has a stadium named after her in Stonewall, La.

Forty years ago, Jerry Byrd Sr., the editor of the Shreveport Journal, covered the same rivalry in the same setting. However, he referred to Haynesville’s “Red” Franklin Memorial Stadium as “The Mecca” of high school football in North Louisiana.

The sports writer took his seven year-old son with him that night. And while the boy  liked football before he went with his father that night, he left Haynesville with the game ball–given to him by the legendary coach–”Red” Franklin–and a profound love for the game. The sights. The sounds. The smells of the most intense high school football rivalry in Louisiana history made its mark on that little boy.

My father passed away in April of 2016, but I could feel him with me tonight as I covered the Homer and Haynesville game. I always knew I would make it back, I just didn’t know it would take me 40 years. For me, this one is–and will always be– personal.