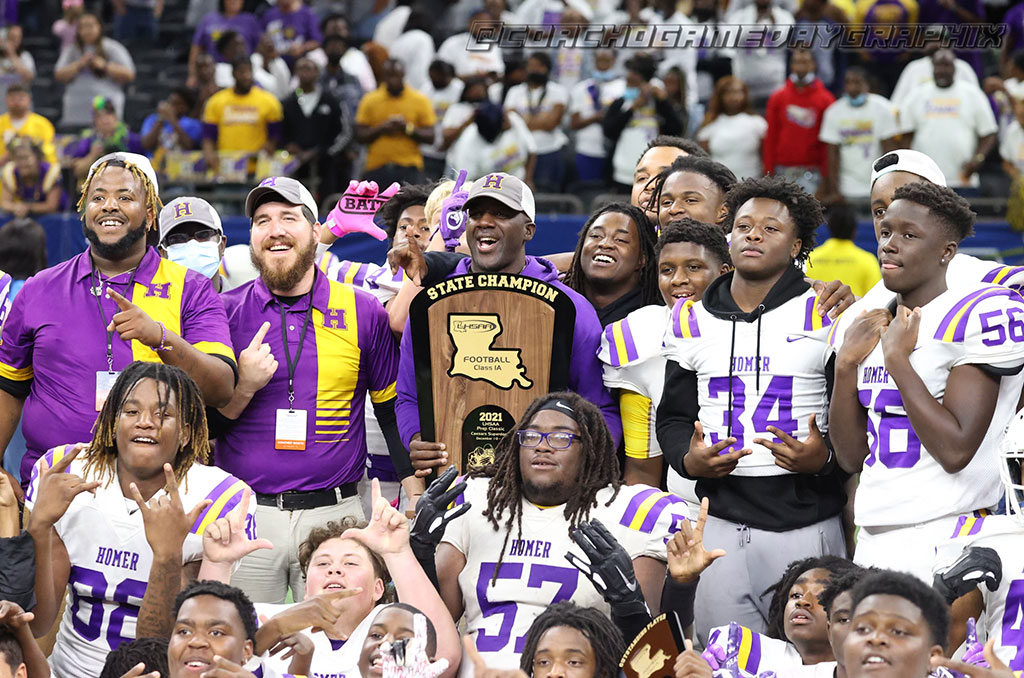 NEW ORLEANS – It’s been 82 years since a Homer High football squad had the opportunity to raise a state championship trophy high above as its hometown crowd cheered them to victory.

The wait ended Saturday afternoon as the Pelicans came out rolling on all cylinders in the first half to take a quick lead that would hold despite multiple comeback attempts from Logansport to win the Class 1A State Championship, 41-28. The victory is Homer’s first state title since 1939 and is the schools fourth overall in history.

The first half belonged to the Pelicans who were near-perfect in all three phases. Homer used its explosive offense to score early but it was the defense that shined as Derron Donnell and Katrevrick Banks returned back-to-back interceptions for a touchdown to give the Pelicans a cushy lead in the first quarter.

Logansport sustained a drive early in the game following an interception on defense. However, the Tigers turned the ball over four times in the first half and were also unsuccessful in two trips down inside the red zone. A Jayven Claybrook touchdown late in the second quarter broke up the shutout as he hauled in a 25-yard pass from Khameron Boykins.

In the second half, Homer did what it would to keep Logansport at bay. However, the Tigers continued to fight, scoring three touchdowns in the final 24 minutes, with Boykins accounting for all three.

Logansport finishes the season with a 9-5 overall mark and becomes the 27th school in championship history with five or more losses to be recognized as state runner-up. The Tigers rode a hot streak of nine consecutive wins following an 0-4 start to the year.

Saturday’s title game broke the all-time classification record for most interceptions by both teams (8) in a Prep Classic game.

Homer’s Ta’Keviuntae Kidd was named the Most Outstanding Player for his team following a huge performance highlighted by three touchdowns that helped the Pelicans to the state title victory. Kidd was 7 of 12 with two passing touchdowns and even ran back a 79-yard kickoff return. In addition, Ely’Jay Curry rushed for 257 yards and one touchdown while Katrevrick Banks and Derron Donnell each returned an interception for a touchdown.

Junior quarterback Khameron Boykins was awarded the Most Outstanding Player award for Logansport after having passed for over 300 yards and three touchdowns as well as a rushing score. Jacob Contario was responsible for 230 all-purpose yards followed by Jayven Claybrook’s 206 all-purpose yards

• 07:17 – HOMER | Ely’Jay Curry took the handoff and sprinted 53-yards untouched into the endzone for the first score of the game. This came following a 40-yard interception return just one play before.

• 01:43 – HOMER | Ta’Keviuntae Kidd tossed a 24-yard touchdown pass to Devante Champ to give Homer a two-score advantage in the game.

• 01:22 – HOMER | Derron Donnell returned a 28-yard interception return for a touchdown that gave the Pelicans a 20-0 point lead.

• 08:24 – LOGANSPORT | Khameron Boykins connected with Jayven Claybrook on a 25-yard pass to cut into the Homer lead just a few minutes into the second quarter.

• 08:10 – HOMER | Kidd bulldozed his way through a throng of Logansport defenders on a 79-yard kickoff return to extend Homer’s lead back to a 26-point cushion.

• 08:03  – LOGANSPORT | Khameron Boykins called his own number and waltzed into the endzone from eight yards out for his second touchdown of the afternoon.

• 05:12  – HOMER | A beautiful pass from Kidd landed perfectly into the hands of Ja’Marquese Hampton from 39 yards out for the Pelicans’ third touchdown reception of the game.

• 10:26  – LOGANSPORT | Boykins connected with Thalemius Hill on a 19-yard pass to bring the Tigers to within three scores of the Pelicans early in the fourth quarter.

• 07:13  – LOGANSPORT | The Tigers were not to be denied and came within two scores of a lead when Boykins tossed his third touchdown of the game on a 76-yard bullet to Jacob Contario.