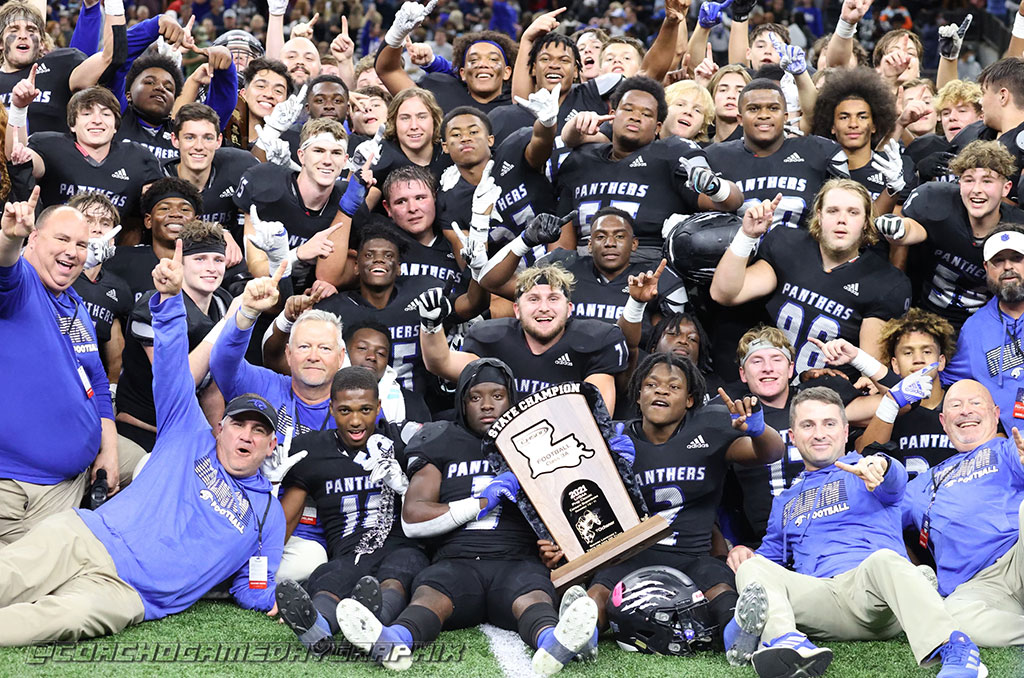 Sterlington can claim that accomplishment but more importantly it can also claim the title of Class 3A State Champion. The Panthers survived a war of attrition with Union Parish, 26-24, in a rematch of District 2-3A foes to capture its second state championship in school history and first since 2016.

The victory also caps off a perfect 15-0 overall record for Sterlington while head coach Lee Doty captured his first state title win as a head coach. Doty now joins Jason Thompson as the only Panther coaches to win a title.

Union Parish seemed to control the ballgame at first with methodical drives that totaled over nine minutes in the first period. The Farmers highlighted the quarter with a 15-play drive that ate up over seven minutes of play time.

However, the highlight of the evening occurred in the second quarter as senior placekicker Jacob Green launched a pair of 40-plus yard field goals to bring Sterlington to within three points heading into halftime. Green’s 46-yard conversion to end the half was just one yard short of tying the Class 3A record for longest field goal in the Prep Classic.

It was late in the game though where business really picked up as the teams entered the final quarter with Union Parish up by three.

However, Sterlington was able to produce touchdowns on its final two drives of the game, including a 21-yard touchdown run from J’Keldric Miller that sealed the contest and the trophy for the Panthers.

Union Parish finished the year with an 11-4 mark despite finishing as runner-ups for the second consecutive season.

Sterlington’s Green was named Most Outstanding Player for his team following a great night kicking from the tee. His two field goals, averaging 43 yards, helped the Panthers in securing the trophy. He was also 2-of-3 on point after attempts and averaged 55.7 yards on kickoffs.

Junior tailback Trey Holly earned Most Outstanding Player honors for Union Parish after a 182 yard rushing performance that included a touchdown. The highly sought after recruit totaled 82 receiving yards on two receptions that included a 75 yard touchdown run. IN total, he led the team with 265 all-purpose yards.

• 09:18 – STERLINGTON | Mason Lawhon didn’t take long to put the first points on the board as the junior quarterback rushed for 26-yards into the endzone to give the Panthers an early lead.

• 02:20 – UNION PARISH | The Farmers responded with a textbook drive that chewed up nearly seven minutes off the clock capped by a Ja’quarius Donald rush. A two-point attempt pushed Union Parish ahead by one point.

• 03:55 – STERLINGTON | Jacob Green converted on a 40-yard field goal to give Sterlington a two-point lead.

• 03:35 – UNION PARISH | On the first play of the next drive, Trey Holly broke loose for a 66-yard sprint up the middle to race into the endzone for the touchdown.

• 00:16 – STERLINGTON | Jacob Green sailed a 46-yard field goal through the uprights, converting his second of the night, to send the Panthers into the half trailing by three.

• 07:48  – STERLINGTON | Bryce Lark gave Sterlington back the lead on a four-yard rush in for playdirt.

• 05:36  – UNION PARISH | Coleton Dison tossed a beautiful 75-yard dart into the hands of Trey Holly who was able to stave off defenders and storm into the endzone. Holly also converted the two-point attempt to put the Farmers up by four.

• 01:07  – STERLINGTON | The Panthers took control late in the game and used up four minutes capped by a J’Keldric Miller 21-yard scamper to give Sterlington the lead and the eventual winning score.