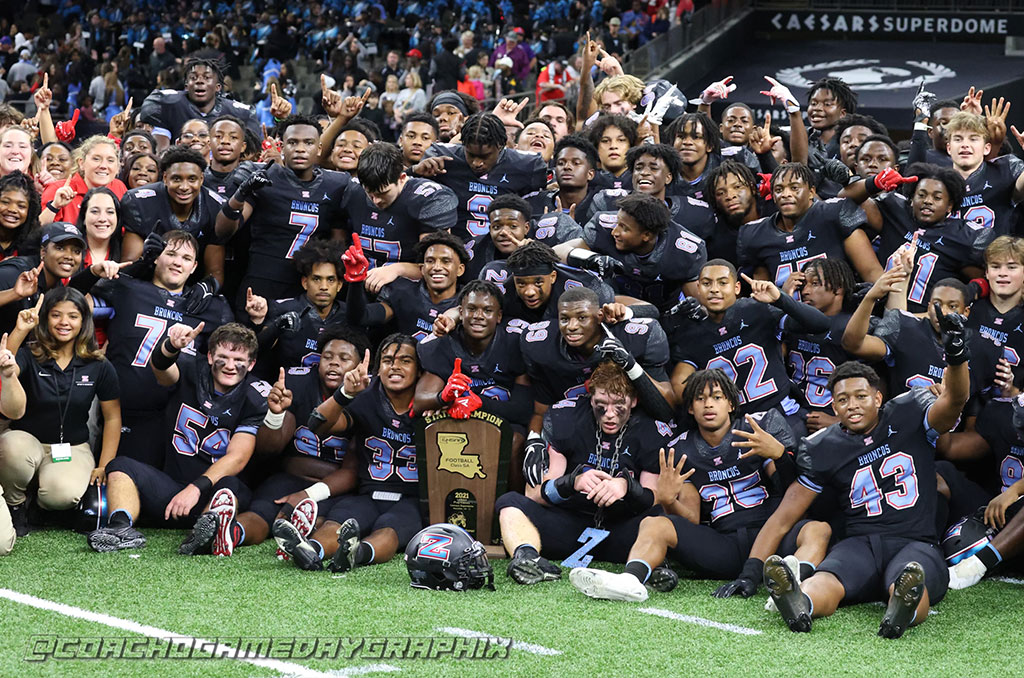 NEW ORLEANS – It was a battle of the giants in Saturday’s LHSAA Prep Classic finale as the Zachary Broncos used a mighty defensive effort to shut down Ponchatoula, 28-20, for the Class 5A State Championship.

The win allowed Zachary to finish undefeated at 15-0 along with its fourth overall state title and first since the 2018 season. In all, the Broncos have now won all four titles over the last seven seasons.

After trading possessions for most of the first quarter, both teams found their groove and the endzone as five total touchdowns were scored between the two. It was back-to-back touchdown runs from Ponchatoula’s Braydon Walker that helped give the Green Wave a six point lead headed into intermission.

In the second half, it was all Zachary’s defense that allowed no points to be scored while forcing Ponchatoula to punt or turn the ball over on all eight drives.

The Green Wave could not create any momentum despite scoring three times in the first half. The last three drives saw the Green Wave turn it over deep in Bronco territory. Ponchatoula finished 12-1 to finish up a spectacular season that saw legendary head coach Hank Tierney win his 300th career game.

On the offensive side, the Broncos delivered amazing performances all over but it was quarterback Eli Holstein who highlighted the night with a record-breaking performance. The senior slinger completed 13 passes for 257 yards and two touchdowns as well as rushing touchdown. His efforts were enough to be named the team’s Most Outstanding Player.

Ponchatoula’s Amorion Walker earned outstanding player honors for his performance on the Superdome turf Saturday night. The senior receiver finished with 143 yards on eight catches for one touchdown and was also the team’s all-purpose leader in yards.

Quarterback Nolan Tribble set Prep Classic records for most passing attempts and tied the record for most completions after finishing 25-for-53 on the night with 307 yards and one touchdown.

• 09:18 – PONCHATOULA | A double-reverse pass from Nolan Tribble found Amorion Walker wide open for a 51-yard touchdown reception to open up the scoring in the final game of the Prep Classic.

• 02:20 – ZACHARY | The Broncos responded with a five-play drive that was capped off by a nine-yard Conner Wisham rush that tied the game.

• 08:48 – PONCHATOULA | A pair of Zachary penalties proved to be costly as the Green Wave took advantage to extend its drive and end with a 4-yard touchdown rush from Braydon Johnson to gain the lead back.

• 04:01 – PONCHATOULA | Braydon Johnson finished another productive drive thanks to a Zachary turnover as he rolled into the endzone from three-yards to score his second rushing touchdown of the evening.

• 03:30 – ZACHARY |Eli Holstein responded on the next drive with a 36-yard touchdown pass complete to Jordan Williams to cut the Ponchatoula lead down to just six points.

• 09:05 – ZACHARY | It was the Broncos who took advantage of a Ponchatoula turnover as Eli Holstein called his own number from the one yard out to help regain the lead early in the second half.

• 06:22 – ZACHARY | Standing inside a pressure cooker full of Green Wave defenders, Eli Holstein kept cool and connected with Tylon Williams on a 51-yard touchdown pass to up the Bronco lead by eight points.