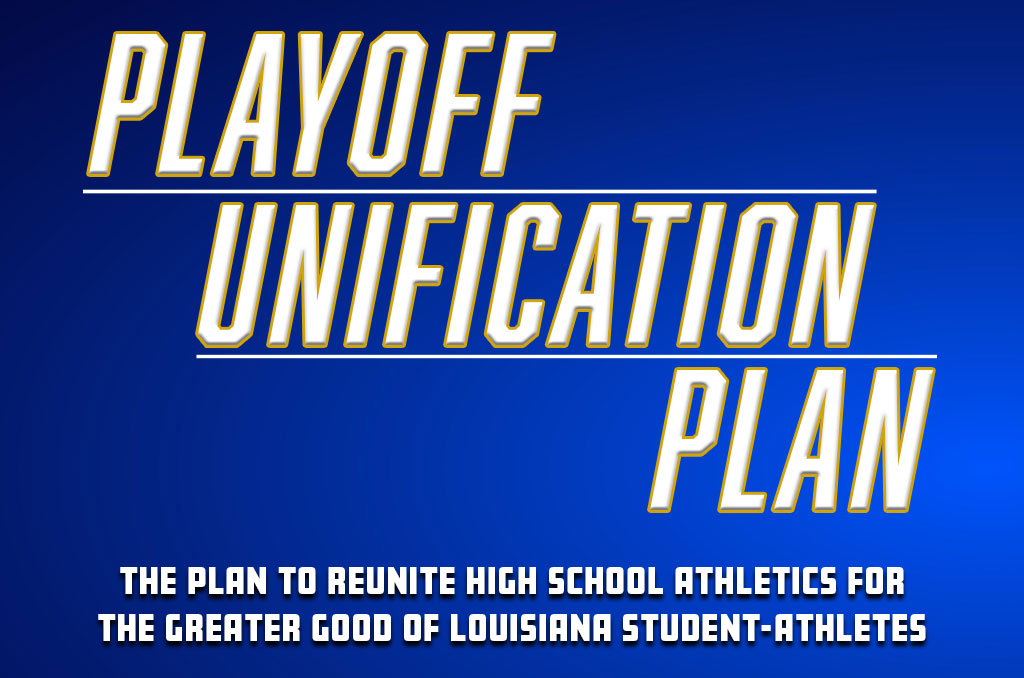 LAKE CHARLES – The time for healing within the Louisiana High School Athletic Association is now.

Since the member school principals first voted to divide the public schools and private schools for the sports of football, basketball, baseball, and softball, there has been much debate and argument as to whether all schools should be brought back together.

It has been eight years and there has been no proof of parity following the split. One of the most obvious reasons for the current format is that a majority of non-select schools are competing for championship honors in what many feel is an unlevel playing field, most notably in relation to school attendance zones.

The integrity of the playoffs was put into question following the split of the four major sports in Louisiana. The purpose of the split was not to allow more teams in the playoffs but to give championship-level programs a legitimate opportunity to be recognized as a champion.

It seems that even for the Non-Select side that the legitimacy of teams having a chance to advance to play for state title is a bit skewed.

From 1999 until 2012, the LHSAA recognized 70 football champions, 36 of which were public institutions. Out of 140 teams to make an appearance in the finals, 79 held from the public side of the aisle.

Following the split in 2013, only nine public schools have appeared in the LHSAA Prep Football Classic for the first time in school history.

Some say the current playoff format is too watered down, doesn’t make sense and the recognition of a “true” champion isn’t possible.

What if it can?

A few years back, Dunham football head coach Neil Weiner introduced a plan that called for the uniting of the association. Despite sharing the plan with multiple administrators across the state, the idea was ignored and never brought up for discussion.

GeauxPreps.com recently spoke with Coach Weiner regarding his proposal. With his permission, we have decided to give the idea a platform to be shared and discussed.

A NEW VISION FOR THE FUTURE OF LOUISIANA HIGH SCHOOL SPORTS

We present the “Playoff Unification Plan”, a call to consolidate both public and private educational institutions for the common good of all student-athletes in Louisiana.

In this plan, the idea calls to bring all schools back together for the postseason while also keeping the non-select and select divisions. An undisputed champion would be crowned in each class following a division championship on each side that includes a field of 16 teams representing the non-select schools and another division consisting of 16 representatives from the select side.

A PLAN TO UNITE AND PRESERVE EQUALITY

Weiner’s main focus was to reduce the number of teams to advance into the postseason, cut the number of overall championships down while crowning both a non-select and select champion, restore the integrity of each sport’s playoff and create financial equality for both sides.

The “Playoff Unification Plan” would allow all schools, regardless of label, the potential of playing in front of their fans once or twice more while also earning the same amount financially through the postseason.

As far as the actual placement of playoff teams is concerned, although each side (Division) of the bracket is reduced to 16-teams, the new plan eliminates the “black-eye” of team who has a losing record from entering the playoffs.

Although the main focus always rests on football, Louisiana’s other top high school sports could possibly benefit from the playoff unification plan.

Championship games for girls basketball, boys basketball, baseball and softball currently stand at 12 (Classes 5A through Class C & Divisions I through V). If a unification plan is passed, it brings the number of championship games back down to seven thus making for a more competitive postseason in each class.

In fact, there could be a case for combining Classes B & C for the above sports in order to reduce the number of championship games while also providing for a fair number of teams to advance.

Under the current plan that splits the two sides, Division V (B & C select schools) consists of up to only 10 teams at times depending on classification numbers. There is not much sense to have a division consist of just a few schools who may only play two or three games when they could have the chance to play for more plus a total of two championships within one season.

Weiner’s plan opens the door for uniting the association once again but to do so in a carefully planned scenario.

Keep the non-select and select championships intact but close out each postseason with “The Granddaddy of Them All”, “The Big Game”, whatever you may want to call it. Let each division champion play for the undisputed crown.

It gives the state of Louisiana a chance to produce some of the greatest, most competitive contests in the country. It provides even more memories for a school’s fan base, student-athletes, parents and coaching staff.

This unification plan allows student-athletes to compete against the best talent in the country. A few more games would mean the world as far as collegiate recruiting is concerned.

Weiner’s vision may not be what people want but it allows for high school athletics in Louisiana to take a turn in the right direction and become somewhat normal again.

Get in on the discussion by accessing our social media platforms on Twitter (@GeauxPrepsLA) and Facebook (GeauxPrepsLA). Let us know what you think or what you would do differently!