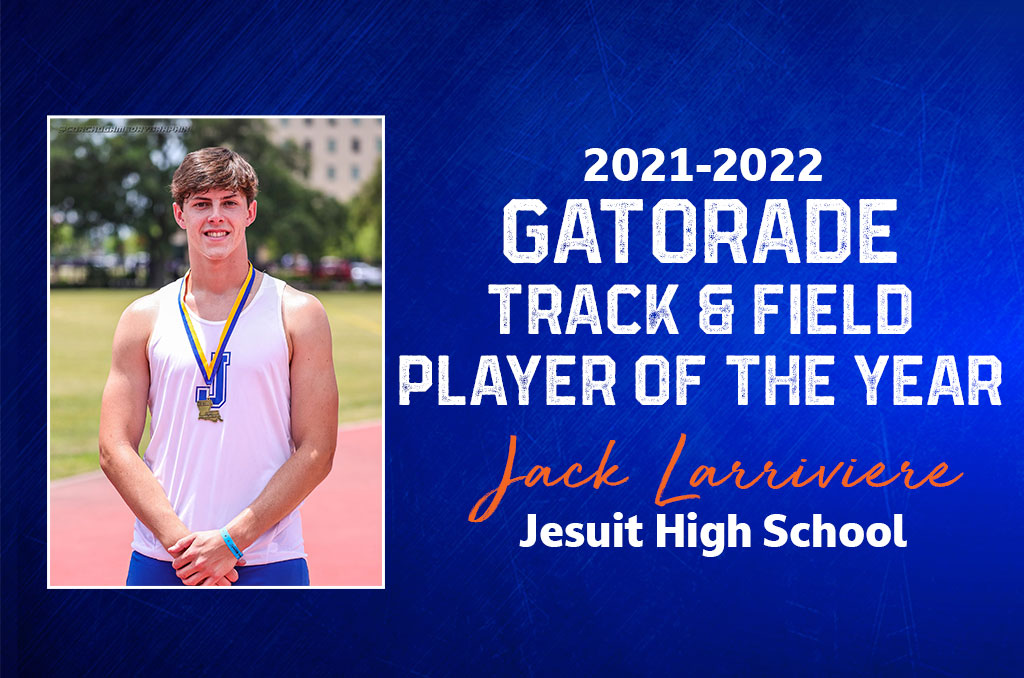 The award, which recognizes not only outstanding athletic excellence, but also high standards of academic achievement and exemplary character demonstrated on and off the field, distinguishes Larriviere as Louisiana’s best high school boys track & field athlete. He now advances as a finalist for the prestigious Gatorade National Boys Track & Field Player of the Year award to be announced in July.

The 6-foot-3, 210-pound senior set a new state record in the javelin throw, launching it 228 feet, 10.5 inches to win the Class 5A title and help the Blue Jays to a third place finish as a team. Larriviere’s effort ranks No. 16 in American high school history.

In ascending to the rank of Eagle Scout with the Boy Scouts of America, Larriviere has donated scores of volunteer hours to food drives for people in need, environmental conservation efforts and community-improvement projects. “Jack did not pick up a javelin for the first time until this past February and three months later, he shattered the existing state record,” said Jesuit head coach Rudy Horvath. “In the much-too-short time I’ve had the pleasure to work with Jack, I can say that he is, hands-down, the best athlete I’ve ever coached. More important than his athletic ability, Jack is a young man of tremendous character. He strives to be the best in any endeavor whether it be the classroom, at practice, or during competitions.”

Larriviere has maintained a 3.87 GPA in the classroom. He has signed a National Letter of Intent to compete on an athletic scholarship at LSU this fall.

Gatorade has a long-standing history of serving athlete communities and understands how sports instill valuable lifelong skills on and off the field. Through Gatorade’s “Play it Forward” platform, Larriviere has the opportunity to award a $1,000 grant to a local or national organization of their choosing that helps young athletes realize the benefits of playing sports. Larriviere is also eligible to submit a short video explaining why the organization they chose is deserving of one of twelve $10,000 spotlight grants, which will be announced throughout the year. To date, Gatorade Player of the Year winners’ grants have totaled more than $3.5 million across more than 1,300 organizations. Since the program’s inception in 1985, Gatorade Player of the Year award recipients have won hundreds of professional and college championships, and many have also turned into pillars in their communities, becoming coaches, business owners and educators.