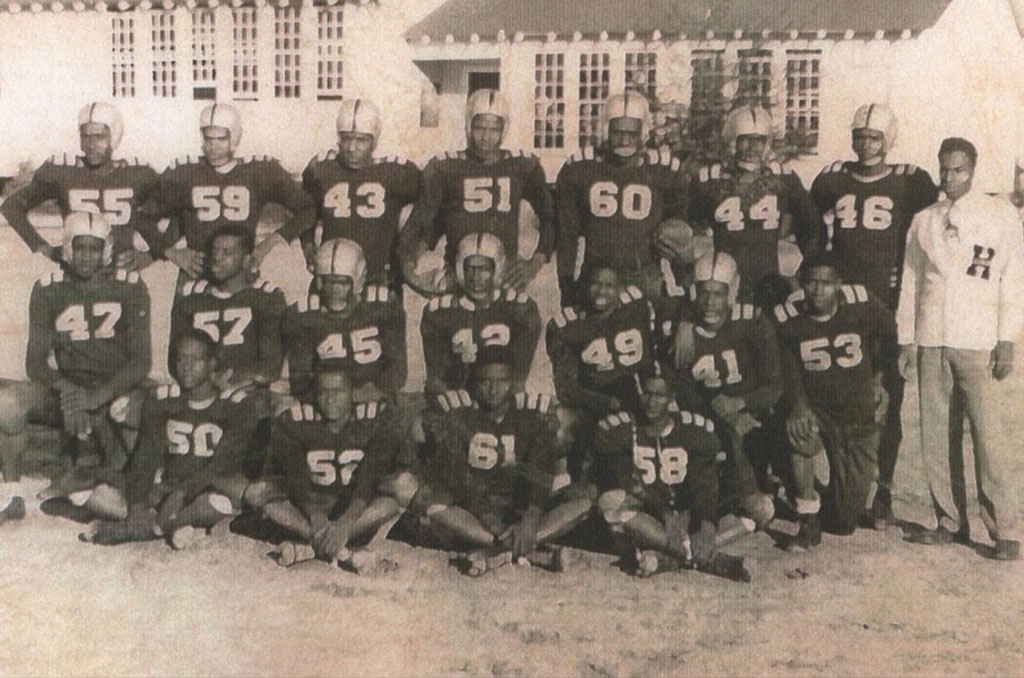 Editor’s Note: A special thank you to Crosby Beene, Jr., Woodson High School historian. Your knowledge and support of the Mighty Tigers helped shine a light on a football program that helped shape a legacy that will never be forgotten. Thank you for sharing that knowledge with me.

Those two questions present curiosity about Haynesville’s history as a football town. Up until the late 1960s, blacks and whites did not attend school together nor did they play on the same football team. The two schools, Haynesville High and Woodson High, never met on the same field for any sports activities. However, both schools enjoyed success and Woodson High’s talent would help pave the way for success both on and off the football field upon the consolidation of the schools in 1970.

Some 14 years after becoming a high school in 1932, Woodson’s football program was started in 1947 by its new principal, J.E. Williams who recruited Winzer Turner, a star football player under Coach Eddie Robinson at Grambling.  It was under Turner’s tenure that the school adopted its mascot, the Tiger, and the students were proud to acknowledge Haynesville Woodson High School as “Home of the Mighty Tigers.”

After having laid a solid foundation for the school’s football program by having three consecutive winning seasons during his tenure, Turner passed the mantle in 1950 to T.J. Cooper, who in his first season at the helm, led the “Mighty Tigers” to an undefeated season with a record of 12-0. His team allowed no opponent to score and won its first Black High School Class B State Championship Title.

The title game was played in Haynesville at the Bonnie Mitchell Rodeo Arena. Those who played on the team reminisced that on almost every down, they would be spitting out a mouth full of dirt because there was no grass on the playing field. During halftime, some of the team players had to assist in restriping portions of the field.

It was the town of Haynesville’s first championship in football since Haynesville High’s Golden Tornado won the Louisiana High School Athletic Association (LHSAA) title in 1936. After this astonishing season, interest began to rise, and more fans of both races flocked to see the Mighty Tigers football team.

Due to segregation, the Tigers football team was prohibited from participating as a member of the LHSAA. Instead, it participated in the Louisiana Interscholastic Athletic and Literary Organization (LIALO), but the Tigers were just as determined to make a name for themselves in the local community, Arkansas, Louisiana, and Texas areas.

The one score made by Boston was the only score against the Mighty Tigers in conference play for the season. The state championship game was played at the Haynesville Memorial Stadium under the sponsorship of the Golden Tornado Quarterback Club and the Waller-Bond American Legion.

Even though the contest was played under the supervision of LIALO, all black football fans from both schools were required to sit on the visitors’ side of the stadium while white football fans sat on the home side.

The Mighty Tigers won their third and final state championship title in 1955 in a close and exciting game against Washington Parish Colored High School of Franklinton. Lights were installed and for the first time in school history, the Tigers played their first night game at home. Although Haynesville received 170 yards of penalties to 20 yards of penalties called against Franklinton, the Tigers managed to eke out a close 14-13 victory. The Mighty Tigers’ first score came on a safety caused by guards Bobby Logan and Joseph Kirkpatrick.  Willie Buggs scored the two winning touchdowns for the Tigers with a 15-yard run and a 40-yard interception.

It was also the final football game that Coach T.J. Cooper would be on the sidelines coaching for the home team as he resigned the following spring leaving behind an impressive winning record of 58-5-2.

Over the course of the next decade, the Tigers would advance to the state playoffs three more times, finishing as the Class 1A runner-up in 1959. The program finished undefeated in 1956 and 1957 but was ruled ineligible for postseason competition due to clerical errors by the school’s administration.

The 1969 season was the end of 22 years of football for Haynesville’s Carter G. Woodson Mighty Tiger squad. They returned to their winning ways by competing for conference playoffs but unfortunately lost to Charles H. Brown High School of Springhill.

Those who attended Woodson High School from the early days right up until the end of segregation carried much pride for their beloved school. But much more than that, they laid a foundation that would help jump-start another football program right down the road.

The success of the Woodson Tiger football team transitioned into success for the Golden Tornado program. In 1970, when all state public school’s fully integrated, the students from Woodson were transferred to Haynesville High School.

For the first time in the history of the town, black kids and white kids would play football together.

The desire to win that was taught to the young African-American football players at Woodson partnered with the desire and motivation to win from a young, up-and-coming head coach named Alton “Red” Franklin helped spark the Golden Tornado back into a winning machine.

Just months following integration, the Golden Tornado cruised through the 1970 season undefeated, capped with a win in the Class 2A finals, to capture the town’s first football title since segregated Woodson High’s 1955 championship season.

On that memorable, cold December night within the confines of Haynesville’s Memorial Stadium, blacks and whites proudly cheered their team to a championship win, gathered together on one side of the stadium.