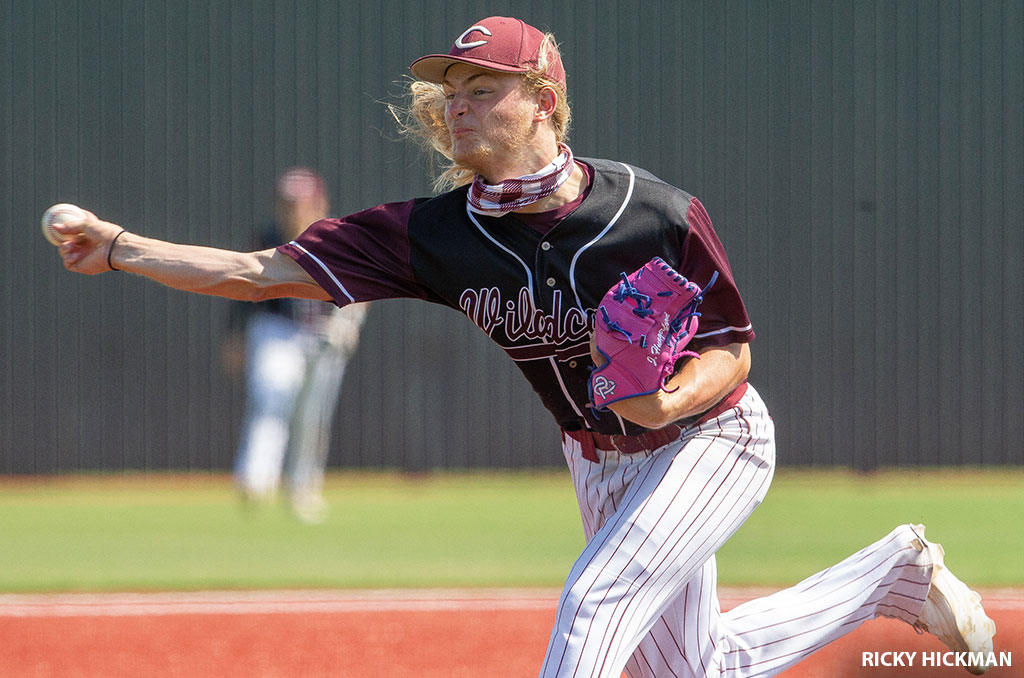 The pitching duo of Braden Trull and Casey Tilley combined with the hot-hitting Eagles offense that rattled off 12 hits were enough to send Rosepine past Many, 14-0, Wednesday in the Class 2A semifinal game.

Trull was credited as the winning pitcher after having worked four innings and surrendering just one hit in the process. Tilley relieved Trull in the final frame and allowed just one hit on his way to securing the shutout victory.

Three Eagles finished the day with multi-hit efforts highlighted by Jake Smith who finished just shy of the cycle with a double, triple and a homer on the day along with four RBIs. Ethan Frey smacked a two-run homer in the second inning to add to the lead. Aden Cline drove in three runs in the game on two hits.

Jack Deville was the losing pitcher for Many after working just 1.1 innings and giving up seven runs on seven hits.

In a game too close for comfort, the Doyle Tigers used a fifth inning, two run single from Braden McLin to snap a tie with No. 2 seeded Springfield and advance into the Class 2A title game for the second year in a row where they will meet Rosepine in a rematch of last year’s game.

The Tigers opened up the scoring in the second inning on a Abedn Kennedy single to go up 1-0.

In the fourth inning, Springfield tied the game up at 2-2 following a fielder’s choice play from Ethan Anthony.

Doyle’s Peyton Woods was credited with the win after having surrendered just two runs on seven hits in 6.2 innings worked.

Blake Lobell went seven innings for the Bulldogs where he allowed four runs on five hits and struck out 10 batters.

Grand Lake’s bats came alive in Wednesday’s semifinal game against Logansport where the Hornets collected 10 hits and 11 runs on the way to a consecutive appearance in Friday’s Class 1A state title game.

Devin David was credited with the victory for Grand Lake with three hits and one run allowed in six innings while having struck out eight batters.

Garrett Walker (4) and Luke Davis (2) led the hitting effort for the Hornets. Perhaps, the highlight of the game, came on a fifth-inning, inside-the-park homerun that helped drive in three runs, increasing the Grand Lake lead to a 9-1 score.

The Hornets added two additional runs in the sixth to finally take home the run-rule victory.

Kamon Parker took the loss for Logansport after 3.2 innings of work where he allowed six hits and six runs. The Tigers were limited to three hits in the game and committed six errors.

Oak Grove’s quest to repeat as Class 1A state champions continues as the Tigers overcame a three-run deficit to take home a 5-3 win over No. 2 seeded LaSalle in the semifinal round.

The game was tied at three heading into the fifth inning but it was Luke Simmons’ walk that sparked the magic that the Tigers needed as they scored two runs to take the lead over the LaSalle.

In total, the Oak Grove tallied 10 hits on the evening with Jackson Bradley and Kaine Forman leading the way with multiple-hit efforts. Bradley went 3-for-3 to lead at the plate.

LaSalle was led Clark and Jones who each had two hits on the day as the Tigers collected eight total hits.

Converse used a five-run barrage in the first inning of Wednesday’s Class B semifinal game while starting pitcher Jacob Hungerford limited No. 1 seeded Quitman to three hits and two runs to advance to its first state championship since 2019.

The Wildcats (18-7) look to make history in their bid for the school’s first state championship since 1986 when they face off against No. 2 Choudrant on Friday at 2 p.m.

In the top of the first, Judge Boudreaux delivered a two-run RBI on a single while Cardyn Craig drove in two more to highlight the inning and give Converse a huge lead to start the day.

Quitman cut into the lead with a run in the next two innings to make it a 5-2 contest as Riley Duck and Ty Simonelli scored runs.

However, the Converse widended is lead in the third and sixth innings with a double from Austin Burr and a home run from Cameron Craig to help seal the game.

An error on the last out of the eighth inning gave Choudrant the walk-off it was looking for to help keep it’s hopes at a championship repeat alive as the Aggies defeated Anacoco, 5-4, to move into the Class B state title game.

With the game tied at 4-4 with two outs, Choudrant’s Bryce McGuire hit a grounder that raced through the glove of Anacoco’s shortstop, allowing Eli Callender to score from second to end the game.

McGuire also picked up the win with five innings of work and only one earned run allowed on five hits along with four strikeouts.

Choudrant knotted the game up at four in the bottom of the seventh inning. Swift’s sac fly scored one run for Choudrant

Taylor took the loss for Anacoco. The righty allowed zero hits and one run over two-thirds of an inning, walking zero.

Hornbeck will have a chance to repeat as Class C champion on Friday after shutting out Simpson, 2-0, in the Class C semifinal.

The Hornets’ used a superb pitching performance from Brayden Addison who allowed no runs and just one hit while striking out nine to complete the shutout.

Devyn Sharp’s RBI single in the third inning put Hornbeck on the scoreboard. Sharp led the hitting effort on the day with two hits while driving in both runs.

In the fifth inning, a double from Sharp drove in Jaren Mitchem to score and make it a 2-0 ballgame that would eventually give Hornbeck the lead it needed to move into the final round.

For the second year in a row, Hicks will play for the Class C state championship after run-ruling No. 2 seeded Calvin, 11-1, Wednesday evening.

The Pirates were led by Hayden Doyle’s four-inning effort where he allowed just one run despite seven hits given up. Zach Haymon, who closed the game out on the mound for Hicks, led the team at the plate as well with two hits.

Brad Pelt drove in three runs on the day and got things going in the first inning as he singled to score two runs.

Hicks tallied 10 hits on the day while Calvin collected nine hits. Calvin’s Spangler took the loss for the Cougars with four runs and four hits given up in one inning.