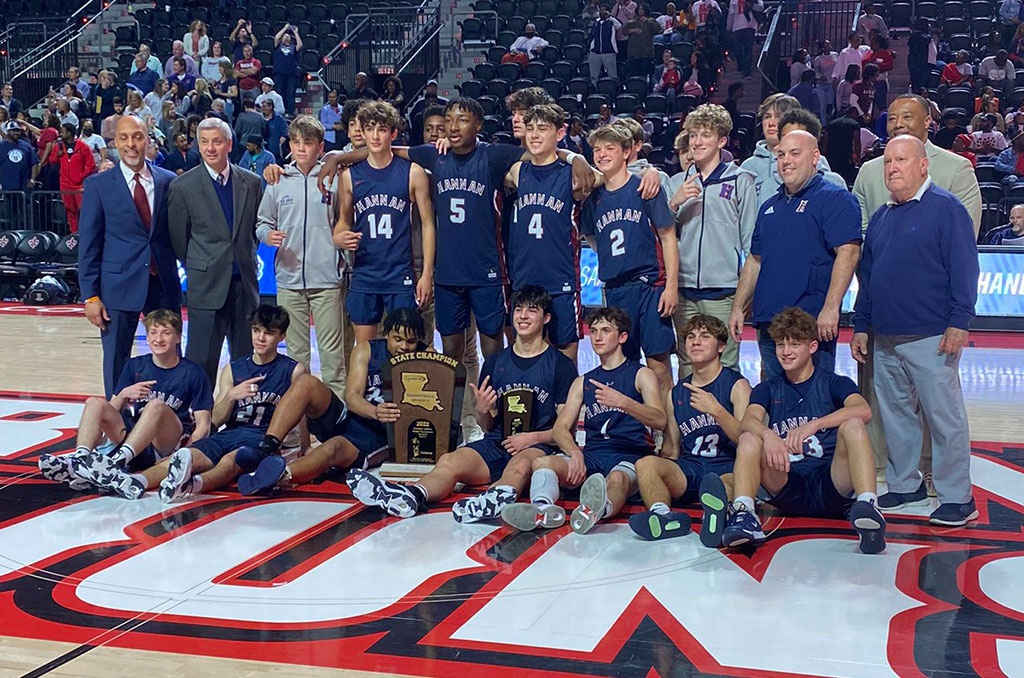 LAFAYETTE – The LHSAA Select Boys Basketball Tournament closed out in a big way Saturday with the crowning of five champions across all divisions.

The contest was a rematch of last season’s Division V title game in which Jehovah-Jireh took the victory by three points.

Bryson Martin scored a game-high 17 points along with five assists and four rebounds for the Flames while Chance Martin (16) and Tyler Flugence added double-digit scoring efforts.

For Jehovah-Jireh, Michael Bougere had 16 points while JP Ricks finished with 11.

In the second game of the afternoon, Southern Lab claimed its first crown since the 2005 season as the Kittens held off a determined Calvary Baptist squad in a 57-54 battle for the Division IV title.

The loss resulted in the Cavaliers settling for the runner-up trophy for the third year in a row while Southern Lab claimed its first title in its last three attempts.

Tyler Ringgold led the Kittens with 15 points while J.T. Curry and D’Lloyd Joseph each added 10 or more points.

Calvary’s La’Bree Williams, Jr., scored a game-high 27 points, shooting 11-of-13 from the charity stripe, and added six rebounds and two blocks. Martin McDowell was the only other Cavalier to score 10 points or more.

The last time a Newman boys basketball team experienced a state championship celebration, head coach Randy Livingston was present to see it. That is because the former two-time Gatorade Basketball Player of the Year was a member of the last state title team at the New Orleans school back in 1993.

Fast-forward three decades later and Livingston now has the privilege to celebrate as a state championship-winning coach for the Greenies following a 56-47 win over Lafayette Christian in Saturday’s Division III title game.

Newman is now tied for third all-time with 10 basketball titles along with Redemptorist.

Canin Jefferson led the scoring effort for the Greenies with 19 points and two assists while Chris Lockett, Jr. added 15 to the stat sheet.

Scotlandville is no stranger to playing in state championship games.

The Hornets rode into Saturday on a 13-game appearance streak that dates back to the 2010 season. That experience is what helped them to a 62-58 victory over John Curtis Saturday afternoon to claim the program’s eighth state title.

Rayvon Smith led the game with 18 points and five assists while three of his teammates finished in double-digit scoring to help Scotlandville to the win.

It was a tightly-contested game throughout the evening with both squads knotted up at 42-42 headed into the final period. However, it was the Hornets who outscored Curtis, 20-16, in the fourth quarter to claim the title.

In, what was perhaps, the biggest upset of the evening, Archbishop Hannan upset No. 1 seed Liberty Magnet, 81-60, in the Division II state title game for the program’s first championship.

The Hawks came out firing on all cylinders in the first half with a 34-15 advantage. Despite a second-half comeback from the Patriots, Hannan was able to continue its scoring attack and eventually drive away for the title win.

Drew Timmons was on fire for the Hawks with a 31-point effort along with seven rebounds, three assists, three blocks and a steal. Semjai McClendan added 20 points and five rebounds to the championship winners.

For Liberty, Cameron Newman led the team with 15 points and four rebounds. Jacob Wilson was the only other double-digit scorer with 14 points.