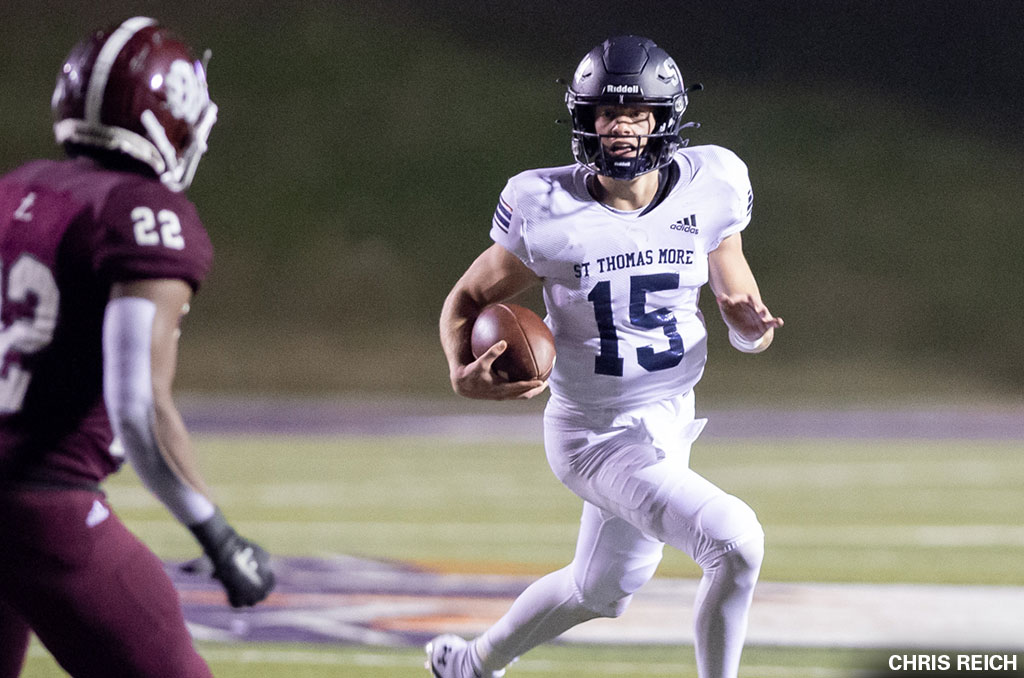 Who are some of the top high school quarterbacks to watch for this season?

GeauxPreps.com takes a look at a few of the state’s most eye-catching quarterbacks who will be sure to keep fans cheering, opponents on their toes and collegiate recruiters foaming at the mouth.

Christian Arceneaux stepped up in a big way as a sophomore after the starting quarterback went down due to injury. The former tight-end turned gunslinger has never looked back, earning district Offensive MVP honors after having passed for over 1,500 yards and 17 touchdowns last season. The senior QB is primed to showcase his talents during the upcoming season and help guide the Gators back into the postseason.

Expect the offers to keep rolling in for one of the most dynamic players in the Class of 2022. Zeon Chriss is ready to lead the charge in 2021 to help defend a dominating state championship run from a year ago. Despite a shortened season due to the COVID-19 pandemic, Chriss showed out with over 2,000 passing yards and 40 touchdowns on the way to leading his school to its first-ever state title.

Woodlawn of Baton Rouge is expected to be a major player in District 5-5A this fall because of Collins. He threw for nearly 1,500 yards and 16 touchdowns in only five games last season. Collins is being touted as one of the best up-and-coming signal-callers in the state and with a good amount of the talented receiving corps returning, Woodlawn could very well have one of its best seasons in school history.

The four-star quarterback has been offered by virtually every SEC powerhouse but announced his commitment to play for the Aggies of Texas A&M. Holstein helped lead Zachary to the quarterfinals as a sophomore last season where he completed 62% of his passes for 1,600 yards and 10 touchdowns. Holstein has the arm-strength and awareness out-of-the-pocket to help lead Zachary to another deep run in the postseason.

Walker Howard is no doubt the top-rated player in the state and he has the numbers to back it up. The future LSU Tiger threw for over 3,000 yards and 35 touchdowns in his first year as the starter for St. Thomas More, leading the Cougars to a 10-0 record and Division II state championship. The five-star chose LSU over programs such as Alabama, Baylor, Nebraska, Penn State and USC.

Landry Lyddy is one of the most underrated quarterbacks in the Class of 2022 group even though the Louisiana Tech commit led the state with 3,566 passing yards last season along with 43 touchdowns. The Class 1A Most Outstanding Player completed 65% of his passes to help lead Calvary Baptist to its first state title in six years. Expect bigger numbers for the pro-style QB this season who looks to turn the heads of the programs who looked past him.

There is royalty in the name Manning when it comes to football in Louisiana. Arch, the grandson of Saints great Archie Manning and nephew of Super Bowl winning quarterbacks Peyton & Eli, is one of the hottest names among the uncommitted recruits for the Class of 2023. He is entertaining 12 offers from some of the biggest programs at this point in time, including LSU, Clemson, Alabama, Texas, Notre Dame and Georgia. The Newman quarterback passed for 1,922 yards and 21 touchdowns last season and looks to help lead his team to a deep playoff run once again in 2021. His natural instincts and ability to effectively throw the ball will only help his raise his stock as collegiate programs continue to vye for one of the nation’s top recruits.

Brother Martin’s Garrett Mmahat grew up fast when he took over the starting QB spot as a freshman due to an injury to the starter. Since then, the New Orleans native has started more games than any other passer in Crusader program history. His ability to make smart decisions in the pocket and determination to get outside and make plays on his feet will no doubt land him on the watchlist for multiple Division I programs.

The dual-sport athlete excels no matter if he is on the gridiron or the baseball diamond. Reese Mooney has developed into one of the most versatile and smartest quarterbacks in the Class of 2023. He is drawing interest from programs such as Nebraska, Miami and George Tech due to his ability to lead the offense by controlling the pace of the game and make good decisions in tight situations. He has also drawn offers to play collegiate baseball for his work on the mound. Despite only playing five games last season, he managed to throw for over 1,000 yards and 11 touchdowns.

A.J. Samuel has drawn just two offers thus far but no worries because this dual-threat quarterback will have college recruiters attention by the end of the 2021 campaign. Samuel stands at just 6’0′ and weights only 170 pounds but his presence on the field commands the attention of his teammates and his foes across the line of scrimmage. Samuels was amazing on the field during his sophomore season where he accrued over 3,000 passing yards and 37 touchdowns. Expect the same numbers, if not, bigger as he enters his junior season with one mission. Lead his team to a state title and gain the attention of recruiters nationwide.