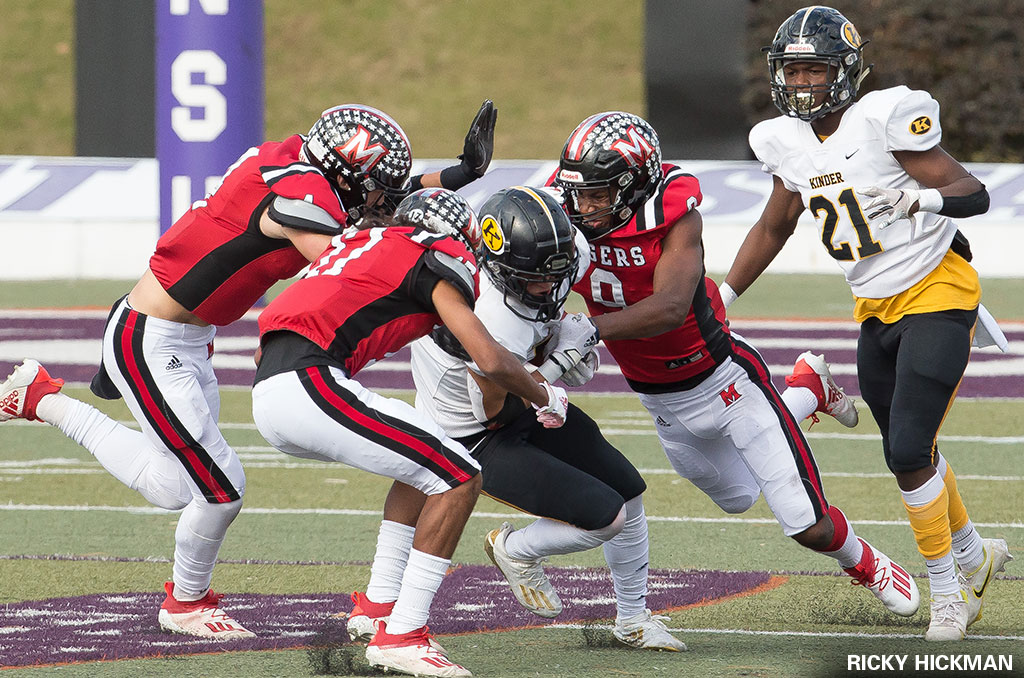 The linebacker position has produced many of the greatest players at each level of football. We take a look at some of the student-athletes who have the potential to be one of those household names in the future.

Tackett Curtis is perhaps one of the hottest names in Louisiana high school football. The four-star recruit has received over 40 offers from some of the biggest programs in college football. His performance on the gridiron, no matter which position he plays, is hard to ignore and has sparked interest from top collegiate programs such as LSU, Texas A&M, USC, Michigan. He totaled 92 tackles and four interceptions last season and expects to play an integral part in helping lead Many back to a state title appearance in 2021. Not only will opposing teams have to worry about dodging him on the defensive side but now they must develop a game plan to stop the new starting quarterback for the Tigers.

Edwards’ size and speed are what give this West St. John defender the ability to get to the ball quickly no matter where he is located on the field. The three-star athlete has received offers from numerous schools with some recruiting analysts having him leaning towards Mississippi State. There is no doubt that his stature sets him apart amongst Class 1A foes and makes those in higher classifications think twice before meeting up with him in open space.

Harold Lawson will play a huge part in helping to lead Catholic back to championship gold in 2021 as the junior linebacker uses his quickness and awareness to reach the defender quickly. Look for Lawson to gain some attraction in the recruiting phase this season.

Masey Lewis is drawing offers from around the country and could be an effective weapon of choice for a school such as UL-Lafayette, which is located in his backyard. Lewis can do it all for the Knights whether it be rushing towards the attack or prowling along in the deep open field ready to interrupt a would-be completion. Look for Lewis’ stock to rise even more as Lafayette Christian faces one of its toughest schedules in the program’s short history.

Tory Morgan is another linebacker worth making the drive over to New Orleans to go see this fall. Morgan, who has received numerous offers from schools such as Mississippi State, Memphis, UTSA, and McNeese State, had 131 tackles and 17 sacks as a junior last year and is determined to lead the Cougars back to the state championship for a sixth consecutive season.

Okoye is a potential all-state selection that could do a ton of damage to the offense this season as the Liberty Patriots enter their first varsity season. Okoye led his team in tackles last season with 72 solo tackles and two sacks. His leadership role will be effective in helping lead Liberty into the postseason in their first year on the varsity scene. Look for the Class of 2023 athlete to make big strides and set the world on fire this fall.

Roman Pitre will lead a defensive unit that is chock full of returning experience as he looks to get the University Cubs back to a state title appearance. The Purdue commit has experience playing in multiple spots and will use what he learned over the course of his prep career and apply that in making the most out of his senior season. The Boilermakers are sure to get a hard-working defender, determined and ready to go out and leave a legacy for his school.

Daylon Sibley has drawn a few offers so far but will have plenty of opportunities to showcase his skills and prove to other universities around the country what he can do on the gridiron. With Lake Charles Prep primed for a deep playoff run, Sibley has a chance to lead his teammates to history as the Trailblazer’s leading tackler from last season is ready to go out and prove that he is ready for the next step. He has been offered by Arizona State, Grambling, and Memphis.

Jordan Toaston is another Catholic defender who could help play a key role in keeping the Bears in the state title picture come this fall. Toaston and Lawson could make a terrific, tortuous pair of linebackers that could plague any sort of offensive attack from their opponents. Keep an eye on the 6-3, 230-pound defender this season as he could be a familiar name in the future.

Delvin Whitaker is a 6-3, 250 pound inside linebacker that punishes those who dare to cross his path. The hard work that he has and will continue to put in has drawn the likes of programs, including Florida State. Although young, Whitaker can be a playmaker and will have his unit ready to perform at its highest level come September.