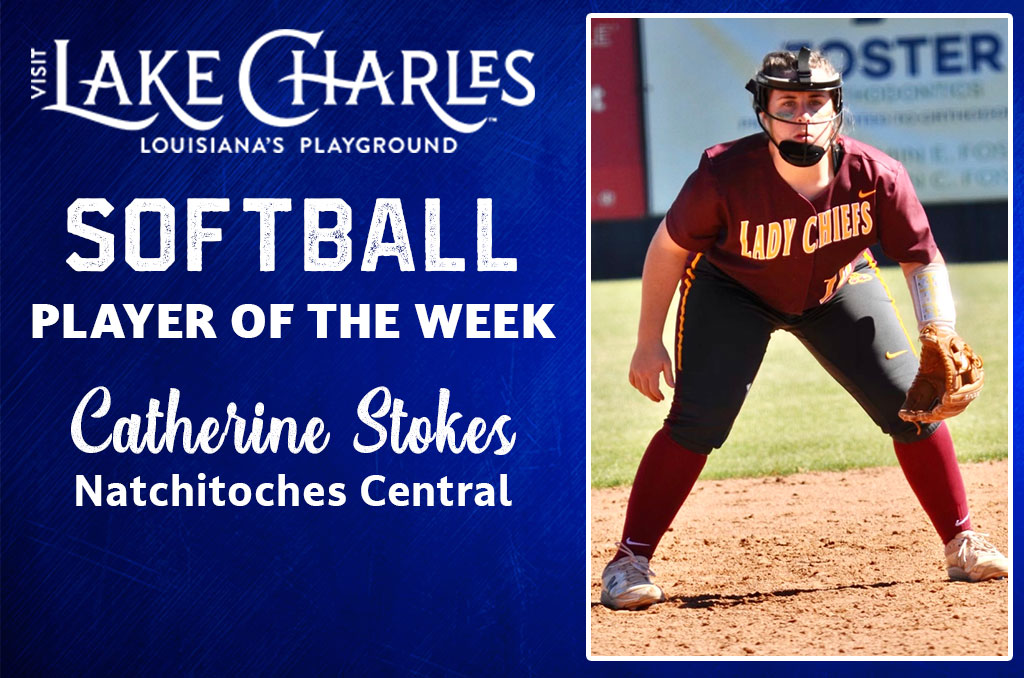 The weekly poll determined by the general public garnered over 11,600 votes. Stokes collected 6,603 votes while University’s Addison Harvey finished second with over 2,500 tallies.

Stokes, a Centenary College commit, led the Lady Chiefs to a 3-0 mark on the week with multi-hit efforts in each game. Stokes totaled seven hits, five of which were extra-base hits, driving in seven runs and scoring eight of her own. She finished with a .778 batting average and a .833 on-base percentage.

Addison Contorno helped lead the Lady Tigers to a 3-1 record on the week, turning in a .692 batting average (9-for-13) along with 12 runs batted in. Out of nine total hits, six of Contorno’s were extra-base efforts that included a grand slam, three home runs and two triples.

Shortsop Reese Grossie batted 9-for-14 last week and has helped lead Lafayette to a 6-1 start on the year. Grossie recorded two doubles, two triples and added a pair of home runs along with 15 RBI in victories over Centerville, Comeaux and Crowley.

In 3 games last week, the Cubs leadoff batter, Addison Harvey, totaled 12 plate appearances and reached base safely 11 times (.917 OBP). She was 7-for-8 at the plate (.875 AVG) including four singles, twp doubles, a triple, three walks, and one hit-by-pitch. She scored 10 runs with four RBIs for the Cubs. She ran wild on the base path with nine stolen bases (9-9) adding to her career total of 67 stolen bases. As a sophomore, Addison has never been caught stealing in 67 attempts.

Cailyn Heyl has played an integral part in helping lead the Lady Wildcats to their best start in school history. The junior pitcher worked 29 innings and surrendered only seven earned runs and 15 hits for a 2.17 ERA.

It is not often that a pitcher turns in a perfect game and a no-hitter within a matter of days. Alexis Normand accomplished both in back-to-back outings with 6 innings pitched and just one hit was given up. At the plate, she contributed three hits, including a double and three RBI. Her one-hitter came in a 16-1 victory over Ringgold on Monday while she tossed a perfect game in a three-inning 15-0 win over Dodson.

The Northshore pitcher had an outstanding week inside the circle as well as at the plate in convincing wins over Mandeville and Ponchatoula. The Memphis commit batted .857 with six hits, one of those a home run, and five RBIs. She struck out 25 batters allowing just two earned runs for a 1.00 ERA.