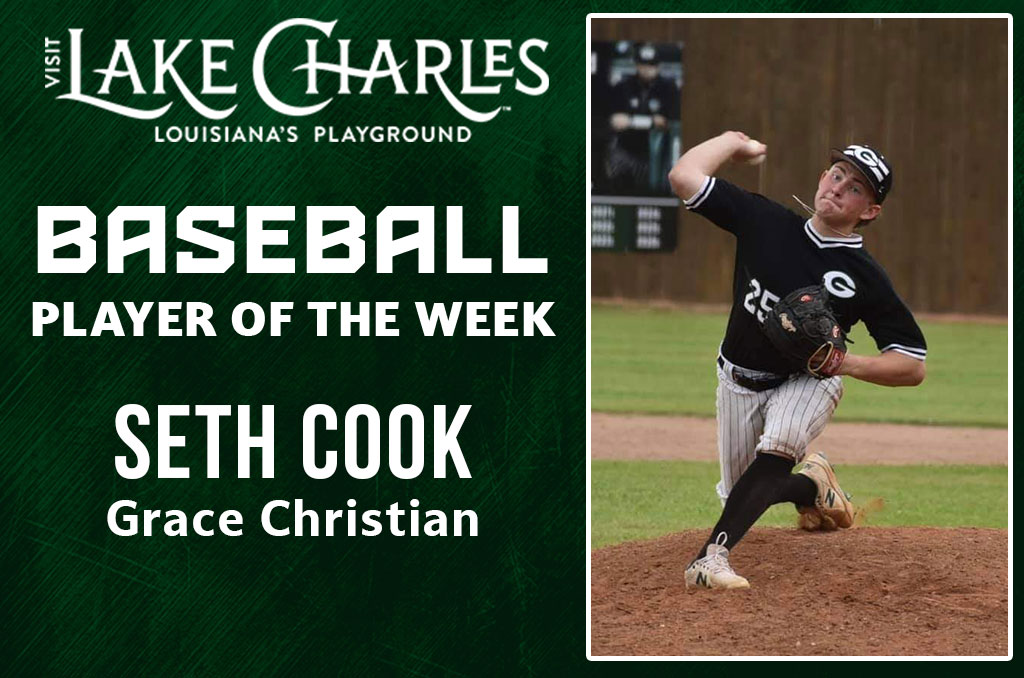 The weekly poll determined by the general public garnered over 7,100 votes with Cook collecting over 2,000. North DeSoto’s Landen Williams (1,886) and Holy Savior Menard’s Andrew Prejean (1,814) finished just behind cook in the voting.

Cook’s two outings to start the season were dominant as the sophomore turned in two complete games with 30 combined strikeouts, the most in two games in the history of the program. Cook also batted .600 (9-for-15) with 7 RBIs.

Jake Brown’s performance on the mound helped push Sulphur to a 4-1 mark to start the 2022 season. Brown worked 10.0 innings allowing no hits and struck out 21 batters in the process. He tossed a no-hitter against Calvary Baptist with 17 strikeouts. At the plate, Brown was 8-for-15 with a triple and five runs scored.

Dobson defined the term Utility during the opening week where he played four different positions including pitcher. At the plate, he was 8-for-17 where he hit a pair of doubles and drove in four runs in the process as well as stole a base. Overall, he led the Bears to wins over St. Paul, Parkview, Gulfport, MS and Ponchatoula.

Gavin Guidry helped take down cross-town rival St. Louis in a 1-0 effort after having tossed 5.0 innings allowing only two hits and a walk while striking out 10 batters. For the week, Guidry batted 8-for-17 with a double and drove in four RBI while stealing six bases.

Prejean went 2-0 on the mound in the opening week of the season highlighted by 11 innings of work where he allowed just one earned run to score on three hits. He struck out 17 batters in the process to help lead the Eagles to a 4-1 start overall.

Turner dominated his opponents in the first week where he struck out 27 batters in 12 innings while only giving up one hit. The Demond pitcher tossed a no-hitter against Albany and struck out 12 while also driving in a run on a double. Against Northlake Christian, he allowed just one hit and struck out 15 more.

Williams recorded a complete-game victory on the mound with nine strikeouts and just one earned run to help lead the Griffins to victories in their first week of play. At the plate, he was 6-for-8 with a double and two RBIs.