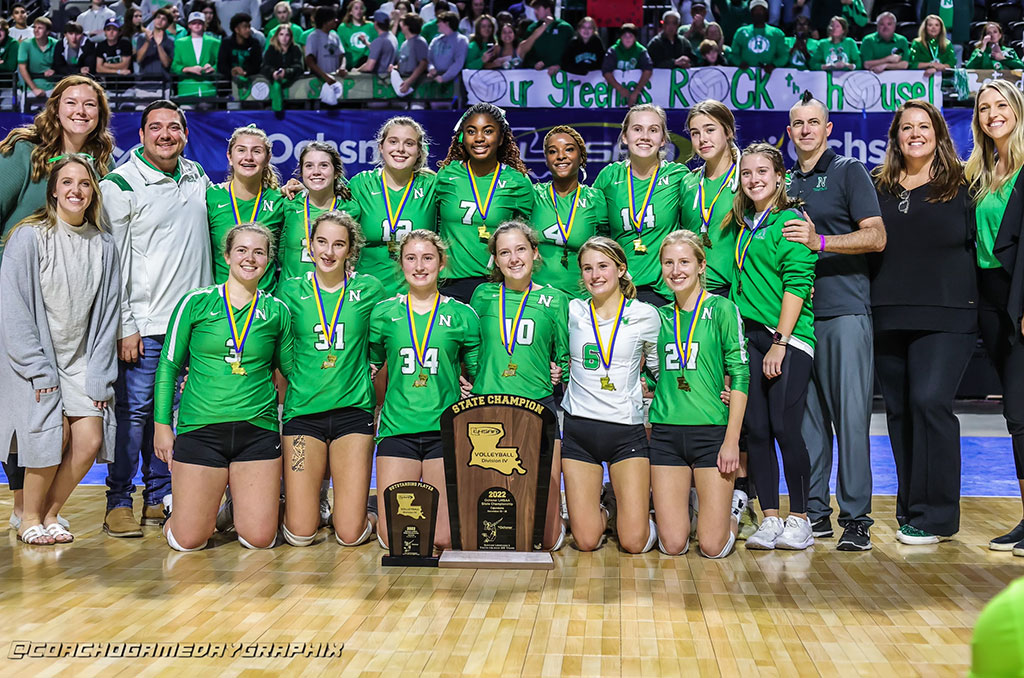 Zaria Nelson was named Most Outstanding Player for Newman. She finished the match with 18 kills and 17 digs.

While Saturday was a chance to take a state title, it was a more somber time off the court. According to Varsity Sports Now, Pope John Paul II Coach Danny Tullis’ son, Christian Tullis, was killed in a vehicular accident Friday evening in St. Tammany Parish.

Saturday, Pope John Paul II (27-8) returned to the finals this year after missing out in 2021.

Alli Tullis led Pope John Paul with 27 assists and added one ace, while Chloe Smith led the Jaguars with 14 digs.

—Neither team pulled away early, but Pope John Paul II took as much as a 14-9 lead on a Newman hit into the net.

—Newman rallied to tie the game at 18 on a kill by Beahm, but consecutive kills by Benedic gave Pope John Paul a 20-18 lead.

—The Greenies closed the match with a kill by Carolyn Rushing.

—Pope John Paul II took its lone lead of game two on a double hit by Newman for a 3-2 advantage. From there, Newman’s lead grew to as much as six on two occasions, taking a 10-4 lead on a kill by Nelson.

—A kill by Benedict and a Newman error helped Pope John Paul II cut the deficit to 13-12, but the Newman lead again grew to 19-12 on Beahm kill.

—A Newman double hit cut its deficit to 22-18, but Newman closed the set on a kill by Ella Faliveno.

—The teams traded the lead in the early onset with one of the game’s ties coming at 11 on a ball into the net by Pope John Paul II.

—Newman rallied and tied the score at 22 on a kill by Nelson and eventually took the match 27-25 on a kill by Faliveno.