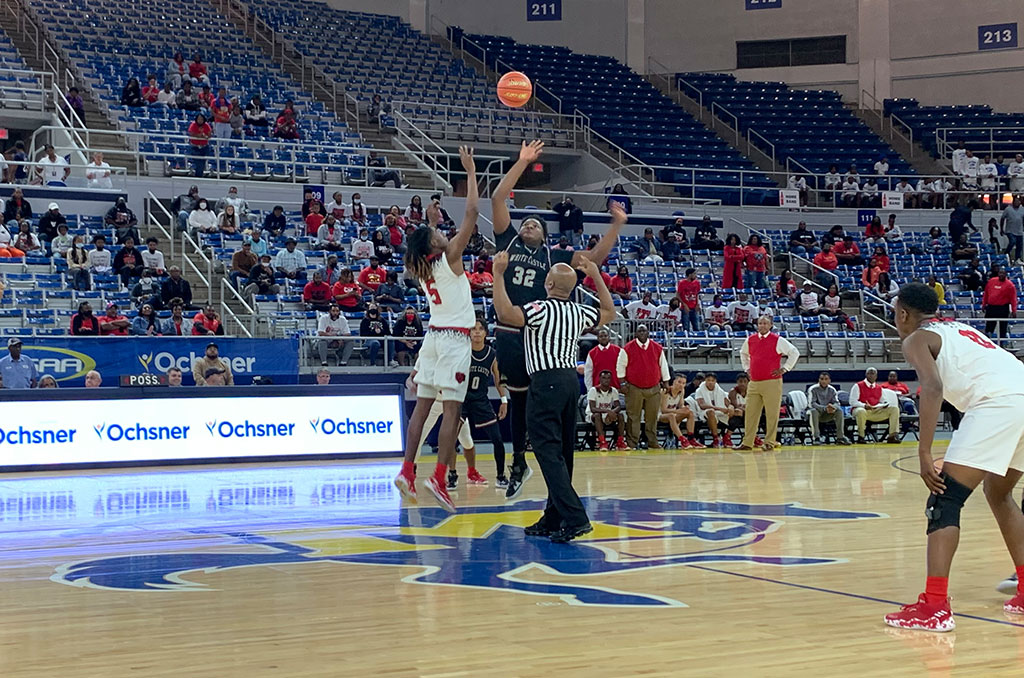 LAKE CHARLES– The 2022 LHSAA Boys Basketball Marsh Madness kicked off in dramatic fashion Monday afternoon as three teams punched their tickets to compete in the state championship games later in the week at Burton Coliseum.

For a second consecutive season, White Castle will be playing for a state championship.

The Bulldogs provided a 64-51 overtime upset over No. 2 Delhi to kick off the 2022 LHSAA Boys Marsh Madness. However, it wasn’t without its challenges including back-and-forth lead changes that would keep both squads on their heels.

Despite a seven point lead at halftime, White Castle was unable to withstand a momentum shift from Delhi, who outscored the lower seed, 18-9, in the third quarter to a two-point lead.

It seemed as though the momentum changed as White Castle forced the No. 2-ranked team in the state into overtime despite losing its best shooter to foul outs.

The Bulldogs had all the luck swinging their way as they celebrated an overtime victory after dominating the extra period in a 15-2 scoring advantage.

For Delhi, Eric Washington finished the game with a team-high 18 points and 14 rebounds while Dane and Tony Percy each scored double-digits.

For the third time in four years, North Central is headed back to the Class 1A state championship where the Hurricanes will take on White Castle on Friday.

Despite holding just a two-point lead over Lincoln Prep after the half, North Central continued its scoring attack that proved to be enough to keep the higher-seed at a comfortable lead.

Reginald Stoner and McKennis Savoie both combined for 46 of the Hurricanes’ 70 total points while Savoie hit 10 free-throws and hauled in seven boards.

Lincoln Prep received a 20-point effort from Brayln Mayfield who also had seven rebounds and two assists in the game.

The Simsboro basketball team continues its streak of playing in championship games as the Bulldogs downed Lacassine Monday night to earn a trip to its fifth straight final.

Despite a slow start, Simsboro was able to rally the troops and get some offensive momentum going in the first half to take a 35-30 lead, out-rebounding the Cardinals, 24-8, in the first two quarters.

However, Lacassine continued to fight and make runs but it was the overall athleticism of the Tigers that seemed to take over in the second half. Simsboro held its opposition to just seven points in the third quarter.