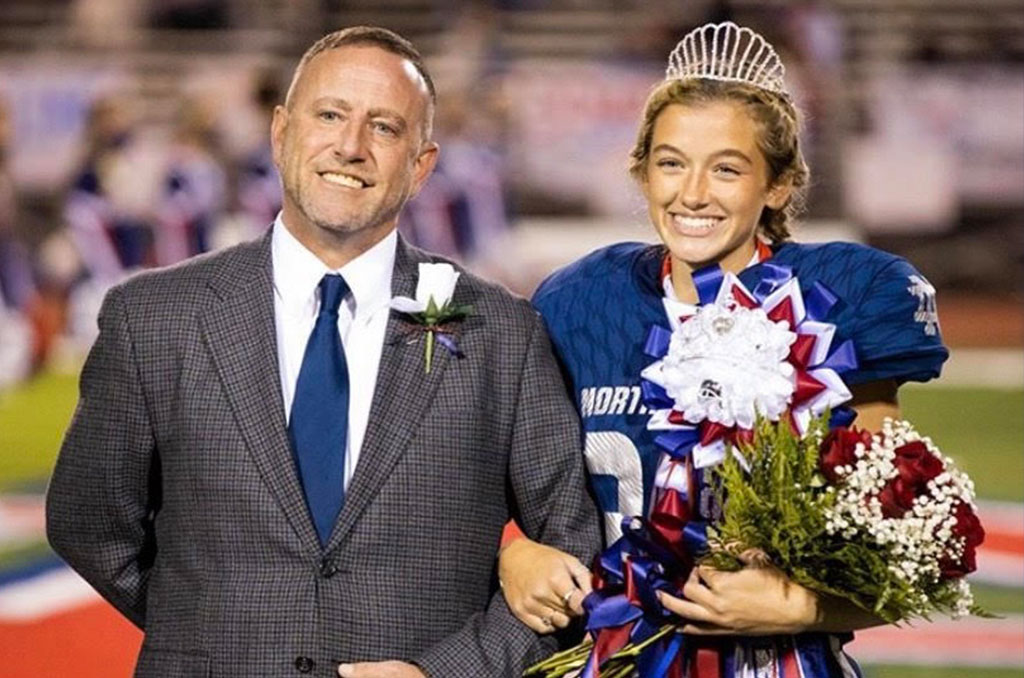 Kicking extra points in a Friday night football game while walking across the field as the school’s homecoming queen is something that most girls do not get to experience during their high school years.

For Aubrey Kuntz, a senior at North DeSoto High School, it was only another hurdle cleared on her way to proving that girls can do anything that boys can do.

Kuntz, a soccer player at heart and a co-captain on the North DeSoto soccer squad, was out on the game field back during the summer running a few drills. Unbeknownst to her, she had grabbed the attention of one of the assistant football coaches who originally approached her to let her know the field was closed. It was destiny for both Kuntz and the North DeSoto football team.

“I was running and practicing kicking goals for soccer one day,” said Kuntz. “Coach Cryer came over to tell me that I had to get off the field because renovations were not done yet for the new turf. Then he said I should try to be the kicker and I told him I would be at the next morning practice.”

True to her word, Kuntz showed up and showed out. Her skills, hard work and dedication landed her a spot on the Griffin varsity squad. Legendary football coach Dennis Dunn instantly saw that Aubrey had what it took to be part of the football team.

“Aubrey is a fierce competitor,” said Dunn. “She has worked extremely hard every day to improve and help our team. She has been embraced by the team and they protect her at all costs. We are so proud of her achievements.”

Fast forward a few months later and Aubrey would soon find out that she would get to experience something most kids never get a chance to.

“The football team was headed to Mississippi to play and one of my friends texted me to let me know that I had just been selected as North DeSoto’s Homecoming Queen,”said Kutnz. “My mom and I started screaming and high-fiving! We immediately told Coach Dunn what had just happened.

Dunn, one of the most prolific high school football coaches who owns 11 state football titles, added one more accomplishment to his resume that day.

This past Friday night, Kuntz was front and center as her family, friends, teammates and the state of Louisiana looked on as she took the field as both a football player and a Homecoming Queen.

It was an experience of a lifetime. However, Aubrey ran into a little adversity right before halftime.

“I missed my first two PAT’s and it almost got in my head right before halftime,” said Kuntz. “However, after walking across the field as Homecoming Queen and feeling the support from the crowd and getting pep talks from my coaches, my dad, my brother, Madelyn Garrett, and last year’s homecoming queen, Sarah Parks, I realized how much support I have and it felt insane.”

Just like she has done within the last few months, Kuntz leaped over another hurdle and raced past the doubts to take her place as one of the most special student-athletes to ever play for North DeSoto High School.

And if anyone was curious as to what Kuntz’s stats are so far this season, she has converted 11 of 15 PAT’s for the Griffins. Her tenacity and willingness to get better after each kick has earned the respect of her football teammates.

“Being on the football team has brought me a feeling of family that has made me more confident in myself and helped me to have a better attitude,” said Kuntz. “I’ve also had to adjust my passes and shots in soccer because of how much stronger my leg has gotten through football.”

Is she scared of getting tackled or injured during a play? Well, that’s where her soccer background kicks in on Friday night’s.

“I’ve been playing soccer since I was three years old so I’ve learned to be pretty tough and fearless when it comes to sports,” said Kuntz. People ask me if i’m afraid of being tackled and they obviously don’t know how hard a girl three times my size has hit me before without pads on. I’m not scared.”

Her fearlessness and determination to break through the so-called “gender barrier” has made her an instant local celebrity around the Stonewall area. However, it is for good reason.

“You can do absolutely anything you put your mind to regardless of what people say,” said Kuntz. “All that matters is the amount of work you are willing to put in. Don’t ever let anyone tell you that you can’t do something just because you are a girl.”

Aubrey is quick to credit others who have helped her along the way.

“My mom has always pushed me and told me I could do anything,” said Kuntz. “She told me I could do it from the beginning. I would also say my place holder, Sam Odom, because he tells me, “You’ve got this, Aubrey. Don’t worry about them.” before every kick.

She has even garnered a few fans along the way.

“My favorite memory, so far, is getting to meet my biggest fan, Zoey Crider,” Kuntz stated. Zoey is a third grader at North DeSoto Elementary. Zoey has told people that she wants to be just like Aubrey when she grows up.

Aubrey serves as an upstanding role-model who will continue to accomplish her goals and push forward to provide opportunities for those who otherwise would not be able to try the things that she has been able to do.

However, she still has a few more goals she would like to accomplish before the season is over.

“I want to do what Coach Odom always tells me to do and go have a good time with my team.” said Kuntz.

Aubrey is the role-model that little girls everywhere need. And one day, those little girls will be able to accomplish even bigger goals, because of Aubrey’s leadership.