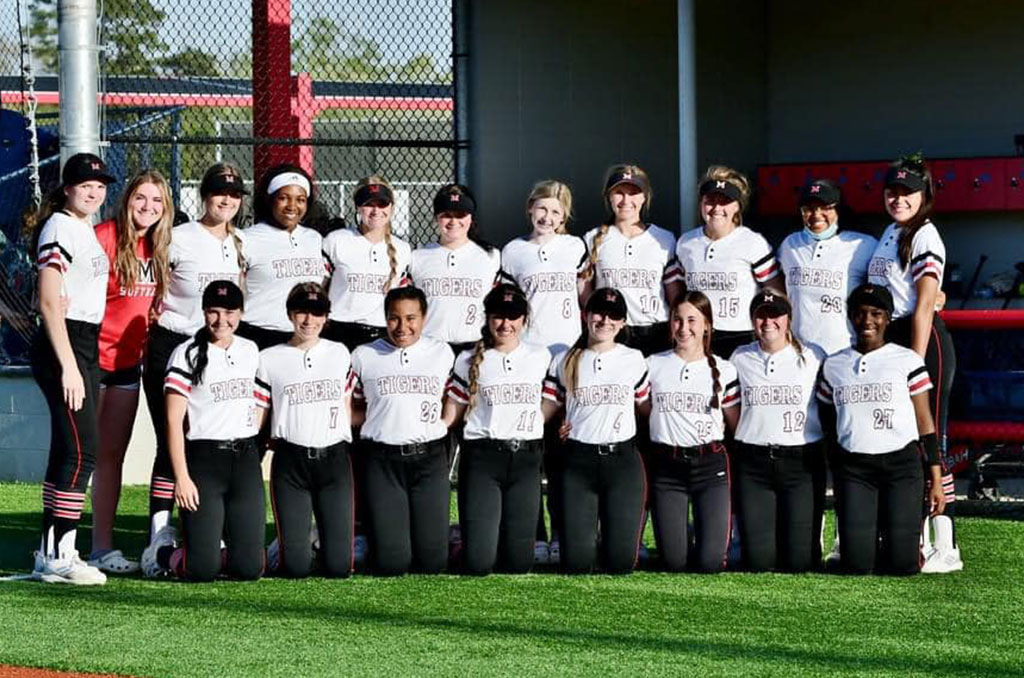 Many was a state semifinalist in the last playoffs (2019) and in 2017 when it was a 2 seed. It reached the quarterfinals in 2018 where it fell to Winnfield.

Benton 7, Airline 4 – The host Tigers clinched a tie for the District 1-5A title with the win. Airline pitcher Carter White took a 4-1 lead into the fifth inning before Benton rallied with three runs to tie the game 4-4 and added three more in the sixth. Carson Carey was 2-for-4 with 2 RBIs for the Vikings (4-8 District 1-5A, 8-20 overall). Benton (11-1, 24-4) got two hits from Grayson Gates, Rylan Lawrence and Dane Stearns. Gates, Stearns and Brock Van Hoy all drove in a pair of runs.

Benton 2, Airline 0 – At Airline, the Tigers prevailed in a 10-inning pitchers duel. Shutout through 9 2/3 innings, the Tigers broke through on three straight hits. Clint Lassiter doubled and score the first run of the game on a Dane Stearns single. Stearns then scored on a Grayson Gates double. Bryson Pierce started for Benton (23-4, 10-1), going 8 innings, giving up four hits, walked one and struck out 9. Grayson Mims pitched a perfect final two innings with two strikeouts to get the win.

Haughton 12, Byrd 7 – At Haughton, the Bucs took advantage of eight walks and 7 hits. Peyton Stovall hit his 13th home run and scored three runs. Chase Keith and Josh Sewell both had two hits, with Sewell’s bases loaded triple scoring three of Haughton’s five first inning runs. The sweep for Haughton moved it into second place in 1-5A at 9-3 and 25-5 overall.

Byrd was led by the two hits from Jack Walker and Jason Little. The Yellow Jackets are now 8-4 in district and 20-6 overall.

Haughton 5, Byrd 2 – The Bucs pulled into a tie for second place in District 1-5A with the win at home. Colin Rains’ 2-run home run in the fifth inning broke a 2-2 tie to give Haughton (24-3, 8-3) its first lead of the game. Jacob Hernandez and Austin Anderson combined to limit the Yellow Jackets to five hits, walked three and struck out three.

Byrd (20-5, 8-3) was led at the plate by Slade Netterville’s 2-for-2 effort. Sawyer Lacoste absorbed the loss despite allowing four hits, walked two and struck out 9.

Byrd 2, Natchitoches Central 1 – The Yellow Jackets scored a run in the top of the seventh as Evan Adcock got the complete-game win. Adcock was brilliant in allowing just two hits, walked none and struck out 14.

David Elliott was sharp on the mound for the Chiefs going 6 innings, allowing four hits, walked one and struck out three.

Benton 17, Captain Shreve 3 – The Tigers pounded out 18 hits led by three different players with three hits apiece. Grayson Gates was 3-for-5 with 4 RBIs, Brock Van Hoy 3-for-4 with a double and Cade Stewart 3-for-5, 2 RBIs. Rylan Lawrence, Van Hoy and Austin Berry all scored three times. Gates picked up the win on the mound with a 6 inning, complete game 3 hitter. He struck out 10 and walked 2.

Parkway 4, Airline 3, 8 innings – At Parkway, the Panthers scored a pair of runs in the bottom of the eighth after the Vikings scored in the top half. Starting pitchers for both teams – Carson Carey for Airline and Brandon Levy, Parkway – had identical pitching lines. The only difference for the two was Carey went 1 out into the seventh inning while Levy was done after working six innings. Both hurlers gave up 3 hits, 2 runs, 2 earned, walked 5, and struck out 8. Carey also homered in the game and had two walks in four plate appearances. Brady Norcross had a solo homer for Parkway and Trenton DeFatta a double and single in 4 at bats.

Bossier 14, Jonesboro-Hodge 0 – The Bearkats took advantage of nine walks in the 5-inning run-rule win. Cole Beeson was 3-for-4, with two doubles and drove in 5 runs. Andre Green added a homerun and Avery Williams got the win, allowing one hit, walked two and struck out 4.

Calvary 6, Evangel 2 – At Evangel, the Cavaliers got doubles from Aubrey Hermes and Blaine Rogers and a complete game on the mound from Jackson Legg. Fisher Nance was 2-for-3 with a pair of RBIs and Legg allowed 3 hits over 7 innings, striking out 6 and walking two.

The Choudrant Invitational featured a number of first place performances of area athletes. Doyline’s Jamari Markray captured four events taking the 110 and 300 meter hurdles on the track and the long jump and the high jump with a 6 foot, 8 inch leap. Matthew Jackson of Gibsland-Coleman took first in the shot put and discus.

In the girls division, Ke’honesty Williams of Gibsland-Coleman won the 200 meter dash. Castor had two athletes come away as double winners in Kenzie Crawford who won both the 1,600 and 3,200 meter runs and Jalexia Caldwell took the long jump and triple jump.  Haley Nailes took top honors in the pole vault and Emma Guice in the shot put.

Success was no stranger to Byrd head coach Rusty Johnson. On Wednesday he announced his retirement after 30 years of leading six different programs in Northwest Louisiana. Johnson ended his career with 842 wins and 256 losses. He started his journey in 1990 at Albany. The next three seasons he spent leading a Zwolle program to two Class B state championships and a Class 2A state title. From there he moved on to Haughton where he spent eight seasons and won four district championships and took the Bucs to the playoffs five times. In 2002 he took the job at Pleasant Hill and was the head mentor for six years. A three-year stint at Doyline preceded his 10 years at Byrd.