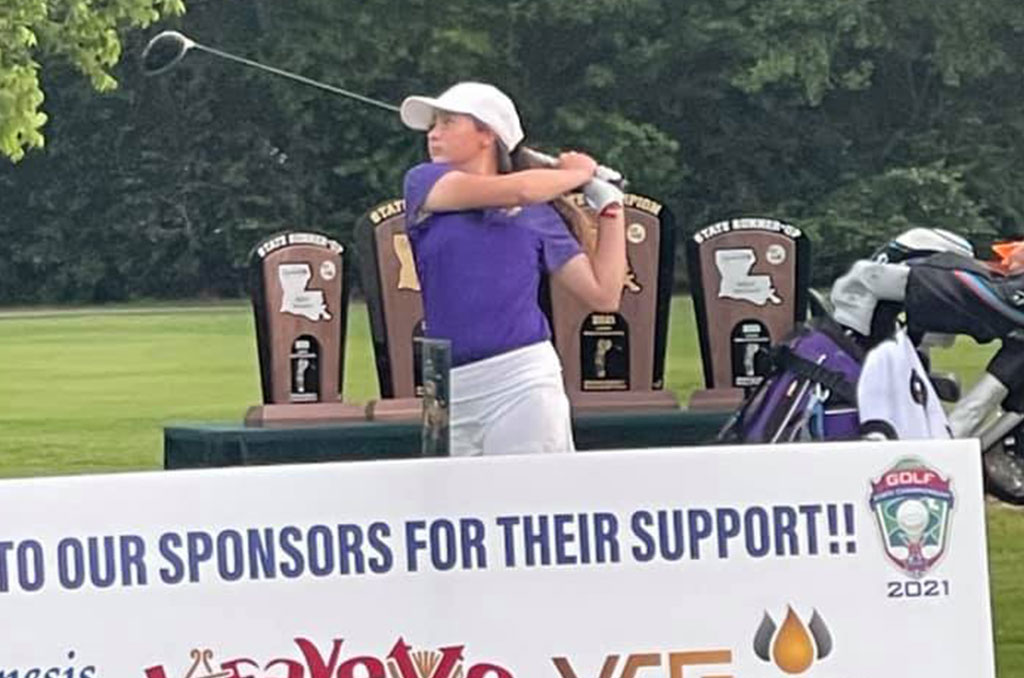 Byrd’s Sydney Moss birdied three of her final four holes to claim medalist honors at the Division I girls State Golf Championships. The junior shot the day’s low round by five shots, a two-under 72 to go with her first round 75 and finish the tournament one-under 147 and seven strokes ahead of second place.

Led by Noah McWilliams, Benton’s boys finished second to St. Paul’s in Division I. McWilliams finished in a tie for medalists honors after firing a pair of 70s but lost on the second hole of a sudden-death playoff to St. Paul’s Griffith Dorr who had rounds of 65-75. Eli Hill of Airline had rounds of 70-74 for 144 two-day total to finish 8th. Byrd’s Duke Bowen was four strokes behind Hill after shooting 72-76.

Loyola was a state runner-up in Division III. Holden Webb led the Flyers with scores of 72-71 to finish in a tie for fifth with a 143 total. August Drummond was four strokes back after rounds of 73-74. Burke Alford shot a pair of 75s for 150 total, Ross Alford turned in scores of 75-80.

Huntington freshman Demetria Harris helped lead the ladies to a state runner-up finish, two points ahead of BTW. Harris was a member the first place 400-meter relay team and second place 800-meter relay. The 400-meter relay team consisted of Harris, Kayla Taylor, Kyessence Johnson and Samantha Taylor and won with a time of 48.4. Joining Harris on the 800-relay team that ran a second-place time of 1:45.74 were Kalea Dean, Mekenzie Jackson, and Samantha Taylor. The freshman was third in her other two events, jumping 18-1 in the long jump and ran 14.84 in the 100-hurdles.  Taylor Bell, a Southeastern La. basketball signee, was second in the shot put (35-6 ¾) and Serenty Palmer was third in the high jump (5-1 ¾) and triple jump (35-8).

North DeSoto’s boys finished sixth in the team standings. Hurdler Cole Palmer had the only first place finish for the Griffins with a 14.59 time in the 110. His 39.47 in the 300 was good enough for second place. Palmer ran anchor on the 1,600-meter relay team that finished second in 3:27.3. Joining Palmer on the relay team were Jonathon Lewis, Kolton McMellon, and Logan Ferguson. Pole Vaulter Logan Ferguson vaulted 12-5 ½ for a third place finish.

Cameron Foster of Northwood placed first in the shot put with a 51-2 ¾ effort.

Captain Shreve’s Kendrick Law and Byrd’s Trent Wells highlighted boys from the area. Law was nosed out of a first place finish in the 100 meters running 10.48 behind Keonte Gaines of Alexandria time of 10.47. Law was on the Gator 400-meter relay team that finished second. Other members of the team that posted a 41.78 were Dillon Burgess, Maurice Green Jr., and Marquez Stevenson. Stevenson’s 48.57 in the 400-meters was good for third.

Girls top finishers included two from Benton and two from Parkway. Benton was led by Isabelle Russell’s second place finish in the 1,600-meters with a time of 5:17.43 and Jamie Willis clocked a 46.68 for third in the 300-meter hurdles.

No boys finished in the top 3 but Manfield’s Ly’TyKeunna Sicks was second in the girls 200 (25.21) and North Webster’s Peyten Ware was second in the pole vault with a personal best 11-4 ½. The Mansfield 800-relay team of Pamyah Johnson, T’La Dewitt, Precious Jones, and Sicks ran a second place time of 1:43.53.

Red River had a pair of third place finishes in the field events. Brian Palmer jumped 6-5 ½ in the high jump and triple jumper Zintavious Smith went 45-1.

The Logansport boys relay team of Keysavalyn Barnes, Khameron Boykins, Ja’Caleb Robinson, JyKevion Hewitt, won the 800-relay and ran second in the 400. Calvary’s Will Bagley finished third in the pole vault with an 11-5 ¼ jump and Plain Dealing’s Durancyk Newton was third in the discus (131-11).

St. Mary’s Maggie Gilmore finished second behind Mekyah Hooper of Merryville and ahead of Darcy Edgar of Ouachita Christian with all clearing 5 feet in the high jump.  Gilmore had a miss at 4-10 and Edgar had misses at 4-10 and 5-0.

Doyline’s Jamari Markray was a double winner in taking the 300-meter hurdles with a time of 43.02, and the high jump (6-3) and placed second in the long jump (21-9). Castor had a couple boys with second place finishes in field events. Landyn Crow r was second in the pole vault with a 9 feet, 11 ¼ inch effort and Gage Jordan’s 136-5 toss in the javelin was one inch behind first place. Castor’s girls had a trio of top performers in Jalexia Caldwell, Emma Guice, and Karelyn Urquidez. Caldwell’s 34-10 ½ jump in the triple was good enough for first and her 16-3 ¼ was second in the long jump. Urquidez vaulted 8 feet to finish second in the pole vault. Guice had a first in the discus (101-0) and second in the shot put (33-6 ¾).

The Yellow Jackets (25-7) defeated St. Augustine 12-5 and 9-7 to win the quarterfinal best-of-3 series. Slade Netterville had three hits, that included a triple and home run, and scored four times while Jack Walker also had three hits and scored three times in the 12-5 win. Mason Langdon was 2-for-4 with 3 RBIs and Connor Pierce was 2-for-3 with a pair of RBIs. Sawyer Lacoste struck out 9 in 5 innings to get the win.

Cole Joyner’s bases clearing double highlighted the Jackets 5-run sixth inning and put the Jackets ahead 7-5. Langdon followed with a 2-run homer and Byrd held on for the 9-7 win. Langdon finished 3-for-4 with 5 RBIs in the game. David Favrot and Jason Little both had a pair of hits.

Byrd will play Catholic-Baton Rouge Thursday in the state semifinals.

Calvary (26-7) took a pair of wins from Central Private in the quarterfinals to advance to the semifinals in Division IV. Jeremiah Brown’s walk-off single in the eighth inning won game 1. Aubrey Hermes led off the eighth with a single and stole second. One out later Brown laced a single to left field. Hermes’ hit was his second and Lance Mangum had a 3-run home run and 2-run double.

Toby Haulmark allowed just one run in 5 1/3 innings in the Cavs 5-2 clinching win on Saturday. Jackson Legg had a run-scoring double while Fisher Nance, Hermes and Blaine Rogers all drove in runs.

Calvary will face No. 7 Opelousas Catholic on Wednesday.