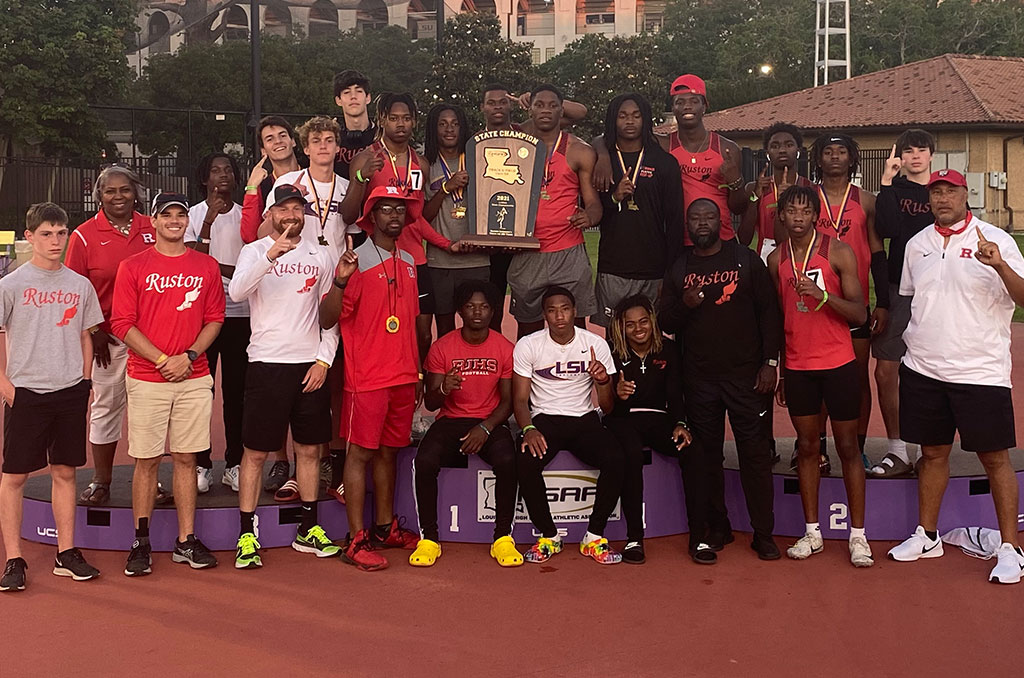 SATURDAY FINAL RESULTS (CLASSES 4A AND 5A)

Like two heavyweights in a title fight, Ruston and Zachary, both track and field powers in Class 5A, exchanged blows at the 2021 LHSAA State Track & Field Meet at Bernie Moore Stadium on Saturday.

When the smoke cleared, it was the Bearcats, who scored 82.5 points, avenging February’s loss to the Broncos at the State Indoor Meet just a few javelin throws from where the disappointment took place. Zachary finished with 67 points.

“I’m a man of faith,” Ruston head coach Allen Whitaker said. “God said “Hey, it’s not over yet. I’ve been believing that. I’ve been preaching that to my team. He said the story is not finished. I took that as motivation to come to this outdoor meet and perform.”

Saturday at Bernie Moore Stadium, the Bearcats avenged the loss winning the Class 5A State Championship.

In the early rounds of the fight, Zachary appeared ready to sweep their nemesis from the North.

Green made amends a couple of hours later in the triple jump, winning with a leap of 49-31/4. He also finished third in the 300 hurdles.

Zachary widened the gap in the boys high jump. Chris Hilton joined teammate Tate by becoming the second Bronco to win a state title in the jumps with a 6-71/2. Ruston’s Jamarion Reed finished sixth (6-3 ½) in the event, picking up one point.

One the track, Coach Whitaker’s Bearcats started to make up some ground. First, it was the 3200 meter relay where Ruston’s Dyllon Nimmers, Gatorade Cross Country Athlete of the Year, won with a composite record of 7:56.44.

Neither Ruston nor Zachary were able to get any points in the two hurdle events. However, those races were not without intrigue.

Again, it was Northeast Louisiana product in Ouachita’s Kashie Crockett pitted against a Baton Rouge area star in Woodlawn’s Lanard Harris. Crockett ran the No. 3 time in the nation, winning the 110 hurdles with a 13.76, which broke the Class 5A record. Harris’ 300 hurdle (36.91) ranks fourth nationally.

It served as a warm up for the performance of the meet, a 36.42 in the 300 hurdles which not only broke the composite record but is the fastest time in the nation.

In the team competition, Nimmers helped the Bearcats begin to separate themselves by winning the 800 meters (1:57.15).

“Dyllon said he was going to put the team on his back after indoor,” Whitaker said, “and he did. We knew going into the two mile we needed something big out of him and he performed today.”

Zachary didn’t quit, landing a blow in the 400 meters, where Hilton won his second state title of the day, but opportunities were missed.

Hilton slipped coming out the blocks in the 200 meters, a race he was favored to score well. Tate finished second, but Zachary head coach Chris Carrier was hoping for more.

Zachary also had two entrants in the 3200 meters, but neither were able to score and Ruston’s Nimmers placed third.

“15 rounds,” Whitaker said about the battle with Zachary. “Chris Carrier at Zachary is an outstanding guy. He said ‘iron sharpens iron.’ We battled with them today. It was like that for indoor. We wanted to return the favor.

Whitaker was most impressed with the Bearcat sprint groups, who—across the board—seemed to finish higher than their seed going in. I’m excited about what Coach Jackson has done with that group.”

After the meet, Whitaker shared a special moment with his mother. As he held the state championship trophy, his mother put her arm around his shoulder. Both grinned from ear to ear.

“My whole purpose this weekend was to make my momma proud,” Whitaker posted on Facebook about his early Mother’s Day present.

Zachary was the only team taking home two trophies, as the Lady Broncos came up short in their quest for a state title in the Girls’ division. St. Joseph Academy, under the direction of Charlie Daigle, captured.

“We knew coming in that we were a 20-point underdog,” Daigle said. “We told the girls all week ‘let’s just go in there do what we were capable of doing and see what happens.’ This is really the first time in 32 years were everything went exactly like we needed it to or a little bit better. We didn’t have any negatives. We did it quietly.”

In Girls’ Class 4A, it wasn’t hard for the media to find an MVP. Booker T. Washington’s Chyler Turner left Bernie Moore Stadium with more gold medals than anyone with state championships in all four individual events.