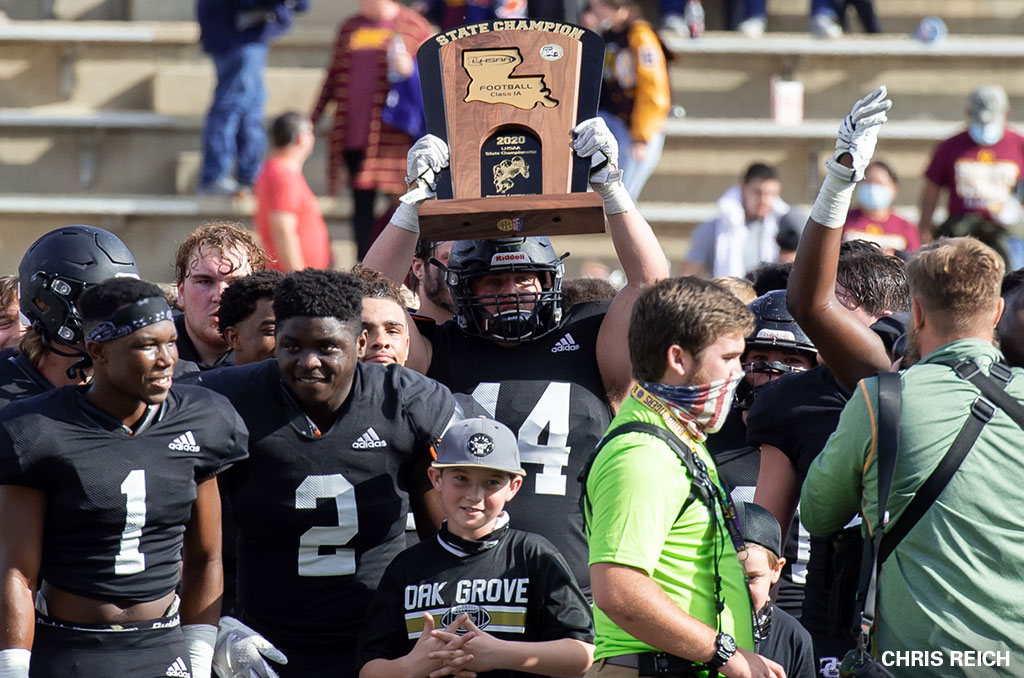 NATCHITOCHES – For the first time in program history, Oak Grove can call itself state champions for a second straight year.

The Tigers (11-0) capped off an undefeated season with a 33-7 victory over Grand Lake in the Class 1A State Championship game on Monday. The victory secured Oak Grove’s sixth overall state title.

Grand Lake overcame a ton of obstacles including two hurricanes that devastated the Southwest Louisiana region to earn the right to play in the state championship game. The Hornets finished their historic season with an 8-2 overall record in the first state title game in program history.

Oak Grove finished the game with 375 total yards with 366 of those on the ground. The Tigers were led by Ron Craten, voted as the team’s Most Outstanding Player, who accounted for 191 rushing yards along with two touchdowns. Quarterback Deuce Clement also recorded a passing and rushing touchdown in the contest.

Grand Lake was nothing short of impressive with its defense holding a team that averaged 60 points per game in the playoffs to only 33 in the game and only seven in the first half. Linebacker Cole Mott led the defense with eight tackles while Grant Trahan recorded seven.

The Hornets’ Most Outstanding Player, as voted on by the working media, was Eli Fountain who accounted for 87 all-purpose yards that included a passing touchdown.

• 05:26 – OAK GROVE | Ron Craten punched in a 1-yard touchdown rush that completed a seven-play, 64 yard drive for the first score in the game.

• 03:06 – GRAND LAKE | Kyler Little caught a beautiful 55-yard touchdown pass from halfback Eli Fountain to cut the lead to a 14-7 score late in the third quarter.

• 02:55 – OAK GROVE | Kelvin Holloway broke loose on the ensuing kickoff return and galloped 85 yards for the Tigers third touchdown on the day.

• 09:09 – OAK GROVE | Ron Craten scored his second touchdown on the day with a 5 yard touchdown rush to cap an eight-play, 85 yard drive.

“This was a gritty performance. I thought that Grand Lake played hard and proved what kind of team they were with all that they went through this year. I thought our kids came out in the second half and made some adjustments and played the way we have played all year.”

“I think it’s just building on what this program has done in the past and working to make it even better. That is what every coach wants to do is get better and never be content. It goes back to our guys. If you don’t have them buying in then it will be tough to succeed. ”

“We talked all year long about the legacy that we wanted to leave and then set a goal to go back-to-back and we were able to accomplish that. ”

“Obviously, the outcome is not what we wanted. However, I told the team in the locker room that trophies are made out of plastic and metal. Our community knows that plastic, metal and wood can be washed away in an instant. If a trophy is your goal in life, then you won’t become a true champion. What these kids did for us and for this community earned them the right to be called champions.”