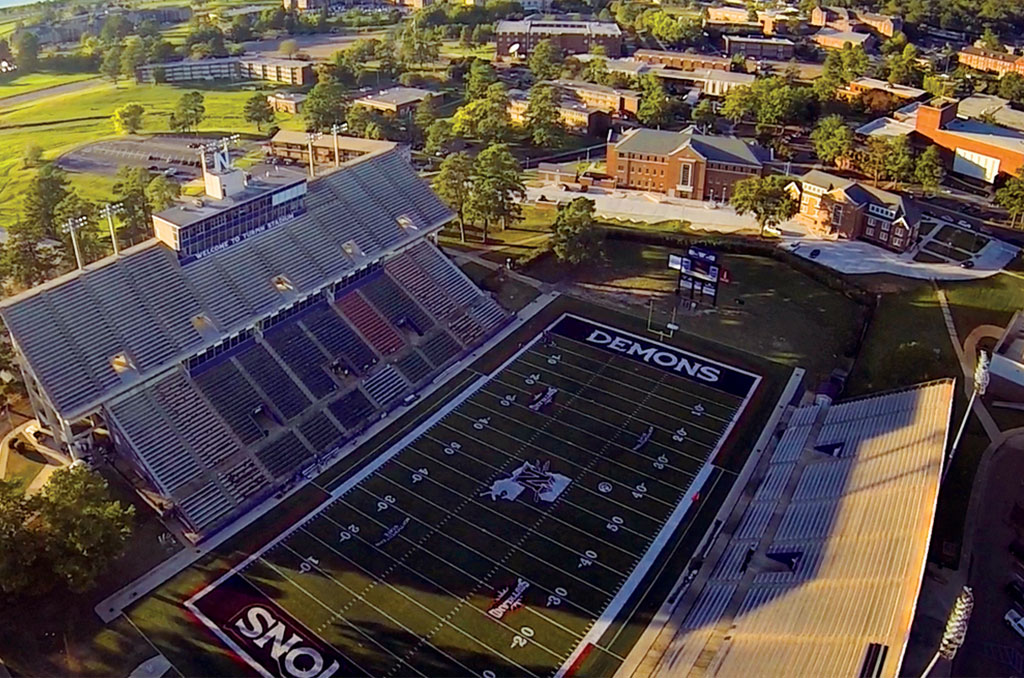 We have all heard of teams being classified as “America’s Team;” well, if there is ever a case for a team to be labeled as “Louisiana’s Team,” the Grand Lake Hornets deserve that honor.  The eye’s of both Hurricane Laura and Hurricane Delta crossed over Grand Lake High School and has left the Grand Lake community and surrounding areas devastated.  It is estimated that 12-14 players on the Grand Lake team have completely lost their homes.  The Hornets Head Coach Jeff Wainwright knew his community needed something to rally around; Coach Wainwright knew these boys needed a reason to get up in the morning, so amid Covid concerns and two hurricanes, Coach Wainwright, the administration, the superintendent, the staff, and the parents would not let high school football fall by the wayside.  Due to their persistence, the Grand Lake football team, which was resurrected in 2013, find themselves in the state championship for the first time in school history.  This is a story made for Hollywood with the ending yet to be written.  To be honest, as remarkable as this story is, the championship game is just lagniappe for the Grand Lake community.

This is your classic “David vs Goliath” matchup.   However, there is a matchup within the matchup to watch.  The Oak Grove offensive line is anchored by center, #74, Bo Stampley.  Stampley is 6-4, 305 and a junior.  Across from Stampley will be Bryant Williams, #64, 6-8, 325.  Williams who is also a junior, plays both sides of the ball for Grand Lake, nose guard on defense and left tackle on offense.  It is rare you will have an opportunity to watch a one-on-one battle between two monsters in the middle, but this battle could have a lot to do with who wins the war.

In the playoffs, Oak Grove’s offense is at full throttle averaging 60.3 ppg (points per game) while their defense is only giving up 10.2.  On the other side of the ball, Grand Lake’s offense is scoring 25.3 ppg in the playoffs while the defense is giving up less than a TD per game.  The concern for Grand Lake has to be the number of 2-way players the Hornets have compared to Oak Grove.  When looking at the interior lines, Oak Grove has zero players starting both ways; Grand Lake has three.

Grand Lake’s plan has to be long sustained drives on offense and eliminating the big plays on defense.  If the Hornets can do this, the Oak Grove offensive potential point production will drop drastically.  Grand Lake’s offense is capable of sustaining drives as Oak Grove has yet to face a team with this type of Veer attack.  My heart and my brain are going in two different directions.  Grand Lake is playing with confidence and confidence is a scary thing when applying it to teenagers and high school football.  The deeper into the game Grand Lake can feel confident, their chances of bringing home a state title increases.  My heart is with the Hornets, but my brain tells me that it is going to be difficult for Grand Lake to overcome the exhaustion in the 3rd and 4th quarters due to the number of players going both ways.  Oak Grove 35, Grand Lake 18.

Lafayette Christian is looking for their 4th straight state championship, two in Division IV and one in Division III.  The 2020 state championship game is a rematch of the 2019 championship game in which Lafayette Christian won 41-14.   This year’s game sees two of the better defenses in Class 2A squaring off, Lafayette Christian is giving up 7.6 ppg while St. Charles is giving up 9.7.  The biggest question coming into this year’s game is huge, is LSU commit Sage Ryan playing?  Ryan was hurt during the Knights playoff game versus Episcopal.  Ryan is a big impact for the Knights on both sides of the ball.  All indications are Ryan is expected to play.

For St. Charles, their offense is built for ball control.  If the Comets do not win the time of possession, their chances of winning this game drop drastically.   With that said, Lafayette Christian’s defensive line is 5-9; 215, 6-2; 310 and 6-2; 300.  To put and exclamation point on the Knight’s 3-4 defense, add two OLB’s Masey Lewis, 6-4; 240 and Sean Ned, 6-3; 230. Meanwhile, Lafayette Christian’s offensive line averages a mere 6-1; 254.  On both sides of the ball, Lafayette Christian is bigger and more physical than St Charles Catholic.

Lafayette Christian was shut out by Acadiana in the first game of the season 21-0; St. Charles was shut out in week 4 by De LaSalle by the same score.  Of all 18 teams in Natchitoches, De LaSalle is giving up the fewest points per game at 5.7 points per game, followed by Lafayette Christian at 7.6.  I believe St. Charles will be able to slow Lafayette Christian down, but not stop them.  On the flip side, LCA has given up only 21 points twice this season, once to Acadiana and once to Notre Dame.  I just don’t see St Charles’ offense scoring more than a touchdown.  LCA 24, St Charles 7.

This 2020 state championship is the 2nd rematch of the day.

De La Salle is playing under the radar. Because of STM’s success, most have already given the championship trophy to the Cougars. While STM has their fair share of DI recruits, Walker Howard and Jack Bech; De La Salle has offensive guard John Martin as well as running back Montrell Johnson.  The St Thomas More offense is averaging 46.4 ppg while their counterparts at De La Salle is averaging 38.1.  Defense’s are going to be the difference as STM’s defense is giving up 15.3 ppg while De La Salle is yielding just 5.7.  I have to believe, without checking, this is the best defense in the state, period.  See below for the tale of the tape.

I believe 2020 is De La Salle’s time.  I think De La Salle’s front four will be able to limit STM’s running game which will allow the secondary to give this talented STM offense different looks.  Look for the Cavaliers to win their first state championship.  De La Salle 24, STM 20