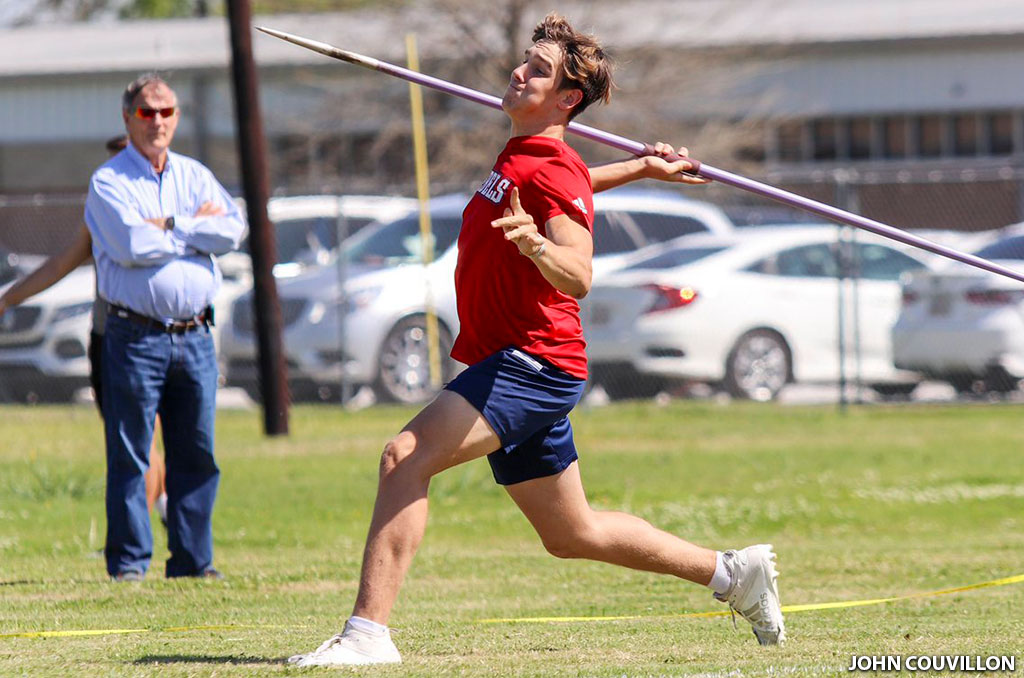 LAFAYETTE — Preston Welch has plenty of impressive throws throughout his youth sports career.

The sophomore was tabbed as the starting quarterback just last season at Teurlings Catholic where he helped guide the Rebels to six wins and an appearance in the Division II playoffs.

However, one of his most impactful throws came on a different type of grass field this spring.

“I was talking to one of my best friends, who is a javelin thrower, one day and I mentioned that since I was a quarterback I think I could be good at throwing,” remembers Welch who had no prior experience in the field event. “So I talked to the coach and agreed to let me try out and showed up for my first practice. After a few attempts, he told me that I had a chance to do something special.”

Fast forward to the Class 4A-Region 2 track meet on April 28, a little over a month after he had picked up a javelin for the first time, and there was Welch enjoying a breakthrough by throwing for a personal-best 165-5 meters and qualifying for this weekend’s Class 4A LHSAA Track & Field State Meet.

As stunning as it was for an undergraduate to qualify for the state meet not long after stepping onto the track surface for the first time, Teurlings head coach Brad Taylor was surprised by how quickly he caught on but not by his physical ability to adapt.

“How fast he was able to progress is what was surprising,” said Taylor. “The javelin throw is so technical that to progress much further than that a lot of things have to come together.”

Indeed, the hard work in such a short amount of time paid off as Welch made his throwing debut at the Northside High track meet on March 25 where he finished sixth with a 120-4 mark. One week later, he broke his personal record with a throw of 139-0 at the Doug Stewart Relays.

“I went into that first meet with the goal of just trying to prove myself because I wasn’t sure if I was going to keep doing it,” said Welch. “But, I wasn’t nervous because I simply saw it as a competition between me and my friend.”

As his throws progressed, he continued to work on his technique and eventually it became enough to help him qualify for Regionals with a 140-10 throw at the District 5-4A meet.

“With the javelin, it’s more of a pull than it is a throw which is the biggest difference,” said Taylor. “However, a lot of the mechanics such as body posture translates so that is what has been the good thing about having Preston is that you can give him a single verbal cue and he picks up on it because of the reps that he’s had as a quarterback.”

The simple approach to such a complicated event played a huge part in helping Welch prepare for the big moments even though he had every right to be just as nervous as a professional thrower preparing for the first Olympic event of their career.

“In starting at quarterback as a sophomore this past season, I went through a lot of pressured moments,” said Welch. “I think that helped train me to keep a calm, cool and collective composure when competing in big moments such as Saturday’s meet.”

From rookie to now one of the top throwers competing the Class 4A Javelin event at LSU this Saturday, Welch continues to just go out and have fun with his friends. Still, for the underclassman, the moment of reflection following his record-setting effort at Regionals and realizing that he will be competing for a state title still seems to catch his mind every now and then.

“It was a surreal moment just to think how I came out to participate and see how I would do to now having to go throw my best now at state,” said Welch. “I really want to win this thing and my coach told me that it’s all about timing and that I shouldn’t be aiming for a certain measure but rather focus on my technique.”

Should his timing be on point with a throwing technique that has improved with each event he has participated in, Welch has the chance to come home from Baton Rouge with a medal and a memory that he will forever cherish.