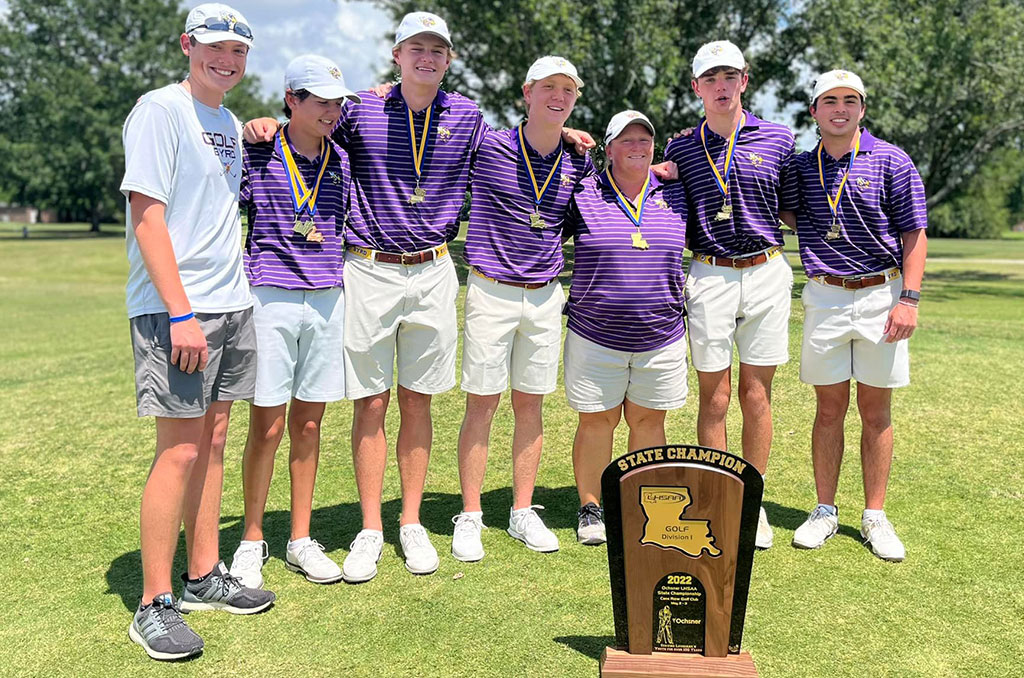 by Dan McDonald // Special to the LHSAA

NEW IBERIA – C. E. Byrd had its four counting players all shoot 75 or better, using that balance to claim its fifth Division I boys title in the last seven years Tuesday at the Ochsner Health LHSAA State Golf Championship.

Byrd posted a team 296 total after leading Catholic-Baton Rouge by one stroke entering Tuesday’s final round over the 6,291-yard par-72 Cane Row Golf Club course. That gave Byrd a two-day 587 score and a five-stroke win over Catholic High at 592, while defending champion St. Paul’s finished third, three more strokes back at 595.

St. Paul’s did provide the individual winner, with Joshua Achord posting a stellar five-under-par 67 score in Tuesday’s final round to finish at five-under 139. Achord, who finished third and one stroke back of teammate Griffith Dorr and Noah McWIlliams of Benton in last year’s individual chase, finished two strokes ahead of runner-up Walter Anderson of Catholic-Baton Rouge, who had a Tuesday 70 and finished at three-under-par 141.

First-day leader James Holtsclaw of Byrd, who had a five-under 67 on Monday, finished third and was the only other player under par with a two-round 142 total. McWilliams, who lost in the playoff for the individual title last year, was fourth at even-par 144 and Reeves Pullin of Ruston, competing as an individual was fifth at 145 after a 69 on Tuesday.

Benton finished fourth at 616 and Jesuit fifth at 618 in the team race.

CARENCRO – Hometown favorite St. Thomas More, which entered Tuesday’s final round with an 11- stroke lead, held on in the final round to claim the Division II boys title at the Ochsner Health LHSAA State Golf Championships.

The Cougars posted a team 309 score on Tuesday over the 6,536-yard, par-72 Farm d’Allie layout after a 315 score on Monday. The 624 team total was good enough to give STM its second team crown in the past three years. Defending champion St. Louis Catholic had the day’s best score at 302 and finished four strokes back with a 628 team score after posting Tuesday’s best round at 302.

St. Louis was led by Ross Anderson, who had the day’s best round with a four-under 68. That was 10 strokes better than his opening 78 and was good enough to bring him from four strokes back and win the individual crown with a 78-68—146 total.

Dax Reaux of Teurlings Catholic finished with a one-under 71 and a 150 two-round total to take second-place honors and help the tournament host Teurlings squad finish third at 645 after a second-place finish last season.

J. D. Trettin of Neville, the first-round leader by two shots after an opening 74, carded a 77 in Tuesday’s final round and finished tied for third at 151 with Caddo Magnet’s Alexander Walker, competing as an individual. James Stonecipher was STM’s individual leader and finished in solo fifth place at 153, while teammates Jude Bourque finished seventh (155), Thomas Oubre finished ninth (156) and Zach Hardy finished 13th (161).

Holy Cross finished fourth at 656 and Neville finished fifth at 658 in the team race.

A sudden-death playoff determined this year’s individual champion with Episcopal’s Boyd Owens edging Ascension Episcopal’s Jay Mendell on the first playoff hole with a par. Both finished with a 139 total to send them into the playoff match-up.

Three of the top five individual finishers came from Ascension Episcopal with Mendell leading the pack while Kale Fontenot (143) and Bruce Sutterfield (145) following close behind.

CARENCRO – Ouachita Christian made it look easy in defending its Division IV boys team title, and the Eagles’ Caden Lester made it a sweep with the individual crown Tuesday at the Ochsner Health LHSAA State Golf Championships.

OCS posted a 309 team score, the low round on Tuesday by 42 strokes, to finish with a 641 team total for two rounds over the 6,536-yard par-72 Farm d’Allie Golf Club course. That was good for a 57-stroke margin over runner-up Quitman (698), after the Eagles led by only 15 strokes entering Tuesday’s final round.

Lester, last year’s individual Division IV winner by a narrow one-stroke margin, finished with a four-stroke win on Tuesday after the tournament’s low round, a two-under-par 70 in the final round. His 76-70—146 total put him ahead of runner-up Logan Heltz of Christ Episcopal, who added a 74 on Tuesday to stand at 150, and third-place finisher Cole Haase of Riverside Academy, who had an 80 Monday but improved with a 73 in the final round.

Adam Trahan of Episcopal-Acadiana finished fourth at 154 and Max Jones of Lafayette Christian was fifth at 158 after an even-par 72 on Tuesday, the day’s second-lowest round.

Behind Ouachita Christian and Quitman in the team chase were Ascension Catholic in third at 708, Episcopal-Acadiana in fourth at 714 and Cedar Creek in fifth at 723.