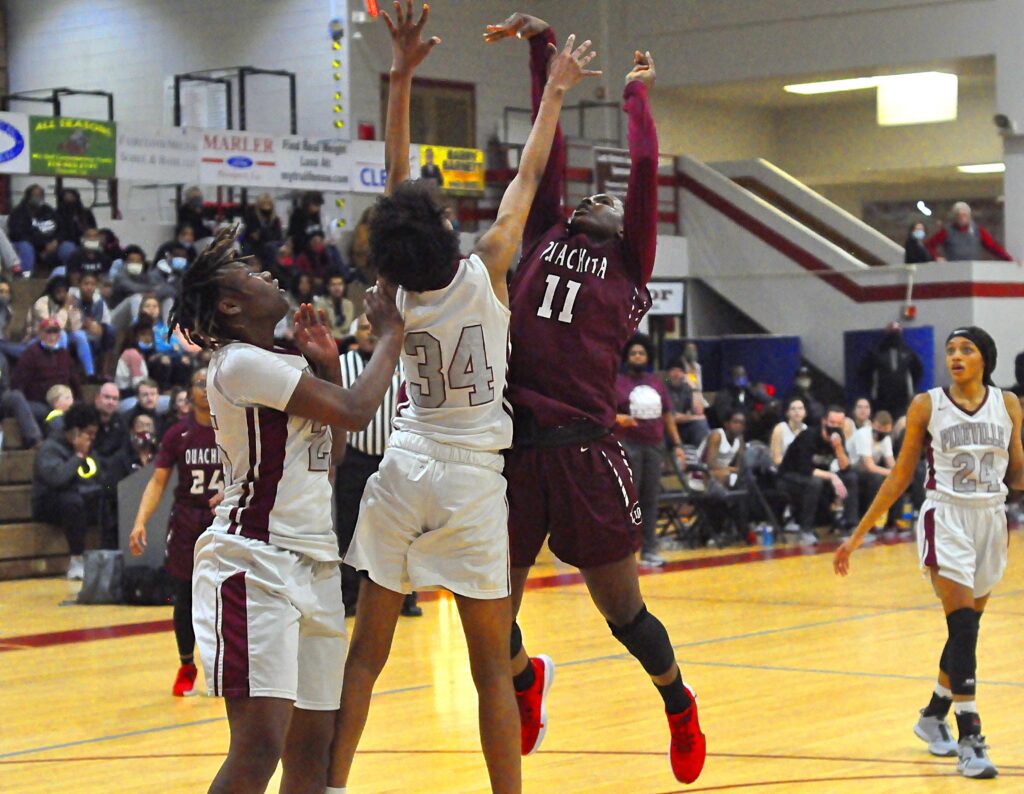 PINEVILLE – The Ouachita Parish Lady Lions have not missed the playoffs since 2005 and started the first round off with a district rival in Pineville High and came out with a win 62-53 on the road.

Having only lost four times in over a decade the Lady Rebels had something to prove and so did first-year head coach Tashilla Wenslow.

This was not only a district rivalry but a sibling matchup vs her sister Chrissy Givens, a former Ouachita Parish star.

Givens was excited for this opportunity to be in the playoffs.

“I feel good, it’s that time of the year that you play all season to play, the playoffs. I feel like the girls have also understood the importance of this game and I feel we are ready to play.”

She also had some words about battling her sister in the postseason.

“It’s truly historic. The fact that we pulled each other and it was meant to be for us to be in this moment. I think it will be, no matter who wins this game the other is always going to be supporting.”

Givens’ three keys to victory are for her squad to play like a team, never stop playing and play with their hearts and have fun.

The first half was a tough one for the Lady Rebels as it was a tight back and forth effort, especially in the first quarter.

Going shot for shot throughout the first 3 minutes and after 4:30 remaining the Lady, Lions took a lead ending in a 13-19 first quarter.

11 fouls in the first half hurt them early as well as multiple turnovers and finding difficulties on defense.

The Lady Lions held off a late first-half comeback and ended up leading 26-21. Faith Lee led the team in scoring with 8 points and Zinerria McCarthy with 6 at the half.

Givens had some encouraging words for her team during this short break.

“Keep your head. We know who we are, we can’t control anything but us. So just remember to control ourselves, listen and do our game plan and stay with what we practice. Stay focused and stay where we are.”

These Lions roared back hard in the second half and built on their first-half success in the third quarter.  After 4 minutes of action, Ouachita took a double-digit lead and went on a short run and ended the third up by 11.

At the end of it all, they halted the Lady Rebels comeback to come out with a tough road win and while also fouling out a few Lady Rebel starters. The score was a 9 point difference but it was definitely a fight to the end.

“I’m not satisfied we’ve still got more to go. Still not satisfied”, says Givens on her first playoff victory.

Faith Lee finished with 20 points and Zinerria McCarthy finished with 18 points. Even though coach Givens was not satisfied she praised Lee for her performance.

“She’s finally performing to what I’ve always thought she could perform like. I don’t know why she saves it but this is what I had the vision for when I found out she was a Lady Lion.”

The Lady Lions will play host to the No. 1 seeded Ponchatoula Green Wave on Tuesday at 6 PM.