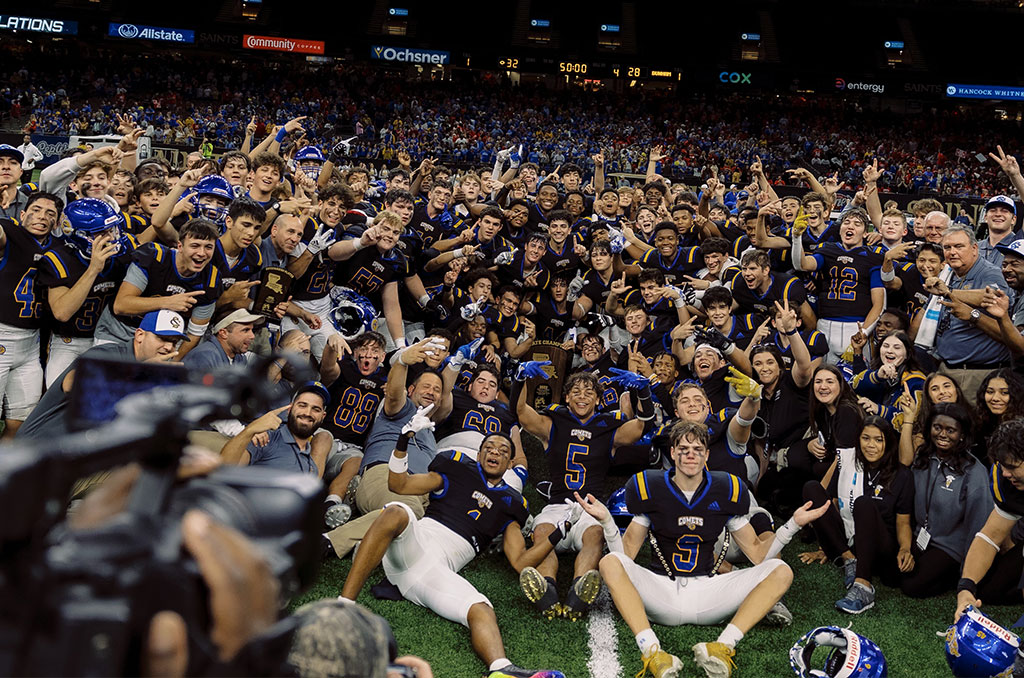 The Comets shut out Dunham in the fourth quarter to claim the 32-28 victory in the Division III select state championship, the program’s second straight title against an opponent with more highly regarded college talent.

“We found a way,” St. Charles coach Wayne Stein said. “We’ve always been a team that talked about winning is a skill, and it’s a skill that our kids possess. And they found a way to get it done in the end.”

The Tigers edged the Comets in both rushing and passing yards in a game with no turnovers and 11 combined penalties.

But St. Charles managed to make just enough critical plays during the fourth quarter to turn the tide and

“The best team doesn’t always win, but the team that plays best,” Dunham coach Neil Weiner said. “Tonight, credit St. Charles and their coaching staff and their kids, they seemed to find a way to make one more play each time they needed it. And they get a lot of credit for that, because if they can do that against these guys, they must be pretty good.”

Senior quarterback Ayden Authement found juniors Jackson Monica and Brandon Kragle early in the fourth quarter for a touchdown and two-point conversation, respectively, to pull back within 28-25.

And Stein called on senior Michael Hotard for an onside kick the Comets recovered to seemingly take charge of the game before even taking a lead.

“You worry about — all week we talked about there’s instant replay, you can’t block anybody, you have to turn around and box ‘em out, that ball has to go 10 yards, you can’t touch it,” Stein said. “And our kids just couldn’t have executed it any better. And at that point I felt like we had a little momentum, and we needed to try to keep it.”

Authement led a 10-play, 45-yard drive over the next nearly five minutes, including a seemingly gravity-defying spin-and-lunge through contact to convert a fourth down at the 19-yard line and the 3-yard go-ahead score four plays later.

“It was unbelievable,” Stein said. “Almost like, what’s that movie, ‘The Matrix’? They’re too young to remember that, but I remember that. He gets hit and somehow twists and stays up, but he just possesses some championship character and characteristics.”

Stein credited predecessor Frank Monica for helping lay the foundation of that culture, but praised the players, their families and the community for their instrumental role.

“What’s special about our place is not coaches, it’s kids,” he said. “We have a culture where our parents let us push our kids, and we do and the kids don’t balk at it. We have a coaching staff and a group of kids that’s selfless. We’ve never cared how we won. We’ve never been somebody, unfortunately for some of these guys, that’s gonna light up the statistics, because we just care about winning. The only statistic that we care about is that ‘W.’”