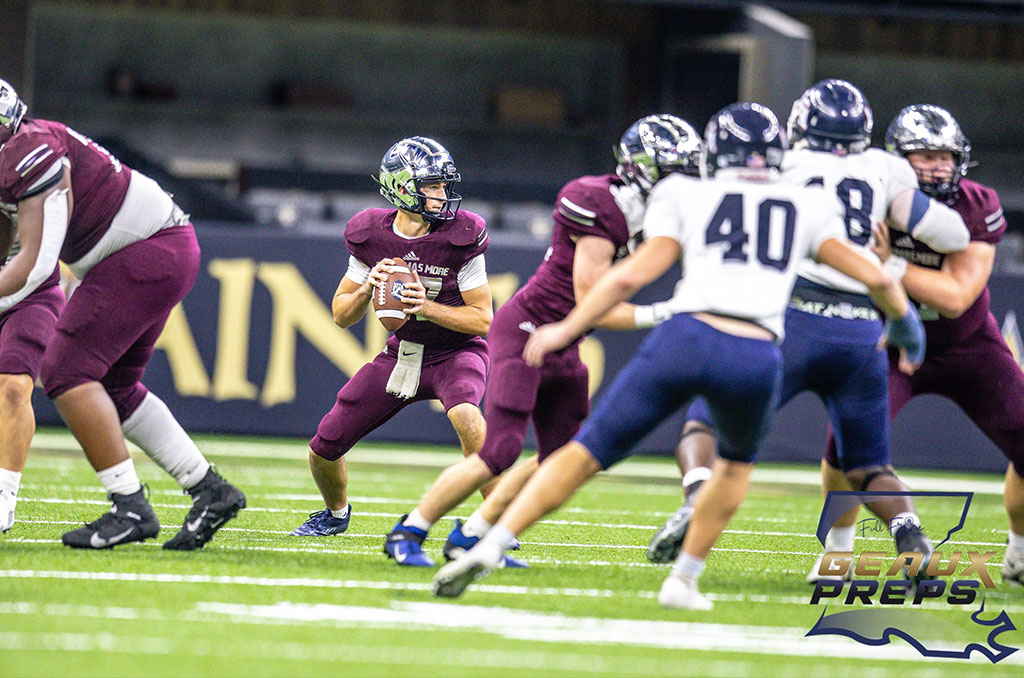 Sam Altmann’s teammates could see the stress of a particularly chaotic — and ultimately 100-point — shootout of a state championship game in the Caesars Superdome mounting on the young quarterback.

So senior wide receiver Christian McNees leaned in with some wisdom in the third quarter.

And, with St. Thomas More trailing by three points in the final minute, running back Hutch Swilley helped his fellow junior ease the tension with a joke.

“He tells me, ‘That breakfast we ate this morning, that’s why we’re here right now,’” Altmann said, referencing the hashbrowns, eggs, pancakes and sausage at the Swilleys’ house before driving to New Orleans. “And I was laughing.”

Altmann connected with senior Connor Stelly the next play on a 54-yard go-ahead strike somehow rifled between two defenders.

“I’ve been involved in over 500, I know, and that was a wild game for sure,” legendary coach Jim Hightower said.

Altmann rebounded from his ups and downs earlier in the game to thread a pair of not only his own, but the entire eight-game weekend’s throws when his team needed them to keep hope alive and then take control for a third championship in four years.

The 6-foot-3, 185-pound passer finished 22-for-39 for 422 yards and a record-tying six touchdowns to earn Outstanding Player honors.

“It shouldn’t go to me,” he said humbly. “It should go to Christian or the O-line, they did a great job the whole game.”

But the performance was undeniably significant for a quarterback following the high-profile footsteps of former St. Thomas More star Walker Howard, now in his first year at LSU, and having won a battle for that opportunity just months ago.

“Walker Howard, when you lose somebody like that, you really don’t think our team or our quarterback will be anything like him,” McNees said. “But Sam, dude, we had a quarterback battle this year, he stayed composed. And he’s the hardest worker I’ve ever seen in my life. Like, he just kept working, even through tonight. The throws he made tonight and all season, you just can’t ask for anything more from him.”