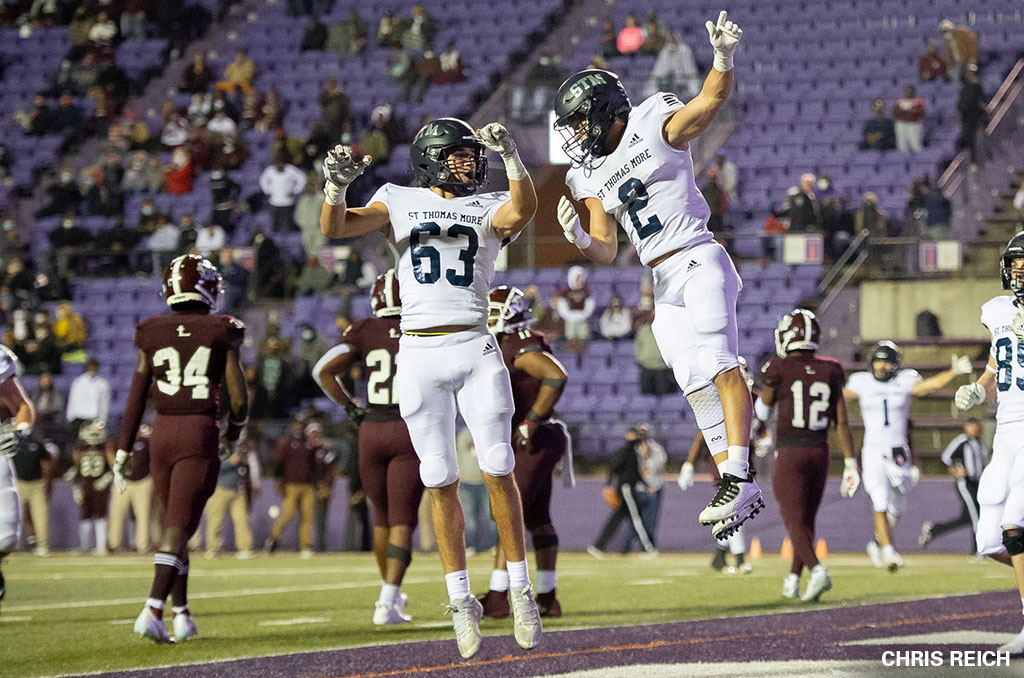 NATCHITOCHES – St. Thomas More did exactly what it set out to do and that was to repeat as champions in Division II.

The Cougars (10-0) captured their third state championship in six years and repeated as champions for the first time in school history. STM also completed its goal of going undefeated despite not knowing whether there would be a season due to the ongoing COVID-19 pandemic.

STM finished the game with 423 yards of offense that was led by the duo of quarterback Walker Howard and wide receiver Jack Bech. Voted by the working media as the Cougars’ Most Outstanding Player, Bech set the Division II/Class 3A LHSAA Prep Classic record for receiving yards in a game with 232 on 10 catches along with two touchdowns. The senior was just one yard short of tying the Overall Composite record.

Howard put together an outstanding passing performance where he threw for 381 yards on 18 completions and four touchdowns.

De La Salle finished the season with a 9-1 record and was led by tailback Montrell Johnson’s rushing performance of 182 yards and four touchdowns. Johnson was voted the Cavaliers’ Most Outstanding Player for his game-changing performance.

Defensively, STM was led by Bryce Boullion’s 13 tackles in the game while De La Salle’s Shamar Keelen totaled eight tackles and one interception.

• 11:37 – ST. THOMAS MORE | Jack Bech didn’t take long to open up the scoring for the Cougars when he caught a 29-yard touchdown pass from Walker Howard to go up early in the game.

• 06:15 – DE LA SALLE | Montrell Johnson zigged and zagged his way into the endzone on a 28-yard touchdown run to knot the score up for the Cavaliers.

• 01:36 – DE LA SALLE | Montrell Johnson scored his second touchdown of the game on an eight-yard scamper to cut into STM’s lead just before halftime.

• 11:50 – DE LA SALLE | The Cavaliers tied the ballgame up at 21 all as Montrell Johnson recorded his third touchdown of the game when he punched in from two yards out.

• 11:20 – ST. THOMAS MORE | Walker Howard connected with Jack Bech for the second time in this game with a 38-yard touchdown pass that gave the Cougars the lead again. Extra point was blocked by De La Salle’s DeAnte Lebranch

“That was a hell of a ball game and my hat’s off to De La Salle. They were a bunch of warriors in that game tonight. Alot of respect for what they did and how they gameplanned. They put us to the test.”

“I am super proud of these guys. What a season it was. This season started in June and we were getting ready to go into January. However, they stayed focused throughout. All of the hurdles and changes in routine that was thrown at us, we answered the call. Our guys believed in what we were doing. They really enjoyed playing with each other. ”

St. Thomas More’s WR Jack Bech on how great it was to win a second straight title

“Everything just meant a lot more this season with the whole COVID-19 situation. Everything that we had to overcome to get where we are meant alot. We did it. The passion, blood, sweat and tears. We grinded every day and nobody took their eyes off of the trophy.”

“I am so proud of the guys in our locker room. We did something that nobody really does against St. Thomas More. We had a chance to go out and win the ball game there at the end. I have an emotional locker room that prepared really hard for this season and had to adapt the whole year.”