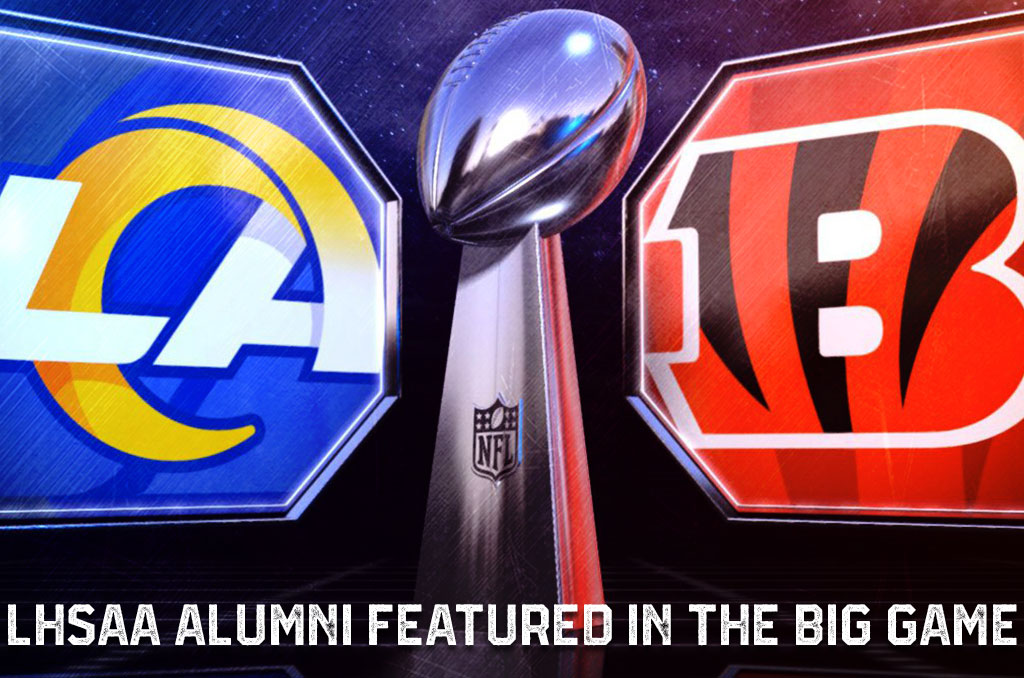 It’s finally here! Super Bowl LVI is set to kick off Sunday afternoon with the Los Angeles Rams taking on the Cincinnati Bengals.

A number of LHSAA alumni who made significant impacts during their prep careers will proudly represent the Pelican State in Sunday’s game. Six players from Louisiana will represent both the Rams and Bengals. That number is tied with Maryland for sixth-most behind Texas (16), California, (13), Florida (12), Georgia (9) and Ohio (7).

Perhaps two of the biggest names in today’s game both hail from Louisiana as Ja’Marr Chase and Odell Beckham, Jr. each make their Super Bowl debuts.

Beckham, in his first season with Los Angeles, played an integral part in helping lead the Rams back to the Super Bowl with 19 receptions for 236 yards in three games. He caught nine passes for 113 yards in the NFC Championship Game while also scoring his first playoff touchdown in the Wild Card Game against Arizona.

The New Orleans product prepped at Newman High School where he accrued 1,1010 receiving yards and 19 touchdowns as a senior. He reached All-American status during his collegiate days at LSU before being drafted as the 12th overall pick by the New York Giants in the 2014 NFL Draft.

A record-setting wideout at LSU, Chase was drafted fifth overall by Cincinnati in the 2021 NFL Draft along, reuniting the speedster with Joe Burrow, where together, the duo has helped changed the Bengals organization back into a winning culture.

In his rookie season, Chase broke several NFL records highlighted by his 266-yard receiving performance against the Kansas City Chiefs in Week 17, the most in a game by a rookie. For his efforts on the gridiron, Chase was named to the Pro Bowl team, the theAll-Pro team and was selected as the Pro Football Writers of America NFL Offensive Rooke of the Year.

Before his days as a playmaker at the professional and collegiate levels, Chase prepped at Archbishop Rummel where he caught 115 career passes for 2,152 yards and 30 touchdowns. A multi-sport athlete, Chase won the Louisiana 5A state title in the long jump as a junior.

North Louisiana will be represented in Sunday’s game as veteran Andrew Whitworth gets set to play in his first Super Bowl. The West Monroe native is in his 16th season, 11 of which came in Cincinnati, having been selected to the Pro Bowl four times and has been named first-team All-Pro in 2015 and 2017.

Whitworth’s tenacity and longevity in the sport has been admired by many. The former LSU Tiger is the oldest active player in the NFL and is the first player in NFL history to start a game at Left Tackle at the age of 40.

The Monroe native starred under legendary head coach Don Shows at West Monroe and helped lead the Rebels to state titles in 1998 and 2000. At LSU, he was apart of the 2003 National Championship football team under Nick Saban.

Taylor was a standout at Evangel where he earned all-state honors and was a part of two of the Eagles state championship teams. A multi-sport athlete for the Shreveport area school, Taylor went on to spend four seasons at Louisiana Tech where he set school records for receptions and receiving yards in 2016.

Shelvin attended Notre Dame and helped his squad to a 13-1 campaign during his senior season. He was the higheset-rated recruit out of Louisiana where he went on to spend three seasons at LSU, playing in 21 games and totaling 48 tackles, and one sack. Selected in the 2021 NFL Draft, Shelvin has four tackles in his rookie season with the Bengals.

Morgan, a prdouct of St. Augustine, his in his third year with the Bengals where he has two receptions in 2021. In high school, he totaled 46 catches for 891 yards and eight touchdowns as a senior before heading up to Nebraska. With the Cornhuskers, he played in 49 career games and set school records for career receptions and receiving yards. After signing with the Bengals as a free-agent in 2019, Morgan has played in 34 career games, including all 17 in 2021.