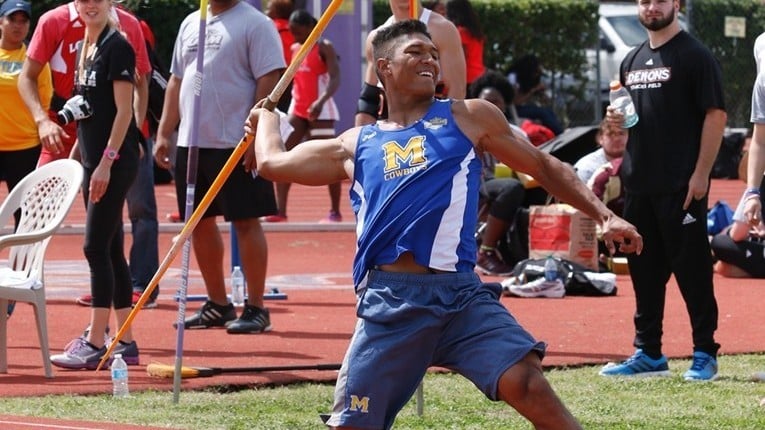 When the pandemic shut down the sports world in mid-March last year, there were many college seniors across the country who found themselves in a dilemma. Should they move on with their lives and begin their careers, or take advantage of the NCAA’s offer of another year of eligibility?

For former Captain Shreve standout Donovan Banks, who will represent McNeese State at the NCAA Championships tomorrow in Eugene, Or., the decision was a no-brainer.

“It was a very easy decision for me,” Banks told KPLC Sports last March. “I’ve dedicated a lot of my life to this sport and seeing how far I can throw. I really want to see what I can do.”

To say that Banks has made the most of the extra year, would be an understatement.

On March 12th, almost a year to the day when everything was put on hold due to covid, Banks broke the McNeese record in the javelin with a throw of 246-11.75.

Banks, who checks another item off his javelin bucket list tomorrow at 6:15pm, is not alone at the championship meet in Eugene as freshman teammate Hunter Longino from Oakdale, La. also qualified for the Cowboys.

Banks, who qualified with a throw of 235-5, is seeded No. 9 in the field of 24 throwers. Longino is seeded No. 17. Mississippi State’s Sindri Gudmundson is the top seed with a qualifying mark of just under 262 feet.

“Having a coach who has competed in this meet makes a world of difference,” Banks said Tuesday morning. “We watch him and the way he carries himself. He did what we are doing now and came out successful. We wouldn’t be here in Eugene if it weren’t for him.”

Chretien’s message to Banks was simple.

“Donovan just has to go out there and empty the tank,” Chretien told KPLC earlier this week. “Just do what he did to get there and remember all the years of blood, sweat, and tears he’s put into this sport. Relax and let it happen.”

When Banks reflects on his time at McNeese, which memory will pop up first? Will it be the highs of winning a Southland Conference championship in 2018, after coming in second twice? Or, will it be disappointment and heartache of a 2019 season cut shot by season-ending Tommy John surgery? It may be August 27th, 2020 when Hurricane Laura made landfall in Southwest Louisiana as a Category 4 leaving the town–and track and field complex at McNeese State–in shambles.

While Banks learned many things from his coaches and professors, it was the people of Lake Charles, who came together after Hurricane Laura, which provided Banks with the biggest lesson about the human spirit and overcoming adversity.

“I learned to be grateful for what I have,” Banks said. “I learned that you really can overcome anything. Lake Charles was like a war zone. The people came together to rebuild an entire city. It was awesome for me to be able to witness that and be a part of helping people put their lives back together.”

Banks was asked what he will remember the most about his time as a Cowboy.

Banks didn’t arrive in Lake Charles with the kind of determination and tenacity it takes to qualify for an NCAA Championship meet. While the raw athletic ability was there, it took a conversation in the hospital with McNeese State head coach Brendon Gilroy to flip the switch.

“We were in the hospital waiting to see the doctor about my injury,” Banks said about the conversation which took place in April of 2018. “I was asking Coach Gilroy about the greatest track and field athletes he had ever been around.”

Then Banks asked Gilroy where he was on the coach’s list.

“He said I was a good athlete and a good competitor, but I didn’t take the sport seriously enough,” Banks said. “After that, I made a decision that I wanted my name to be in the conversation when he talks about the greatest. Nothing else mattered.”

Seemingly, Banks has done it all.

“The end goal is to represent the US and to go as far as I can,” Banks said. “I want to be the best javelin thrower in the country.”