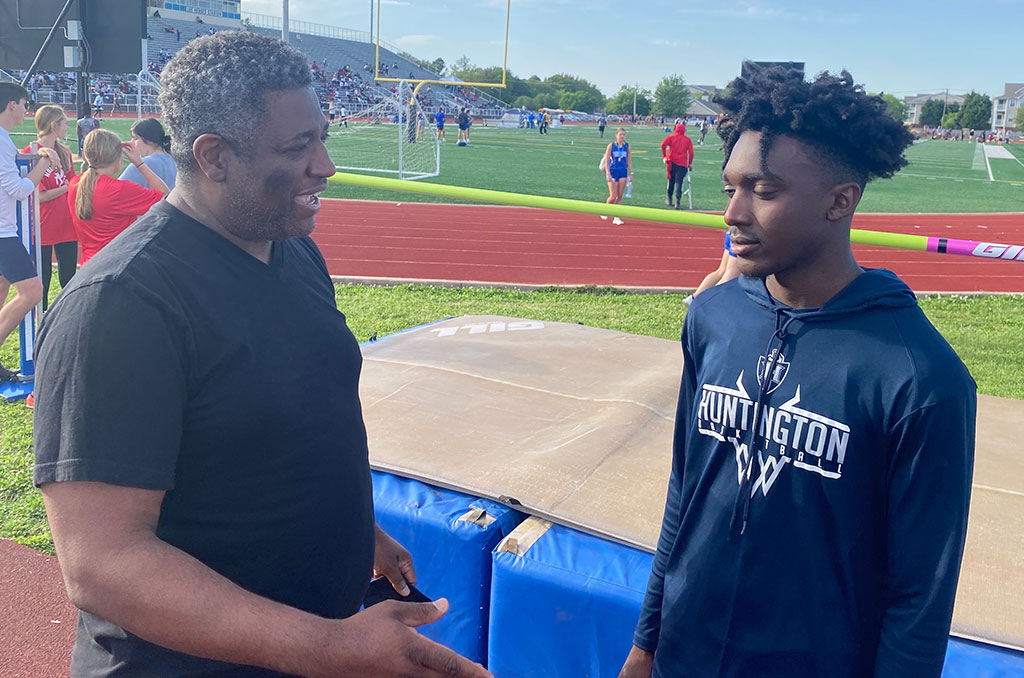 SHREVEPORT – When Huntington teacher Kesha McClendon took Raider sophomore Oshamar Hall to see the head track coach before Spring Break, nobody could have anticipated what would transpire over the next four weeks. Hall, who had never even heard of the jump a few months ago, won his third consecutive gold medal on Thursday at the Huntington Relays with a leap of 6-4.

After securing the victory, Hall had the official move the bar from 6-4 to 6-10, the Huntington school record held by Caddo Parish Sheriff Don Gibbs, who set the record in 1984. On his first attempt, his upper body cleared the bar by three inches before his legs knocked it off.

Ironically, it was Gibbs who planted the seed during basketball season when Hall was frustrated over the lack of playing time.

Gibbs, who is a good friend of Huntington basketball coach Mack Jones, attends most games and some Raider basketball practices.

“After every shot, you see his head go flying by the rim,” Gibbs said. “And he was doing it off of one foot. I pulled him aside and told him he needed to try the high jump. He said ‘What’s that?’ so I pulled it up on my phone and showed him.”

Hall has shocked the Northwest Louisiana track and field community. His basketball coach? Not so much.

“I’m not surprised,” Jones said. “He doesn’t even realize how well he is doing. I sent him a text and told him ‘good job.’ He replied back and said ‘for what?.’

There is no sophomore in America who has jumped higher outdoors in 2021. Jace Posey of Houston’s Strake Jesuit and Riyon Rankin of Brunswick, GA have tied Hall’s best at 6-8.

Overall in Louisiana, only Zachary senior Chris Hilton, who has a best of 7-0, has jumped higher.

Nobody on Raspberry Lane is happier than head track coach LeRonn Burris, who is giddy when talking about the newest member of his team.

“Right now, he is a sponge,” Burris said. “He has a great attitude. He comes to practice every day and works hard.”

In Hall’s first meet he jumped 6’6. At last week’s Southwood/Woodlawn Relays he cleared 6-8.

Hall’s success is drawing a crowd to high jump apron at Lee Hedges Stadium, but on campus, Hall said the word of his success has not gotten out.

As Hall continues to work at the event with Burris and Gibbs, Raiders can expect to see college recruiters coming onto campus to vie for Hall’s services after graduation. Until then, the sky is the limit for Oshamar Hall.