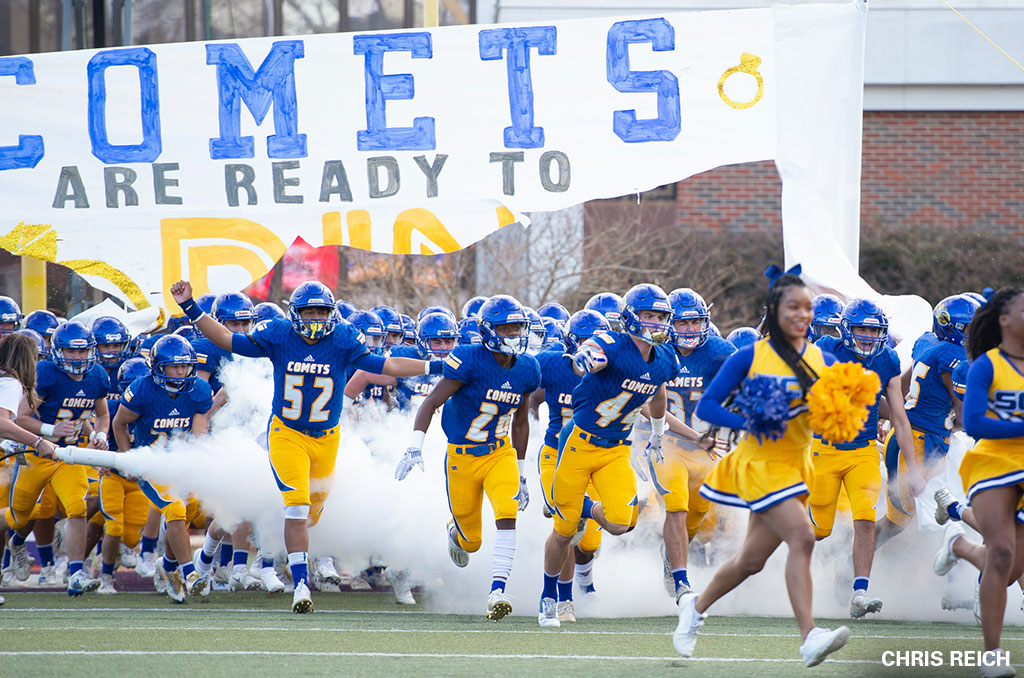 The Comets (11-0) scored their second state title in program history Saturday afternoon with a 32-27 victory over Lafayette Christian in the Division III title game. The victory is St. Charles’ first in its last two attempts at defeating the Knights who won previous matchups in 2019 and 2020. The defeat also ended Lafayette Christian’s attempt to become just the second school in Louisiana high school football to win five straight state titles.

In winning its first title since 2011, the Comets capped a remarkable season that was marred by Hurricane Ida which slammed into the South Central region of Louisiana forcing schools such as St. Charles to postpone its first few scheduled contests due to the devastation left behind.

However, the Comets persevered and dominated their opposition along the way and that focus did not change in Saturday’s contest. St. Charles forced six LCA turnovers in the game and scored points off of two of those.

Lafayette Christian dropped to 10-2 on the year after being denied a fifth-straight title. However, the Knights will have a chance to advance to their six straight state title game when they make the move up to Class 4A next season.

Ju’Juan Johnson was voted the Most Outstanding Player for Lafayette Christian following a great performance on the offensive side of the ball. The sophomore quarterback  totaled 175 all-purpose yards including 93 passing yards that led to three touchdowns.

• 04:15 – ST. CHARLES | Following an LCA turnover, Authemant broke in on a one yard rush to up the Comets lead. Vicnair punched in a two-point conversion to give the Comets a 11-0 advantage.

• 02:24 – ST. CHARLES | Chauvin converted another field goal to put St. Charles ahead by two scores over LCA. The field goal was good from 22 yards.

• 10:15 – LAFAYETTE CHRISTIAN | B. Zeigler gave the Knights a much needed boost on a scoop-and-score for 46 yards to pull within one score of St. Charles’ lead.

• 07:38 – LAFAYETTE CHRISTIAN | Ju’Juan Johnson connected with Darian Riggs on a 12-yard pass while the PAT knotted the score up at 14 points midway through the second quarter.

• 04:08 – ST. CHARLES | The Comets regained the lead following a blocked punt landing outside the endzone and resulting in a safety. St. Charles went into the locker room at half leading 16-12.

• 09:21 – ST. CHARLES | The Comets used some razzle-dazzle as as reverse pass by Devin Brown found Authement for a 22-yard touchdown that extended St. Charles’ lead to a 23-14 score.

• 04:48 – ST. CHARLES | Another LCA turnover led to more points scored by the Comets as Carter Chauvin converted his third field goal of the game for a St. Charles 26-14 lead.

• 01:13 – LAFAYETTE CHRISTIAN | The Knights capped a nine play, 70-yard drive with a three-yard touchdown from Johnson to Devin Leday to cut the Comet lead to a 26-20 score to close out the third quarter.

• 09:20 – LAFAYETTE CHRISTIAN | LCA took its first lead of the game early in the final period when Johnson found Helaire on a 21-yard touchdown pass along with a made PAT to make it 27-20.

• 02:26 – ST. CHARLES | As the Knights tried to close out the game, a mishandled snap flew deep into the Knights’ territory and a failed attempt at recovering allowed St. Charles to fall on the fumbled ball in the endzone and score the touchdown. The two-point attempt failed but the score gave the Comets the 32-27 lead and the eventual victory.

“This is a resilient group of kids that we have. They have been through alot this year and they just fight for each other. It’s not about coaches or individualism. We don’t have any five-star athletes. I am just so proud of them. We were running out of gas near the end but our kids found a way to get it done.”

Stein on adversity throughout the season following Hurricane Ida

“This championship means everything. I am just living a dream. I told the kids before the game that I hope they get a chance to live their dream. This was my dream to come back and coach them as an alum of this school and as the head coach. I can’t say enough about my coaching staff. I did less coaching this year than I ever had in my career and that was because my staff was just unbelievable.”