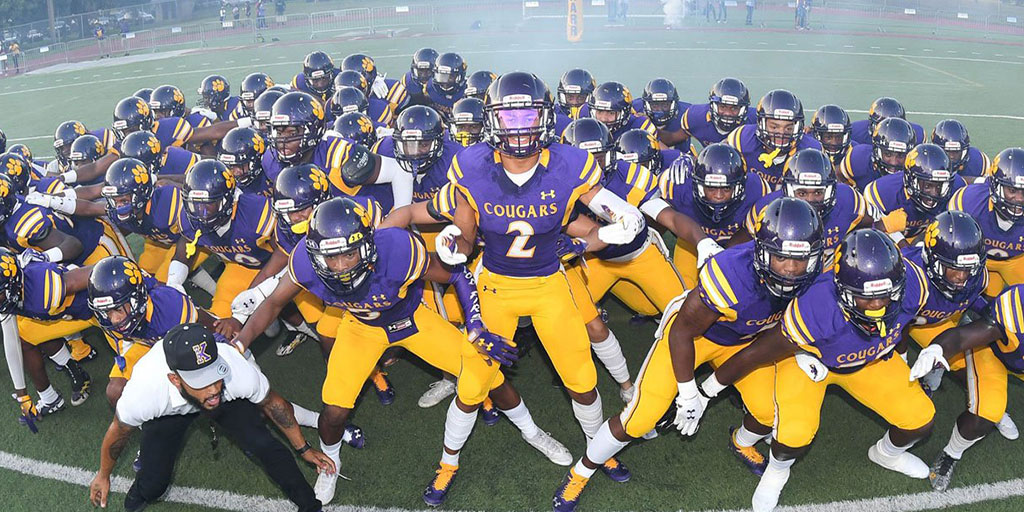 This is a rematch of last year’s championship in which Acadiana won 8-3.  Both teams come into this match-up with one loss on their record; Acadiana’s loss to Catholic High and Destrehan’s loss in the first game of the season to St. Paul’s.  Acadiana averages 32.3 points per game (ppg) while giving up 10; Destrehan averages 31.5 ppg while giving up 9.5.  Acadiana’s point differential is 22.3 while Destrehan’s is 22.  The strength of schedule factor favors Acadiana as the Rams have defeated John Curtis, Lafayette Christian, Ruston and lost to Catholic High.

Destrehan’s offensive line is young but at this time of year, experienced. 6-1; 274 is what their big boys average upfront.  Acadiana’s defensive line is 6-3; 251 but that includes 3 seniors and a junior.

Acadiana’s offensive line averages 6-0, 264 with 3 seniors and two juniors.  Destrehan’s defensive front has 3 seniors, a junior and averages 6-2, 260.  The key to stopping Acadiana’s offensive is you have to stop the dive first. Destrehan has two seniors at LB; Michael Jackson (6-3,220) and Dylan Gibbs (6-0, 200), will they be disciplined enough to control Acadiana’s veer attack.  My opinion is they absolutely will. The problem for Destrehan becomes their offense.  The best way to keep Acadiana’s offense from scoring is by keeping them on the sideline, so can Destrehan’s offense sustain enough drives to keep their defense well-rested?

This will be the ‘adversity’ Destrehan will have to overcome.  If they can and add special teams or defensive touchdown somewhere, they can win this semifinal match-up, but it won’t be easy.  I give the edge to Acadiana 21-10.

Earlier in 2020, for the 8th time in as many tries, West Monroe defeated Alexandria by the score of 18-10.   The 18-10 margin of victory by the Rebels is the smallest margin of victory in the 8 games.  What has to happen for the Trojans to snap the Rebels’ win streak?

For one, under Coach Thomas Bachman, the Alexandria Trojans have been dismissed in the playoffs by Destrehan, Ruston, Acadiana, and last year, Mandeville.  Last week’s quarterfinal win was a huge win for Alexandria, in more ways than one.  By beating Zachary, the Trojans have proved to themselves they can play with the best in this state and now for the first time in school history have gotten beyond the quarterfinals.  Playing in a district with the likes of West Monroe, Ruston, and Ouachita, you are forced to get better and that is exactly what Coach Bachman and the Trojans have done.

On the other hand, everything I just said about Alexandria, does not apply to West Monroe.  The Rebels ‘have been there and done that.’  With their nemesis, Zachary out of the picture; West Monroe feels good about their situation.  The Rebel’s strength is their defense and with the return of their LB/Punter, Peyton Todd, that defense is playing even stronger.  The Rebels have not won a state championship since 2011, with a state runner-up to Zachary in 2018.

In the two biggest challenges of the year for the Trojans, their halftime adjustments have been noteworthy, allowing 0 points to West Monroe and only 7 to Zachary.  If Alexandria can keep things close until halftime, look for the Trojans to pull off the upset.  The keys early:  Alexandria is playing at home; Alexandria believes they can win, so if you are West Monroe, you hope to “punch them in the mouth” earlier and see how the Trojans responded.  If last week’s game is any indication, Alexandria should be fine as Zachary was up 21-10 at half vs ASH.  Whoever wins the turnover battle, will ultimately win the game.  Alexandria wins this game 24-21.

Since 2017, these two teams have played twice every year, once in the regular season and once in the playoffs.  Since 2003, these two teams have played 16 times, Edna Karr winning 15 of them.  Recently, with Coach Jerry Phillips running the show at Easton, things have tightened up quite a bit.  Coach Phillips is a Karr graduate and is awfully familiar with the Cougars.  Last year, in the state championship not many gave his Eagles a chance, including me; but that is because I can’t see or know if a team has heart or not.  Phillips Eagles left everything they had on the dome carpet that night.

The Cougars started off the season by beating Easton 45-20; they followed that win up with two wins versus John Curtis and Catholic-BR.  Their only loss coming to St. Aug by 1, 27-26.  Brice Brown’s group shows up every year.  A lot of people believe Brown wins on the talent at Karr.  Let me be the first to tell you, talent alone cannot win championships.  Brice Brown and his staff coach these Cougars as well as anyone in the state, if not better.  Coach Phillips and his staff can hold their own as well.

I think it will be a tall task for anyone to knock these Cougars off; Warren Easton has the firepower to do it.  Karr is averaging just over 40 ppg while giving up 15.6.  Easton is averaging 38.1 ppg while the defense allows 15.4.  At this particular point and time, I feel that Karr is the stronger team based on their schedule.  I like Karr 38-27.

Carencro set the “alert” button early this season by going to West Monroe and shutting out the Rebels 16-0.  Neville tried to do the same in Ruston as they were up 21-0 at the half and their inexperience created a tailspin the Tigers couldn’t turn around.  Ruston won 38-35 2 OT.  Looking at common opponents there are two, West Monroe and Westgate.  Carencro beat WM 16-0 and Westgate (Week 10) 31-23.  Neville lost to West Monroe 24-7 and beat Westgate in the 2nd Round of the playoffs 53-34.

Carencro’s offense is scoring 41.5 points a game, including 81 vs Plaquemine last week.  The Bears defense is yielding only 13.1. Neville is scoring on average, 43.3 ppg while giving up 11.3.

This is going to boil down to who wins the trenches.  Carencro has all seniors on their defensive line which is averaging around 6-0, 250.  Neville’s offensive line is averaging 226 with one lineman over 6 foot which is Will Campbell.  I am going to have to assume Carencro is going to stop Neville’s run game which is very good.  The Bear’s offensive line and Neville’s defensive line, size-wise, matches up.  So, here is the question, déjà vu from 5A, but can Neville’s offense sustain drives to allow their defense some much-needed rest.  Carencro’s offense is solid and will lean on the defense every play until they wear down.  Carencro wins this 35-21.