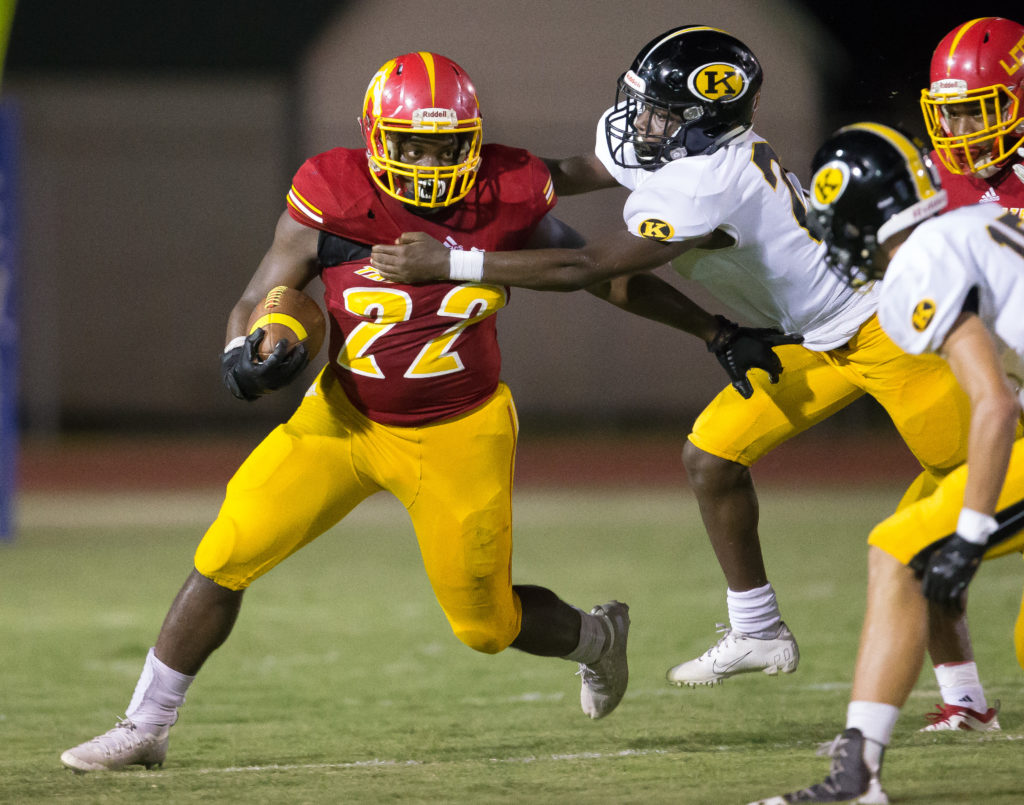 No. 4 Church Point vs No. 9 Madison Prep

When I look at this matchup, I immediately think about Sterlington’s win over Madison Prep in the 2A 2016 state championship.  Church Point execution on offense is detailed; their execution on defense held St. James, the 2019 3A state champions, to 7 points.  The only team, in 3 years, to hold the Wildcats to a lower point total is Destrehan.  They are in the Class 5A semifinals tonight. The offseason hires (Rob Pool) and tweaks to the offense have been top-notch by head coach John Craig Arceneaux.  Because of this, Church Point is making their first appearance in the semifinals in the school’s history.

Madison Prep’s upset win versus Jennings didn’t come as a huge surprise, as Jennings had been ‘living on the edge’ all season.  Week 11’s comeback win vs Lutcher was a good example.  Jennings just couldn’t overcome Madison Prep’s athleticism in the end.

Madison Prep’s offense is scoring 36.3ppg while giving up 13.7.  Madison Prep’s toughest opponent in the regular season was U-High as they lost 28-12, but U-High’s defense is one of the best in the state, especially when talking ‘secondary.’ This will be the matchup that Madison Prep will have to take advantage of if they plan on playing in the championship.  Church Point’s first-year defensive coordinator, Rob Pool, has been up to the challenge, and more importantly, so has his players.  I think this game is one of the more intriguing of the night.  Will Church Point bring pressure, will they sit in the zone, will they add more defensive backs?  How does Madison Prep counter?

Madison Prep is playing their best football of the year by beating Donaldsonville and Jennings in back to back weeks of the playoffs. Church Point is also playing their best football of the year and Coach Rob Pool has them zoned in defensively.  Church Point must control the time of possession and score in the red zone.  If Madison Prep is to win, they will need to find a few big plays.  I have always leaned towards a stronger defense and this game is no different.  Church Point 21 Madison Prep 12

No. 2 Union Parish vs. No. 3 Lake Charles College Prep

Since the split, Class 3A has provided 6 different champions in 7 years, Lutcher being the only school winning twice.  Union Parish won an emotional overtime game in the dome in 2013 vs Livonia; will they be the 2nd team to repeat as state champion since 2013?

The two games I would have loved to have seen this year was LCCP (Lake Charles College Prep) vs Zachary and LCCP vs Jennings; both were canceled for some reason or another.  Just kidding, but they were canceled due to covid-19.  But talking with head coach Erick Franklin this season, he wanted his teams to learn to play their game, not their opponent’s jersey.  This program has only been in existence since 2015, and that mindset is one of the reasons I credit this program for its early success. But going to Union Parish and winning is going to be tough.

A good St. Martinville team traveled to Union Parish last week and lost 47-6; LCCP went to Jena and survived 28-26.  This was a game I thought LCCP would win by a bigger margin.  Union Parish is going to play smash-mouth football; it is going to be hostile, cold, and over 25% capacity.

On the other hand, you can bet the LCCP coaching staff have been grinding the Green Oaks film.  Green Oaks lost 48-42 to Union Parish in Week 8 and Green Oaks’ offense is comparable to the LCCP offense.  This is one of those games that are tough to predict, especially with both teams being undefeated.  I will take the home team in this one as things get sloppy late.  Union Parish 42, LCCP 27.

In eight years since the split, the Many Tigers have been the #1 seed six times.  After beating their 1st round opponents on average 59.7 to 1.8 (not including their 2-0 win this year), they have failed to bring the championship home every year but in 2014.  They have lost in the semifinals 3 times, the finals twice, and in the 2nd round once.  Here is the thing, you cannot always judge your season’s success on whether or not you win a championship.  To win it all, at some point, the ball has to bounce your way. Can this be the year?

On paper, the Panthers are outmanned, outsized, and out experienced. What paper does not show is your confidence and your heart.  In life, having confidence and heart breeds success.  But what happens when you cross adversity?  This is the challenge that faces Coach Wells.

Since 2013, Kinder has been seeded 8 or higher with championships in 2013 & 2015 with a runner-up in 2014. Mangham is a team that is very familiar with a championship atmosphere.  After their tough win last Thursday vs Port Allen, Coach Scott Wilcher has Mangham back on track and at home for another semifinal game.

Kinder is averaging 34 points on offense while giving up 12.5.  Mangham is averaging 43.6 on offense and 21.1 on defense, something has to give.  Kinder had a hard-fought 21-14 win, on the road, in OT last week at Loreauville.  In the 2nd Round, Kinder squeaked by Avoyelles 26-22.  What will tonight bring?

Kinder’s roster triples that of Mangham, but you can only put 11 on the field at a time.  My gut tells me this is going to be a hard-fought game with Kinder’s depth paying dividends for the Yellow Jackets.  Kinder wins 27-21.

Both defenses in this game are respectable, both giving up around 11 points per game.  Oak Grove’s offense is a tad more potent averaging right at a TD more than Homer with 42 ppg.  The question is “Can Homer stay disciplined on defense for 48 minutes?”  Last season Homer was knocked out of the playoffs by Oak Grove, but during Oak Grove’s playoff run, Homer was the only team that kept the game somewhat close.  Homer has a little more confidence this year, can that be enough?  Homer may be a faster team than Oak Grove, will that be an advantage?  I look for this game to be a lot closer than many people think, but I still think Oak Grove wins 36-26.

Before I get started on this game, get a load of this.  These two team’s records combined from 2013-2017 was 18 wins and 81 losses; add Homer in the mix who is in the other 1A semi-final game and all three’s combine record is 30-118; 30 wins and 118 losses for all three schools between 2013-2017.  To be in this spot, at this time is unthinkable.  This is also all three school’s first time to the semifinals as well.  Coach Joseph, Coach Wainwright, and Coach Casey all deserve the coach of the year award.
Last year East Iberville knocked Grand Lake out of the playoffs with a 28-20 in OT; expect another game similar to this.  Bryant Williams #64 is large, fast, and aggressive on both sides of the ball.  East Iberville MUST contain him otherwise he will be a disruption for East Iberville’s offensive line; penetration affects an offense’s timing.  On the offensive side, Williams is the left tackle and Grand Lake is not afraid to run behind him.  However, if you overplay Bryant’s side, they trust their OL enough to go the other way.  Grand Lake’s offensive line is big and physical; they are patient and will run dive after dive until you stop it.  Both offenses are averaging around 34 points a game while East Iberville’s defense is giving up 22.6 a game compared to Grand Lake’s 16 ppg.  East Iberville lives on big plays whereas Grand Lake is a “3 yards and a cloud of dust” type offense.  Look for this game to be decided in the 4th quarter; I think the difference comes down to East Iberville having too many men going both ways.  Grand Lake 27, East Iberville 16