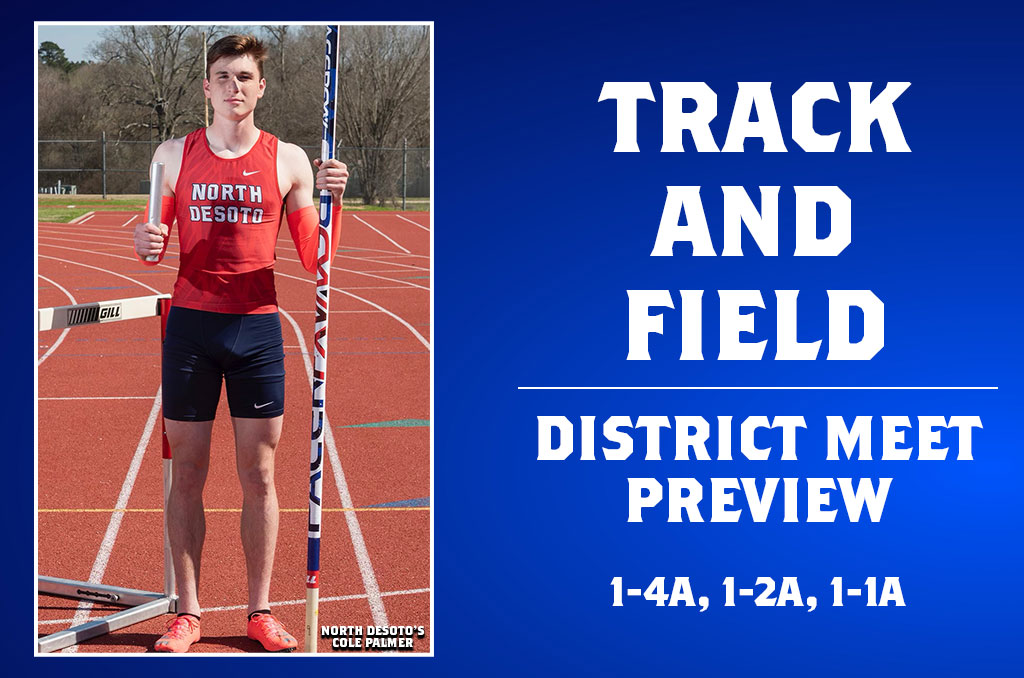 The intensity picks up in high school track and field this week as districts across the state hold their meets to determine district champions and advance athletes to the next level. Locally, the district meet action starts on Wednesday with the District 1-4A meet at North Desoto High School, the District 1-1A meet at Plain Dealing, and the District 1-2A meet at Lakeside High School. Here are some athletes and teams to watch.

North Desoto’s Cole Palmer – Palmer leads District 1-4A in all three of his specialties–the 110 hurdles(14.35), 300 hurdles (39.88), and pole vault (12-0). Palmer’s hurdle times are not just the best in the district. They are the best performances in the state in Class 4A. While his best vault during the outdoor season may not rank at the top, Palmer is still in serious contention for making noise at the state meet as he is tied for fourth in Class 4A with teammate Logan Ferguson and Vandebilt’s Cooper Robert. Vandebilt Catholic’s Hayes Thompson leads the state with a jump of 14-0.

BTW’s Chyler Turner – The Duke signee leads the state in Class 4A in the girls 100 (11.89), 200 (24.43), 100 hurdles (14.02), and 300 hurdles (43.30). In fact, there are only a few elite sprinters in any class who have been able to match or better Turner’s times. Turner won state championships in all except the 300 hurdles as a sophomore in  2019 on her way to Track MVP honors. Her personal bests at last week’s Caddo Parish Championships prove she is ready to impress in the last three weeks of her highly decorated high school career.

Huntington Lady Raiders Field Events – Five different Lady Raiders have the top marks in all of the field events except the discus. Serenity Palmer has the top mark in the high jump (5-0). Demetria Harris leads the long jump (16-10 ½). Nobody in the district has triple jumped better than Huntington’s Catina Davenport (32-11 ½). In the throws, Chastity Taylor (Javelin) and Taylor Bell (shot put) lead their specialties.

Haynesville’s Tyrell Gill – The Golden Tornado javelin thrower has a best of 155-9. Only Ouachita’s Christian’s Chris Holyfield (172-4) has a better throw in Class A.

Jonesboro-Hodge’s Datre’vien Brown – Brown leads the district in three events. He has the best time in the 400 (53.13), while also posting the best jumps in both the high jump (6-6) and triple jump (43-7), which is only three inches behind Episcopal’s Clayton Braud’s 2A leading effort of 43-10. Brown is also ranked No. 2 in all of 4A in the high jump, where he trails Ja’marius Snowden of Northeast High School by two inches.

D’arbonne Woods Charter’s Kenly Smith – The sophomore has a best of 116-7, which leads North Louisiana in all classes in the event, which she threw at Ruston High’s “Hoss” Garrett Relays. In all of Class 2A Smith is ranked No. 3, trailing only Menard’s Hadley Ryland and Pope John Paul’s Mallory Norton.