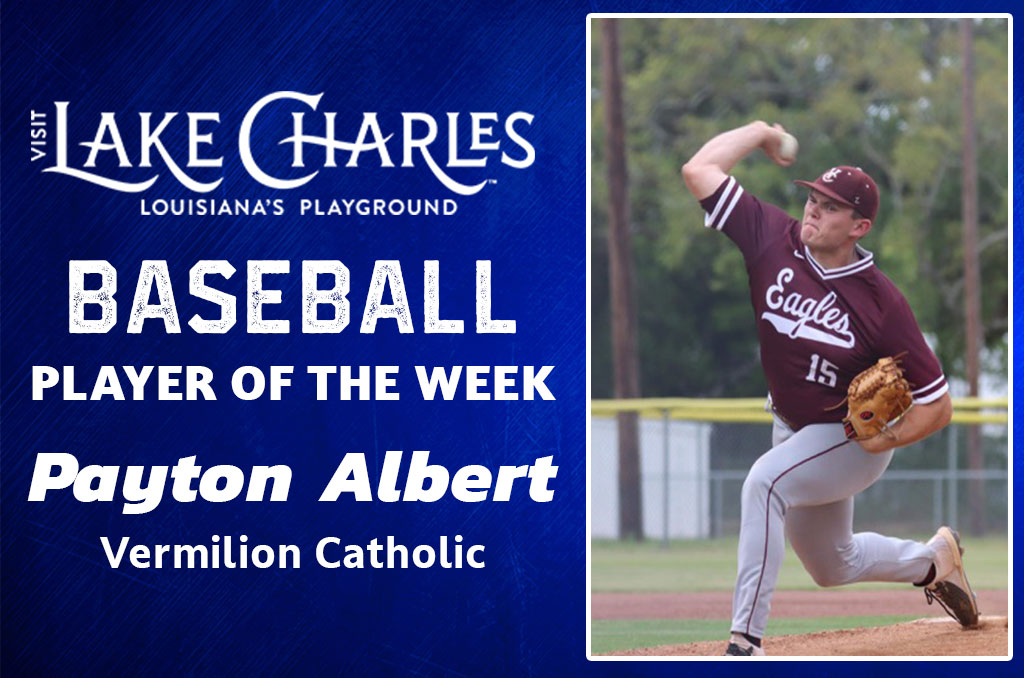 Albert was excellent on the hill this past week where he helped lead his team to a 12-0 shutout victory over Hanson Memorial. He worked all five innings where he delivered 12 strikeouts and allowed no hits.

Almond delivered eight hits in 11 plate appearances last week to help his squad to a 2-1 effort. The third baseman doubled three times and tripled three times to drive in seven runs and stole twice. He was a home run shy of hitting for the cycle in two of the three games.

Against Glenmora in the first of a two-game series, Grace Christian faced a four-run deficit. Amy hit a grand slam to tie the game at eight runs and the very next inning he hit a grand slam again to give Grace Christian the lead and eventual win. His two grand slams drove in a total of eight runs and were also his first two dingers of the season. He is the first player to launch consecutive grand slams in one game in program history. Against Glenmora, Southwood and Winnfield he added five more hits as he had seven total hits on the week with 11 RBIs.

Buratt had a great outing on the week with excellent work on the mound and at the plate. His two appearances saw no runs scored on just three hits while he worked a total of eight innings and struck out eight batters. At the plate, he hit 6-for-15 and delivered a double, a triple, drove in three runs and had one stolen base.

Brown had a great week for the Golden Tors where he pitched a complete-game shutout and allowed no hits while having struck out 14 batters. At the plate, Brown finished with a .545 batting average after having driven in five runs, hit a triple, homered and stole three bases.

In four games this past week Jackson went 11-for-13 with six singles, three doubles, a triple and a home run with eight runs scored and three stolen bases to help the Eagles to a perfect 4-0 mark.

Healy hit 8-for-14 (.571) over the week that including four-extra base hits that helped drive in 10 runs. He double and tripled once across the stretch and delivered two home runs. In addition to his performance at the plate, Healy also stole a base.

Hill was 6-of-9 on the week where he homered in two of his three games, including a grand slam against Country Day, to help lead his squad to an undefeated week. He totaled five RBIs, four runs scored and two stolen bases. Against Northeast, he doubled and hit a home run to drive in three runs. On the sound, Hill pitched an inning of relief against Country Day where he struck out three batters.

In three victories for Northshore, Lasseigne was 6-of-10 with eight RBIs including a grand slam. In the game against Hammond, he was 3-for-3 and drove in a total of six runs due to the grand slam hit.

Wilmouth was 9-for-12 on the week to help lead Sacred Heart to victories in two of its three outings. He finished with two doubles, a triple and drove in seven runs in the process along with two stolen bases and a walk. On defense, he delivered seven outs on ground balls.