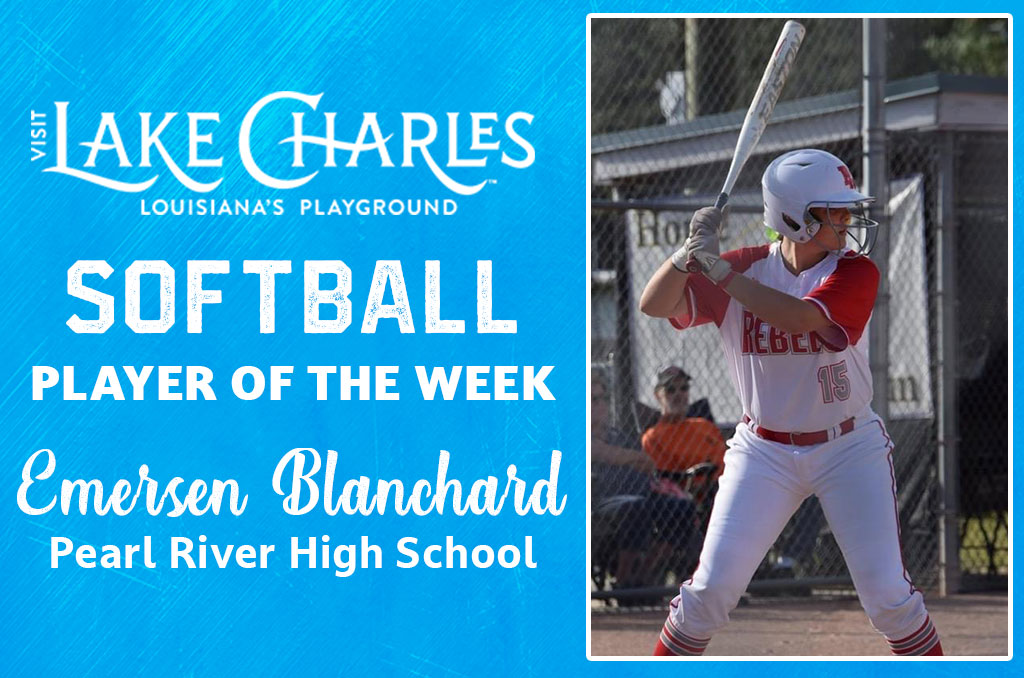 Blanchard helped her squad improve to 6-2 in district play last week as she batted .667 with six extra-base hits that helped drive in 16 runs. The freshman catcher blasted five home runs and turned in a double in wins over Loranger and Franklinton. Emersen’s batting average for the season is .516, slugging 1.145 with 10 Homeruns, 47 RBI’s, and has caught runners stealing 10 times.

Addison Harvey helped lead her team to three wins on the week while stepping into the utility player role at both centerfield and shortstop. On the field, she had a 1.000 FPCT with 12 TC, 5 PO, and 3 A including tracking down a shot hit to the left-center gap leaping up to make the catch at the wall. On the bases she added 7 stolen bases to her career total, swiping her 96th stolen base as a sophomore (96-96) including 3 stolen bases against SJA stealing 2nd base, 3rd base, and home. She extends her hit streak to 23 games in 23 games played on the 2022 season batting .671 AVG with a .694 OBP. In 4 games this week she had 6 hits and 2 BB hitting .462 AVG with a 533 OBP.

Jones led the Lady Timberwolves offensively in clinching a district title this past week defeating North Caddo and then having a successful end of the week defeating Franklin Parish before going 2-1 at the Buckeye Tournament. She was 13-of-18 at the plate with three doubles and seven stolen bases. She helped drive in seven runs and finished the week with a .846 slugging percentage.

Leonard went 9-for-12 at the plate this week in helping lead her squad to a 2-1 mark ont he week. She drove in eight runs and delivered a grand slam. She also had 3 throwouts on steals and limited pass balls to one over the three-game stretch.

Rhymer finished with a .625 batting average while driving in three runs while having scored three runs on five hits. She walked five times throughout the week, having not struck out once. On the mound, she had a 4-0 record with a .000 ERA giving up only one hit & two walks in four appearances striking out 15 in 9.2 innings of work. She also surpassed the 100K mark for the season. In those four games, she also had a perfect 1.000 fielding percentage.

Sutherland hit a scorching .727 (8-11) this week which helped her team go 4-0 on the week. She hit 2 home runs, 2 doubles, had 9 RBI, 9 runs scored, and was a perfect 6-6 in stolen bases. She also made incredible plays at shortstop ranging up the middle taking hits away.

Tyler was efficient at the plate as well as inside the circle for the Lady Falcons this past week. She worked 25 innings and struck out 52 batters for a 2.88 ERA. At the plate, she batted .600 with a double and a triple while driving in six runs and stealing five bases.