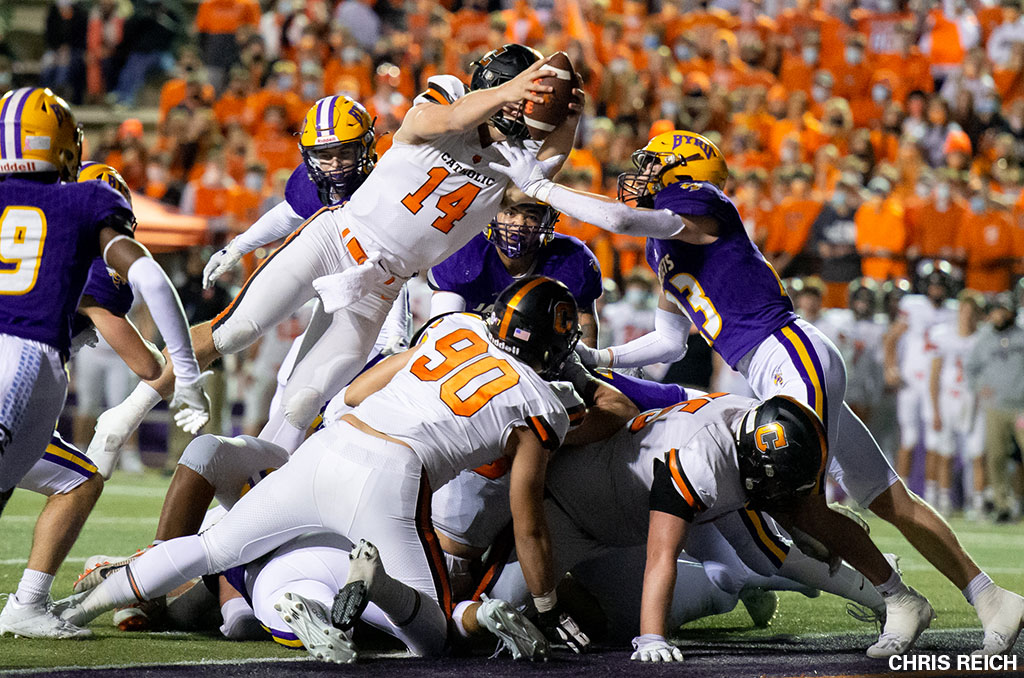 The annual Battle on the Border showcase features an intriguing matchup that football fans will not want to miss Saturday evening as Class 5A’s Captain Shreve faces off against Class 4A’s Leesville in a battle of the unbeatens. Captain Shreve posted a convincing victory over North DeSoto last week while Leesville ran away from highly-favored Jennings. The Gators are led by recruiting target Kendrick Law who can play almost anywhere and will be a key factor in Saturday’s contest.

Oak Grove is looking to avenge its season opening loss to Mangham when it welcomes rival and district foe Ouachita Christian for one of the top battles in the state Friday evening. It will be the 32nd meeting between the two schools with Oak Grove having won three of the last five meetings including a 47-35 victory last season. The Tigers are coming off of a Class 1A state title while the Eagles, who blanked Class 5A Southwood last week, finished as the runner-up in Division IV last season.

Other Top Area Games: Airline at No. 4 Union Parish; General Trass at Wossman; Ouachita Parish at No. 2 Neville; No. 7 Sterlington at No. 7 Mangham; St. Frederick at Cedar Creek

Another huge contest for the St. Thomas More Cougars as they make the trip north to take on the Trojans of Alexandria. STM is looking to post its first victory on the season after a shocking last-minute loss to Madison Prep. Alexandria dominated Ferriday in their season opener last Friday night and hope to ride the momentum into one of its most important regular season games in recent program history.

In what is sure to be a nail-biter Friday night, Iowa welcomes Kinder in the battle of the Yellow Jackets. The last three contests between the two have been decided by eight or fewer points. Iowa took a 48-27 victory over Iota last week while Kinder squeezed by Welsh, 29-28.

Other Top Area Games: Benton at Barbe; Franklin Parish at No. 6 Lake Charles Prep; Iota at St. Louis Catholic; No. 3 Many at DeRidder; Rosepine at South Beauregard

There is nothing like a good rivalry games, especially when both football teams are searching for their first victory on the season. The continuation of the Eunice-Jennings series is huge for both communities with both squads having split the last 10 meetings. Look for least mistakes and the winner in the turnover battle to come out the victory in this anticipated matchup.

Other Top Area Games: No. 8 Church Point at Kaplan; Northwest at Crowley; Southside at No. 3 Carencro; St. No. 9 Martinville at New Iberia; No. 8 Vermilion Catholic at Opelousas Catholic;

Another week and another gigantic task for the Catholic High Bears as they welcome Acadiana into town in a battle of the state champions from Class 5A. The Wreckin’ Rams took home the Class 5A state title last year while Catholic earned the Division I championship on the playing field. Last season, the Bears took the meeting between the two schools in a 28-21 decision. This season will be no different as both schools will throw everything but the kitchen sink at each other in the battle for supremacy in the highest classification.

Other Top Area Games: No. 3 Madison Prep at No. 5 Southern Lab; Scotlandville at East Ascension; St. Paul’s at No. 4 Zachary; Woodlawn (BR) at No. 2 University Lab

No. 9 Dunham at Mandeville

Dunham makes the trek over to Mandeville to face off against the Skippers in an early season matchup that could be beneficial to both teams. The Tigers have the potential to earn a good amount of power points off of this game while Mandeville benefits from the amount of games that Dunham has the ability to win this season.

Other Top Area Games: Franklinton at Covington; Slidell at Lakeshore

St. James and Archbishop Shaw were not confident they would be playing this week but as fate would have it, the two schools found each other and will meet on Saturday at Joe Zimmerman Stadium. Both teams will have much to play for as their communities continue to heal from the devastation brought on by Ida. St. James looks to gain momentum as it clings to championship aspirations while Shaw looks to get its program going once again. Either way, both teams have already won.