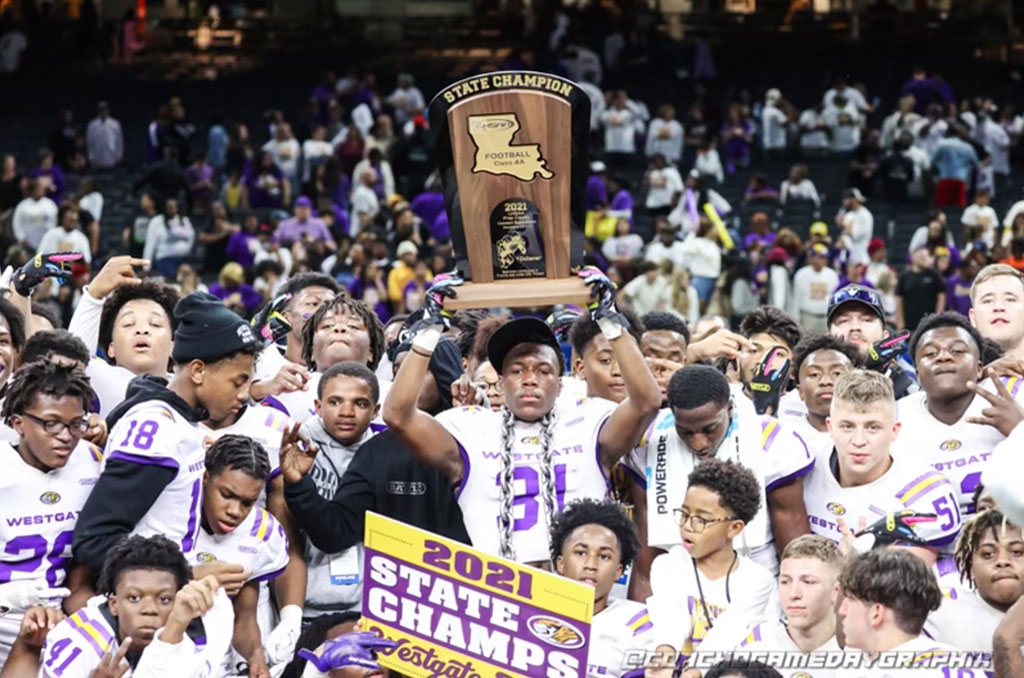 NEW ORLEANS – Football is a game of inches.

That is what Warren Easton head coach Jerry Phillips preached to the media after enduring another loss in the LHSAA Prep Classic. The Eagles needed a touchdown to win the school’s first state title since World War II.

However, it was the determination and grit of the newcomer Westgate Tiger football squad that withstood four goal line attempts from Easton to hold on for the 14-13 victory and the school’s first ever state football championship. The Tigers finished the season with a remarkable 13-2 record.

Warren Easton had a chance to tie the game with six minutes remaining but a missed extra point proved to be the difference in the Eagles coming away from the Caesars Superdome with the trophy. The loss dropped the Eagles to 9-3 on the season.

Danny Lewis, Jr. was named the Most Outstanding Player for Westgate after finishing the game with six catches for 179 yards and a touchdown. The most impressive play came late in the first quarter as he barreled through defenders on the way to a 73-yard touchdown reception.

• 01:32 – WESTGATE | The Tigers struck first as Danny Lewis, Jr. caught a beautiful 73-yard touchdown pass from Jordan Doucet to take the early lead in the ballgame.

• 05:29 – WARREN EASTON | The Eagles were able to tie up the ballgame thanks to a one-yard touchdown run from Jay Gordon to cap off a seven play, 52 yard drive.

• 00:48  – WESTGATE | Junior Dedrick Latulas made a spectacular one-handed touchdown catch for 29 yards to reach the end zone and extend the Westgate lead to one score, 14-7.

• 06:52  – WARREN EASTON | Kai’yon Stamps used a two-yard run to bring the Eagles within one point of tying the lead late in the game. However, a missed extra point would prevent Easton from being able to take it into overtime as Westgate secured the state title win with seconds left.