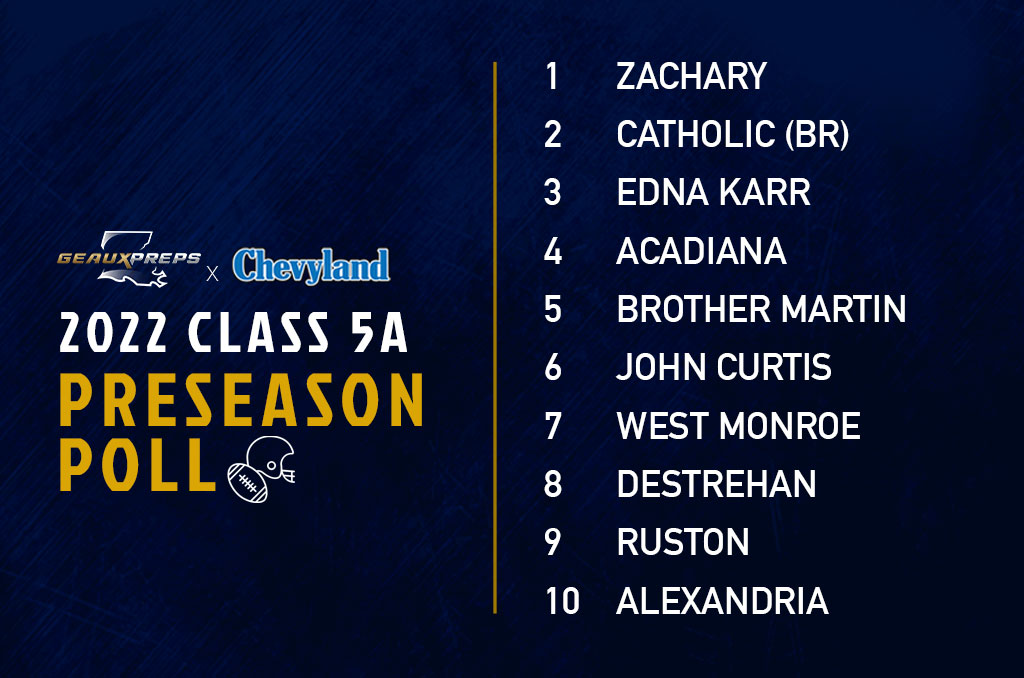 A pair of defending champions represent the top spots of this year’s GeauxPreps.com Class 5A Preseason Rankings presented by Chevyland as Zachary and Catholic of Baton Rouge were selected to rein over Louisiana’s highest classification.

The Broncos knocked off Ponchatoula to capture its fourth state title in six years while Catholic of Baton Rouge soared high over the Division I playoff participants with its championship victory over Jesuit. Zachary returns an experienced offensive line and Alabama quarterback commit Eli Holstein with hopes of returning to the big show once again. Senior safety Kylin Jackson, who recently committed to LSU, will anchor the Bronco defense along with Auburn commit Ashley Williams.

Catholic will be hot again on offense with the return of Daniel Beale under center along with LSU signee Shelton Sampson as well as Daniel Harden. On defense, the Bears will be led by senior linebacker Harold Lawson as well as lineman Josh Johnson.

The No. 1 selection hosts East Ascension, John Curtis and St. Augustine to begin the season along with a road trip to Winona, MS to round out its non-district slate. The Bears start their 2022 campaign at home against Our Lady of Good Counsel out of Maryland with other showdowns scheduled against Warren Easton, University Lab and St. Thomas More before district play.

A newcomer to Class 5A, Edna Karr comes in at No. 3 while Acadiana and Brother Martin round out the top 5.