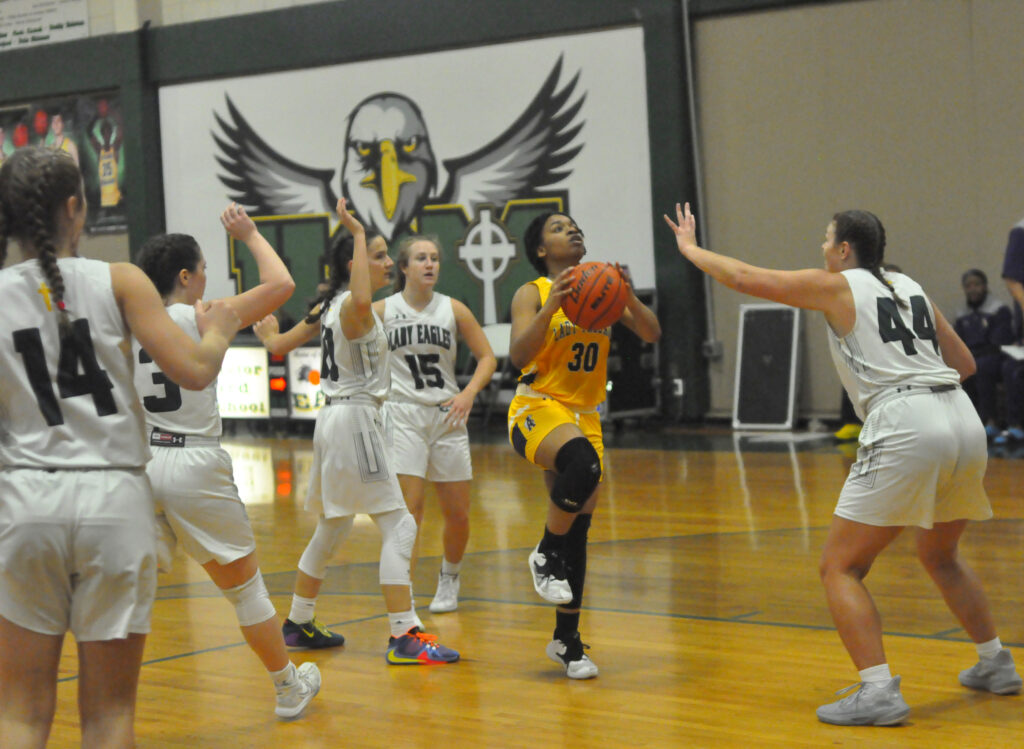 ALEXANDRIA – The Alexandria Lady Trojan basketball team staved off a Holy Savior Menard squad looking to snap a seven game skid in the series Wednesday night as the two met in non-district competition.

The Lady Trojans were able to keep the streak alive with a 40-21 victory over Menard.

“We’re on the road, so it’s always tough on the road,” said ASH head coach Clay Russell. “We just want to be confident and do the things we need to do and hopefully, we’ll be getting better tonight one way or the other.”

The first quarter started out tough for both squads trading blows back and forth. It was a tough defensive battle of the boards, but eventually it was the Lady Trojans who took control of the game.

Once the second quarter started the ASH went on an 8-1 run. Menard was down but not out by crawling back late and unfortunately fell back down at half by 9.

Lainey James, AJ Perry, and Cameron Clark were the stars of the first half. James accounted for three steals that led to a few Trojan buckets. Perry and Clark both added 8 points apiece in the first half.

The Lady Trojans continued to stick to their gameplan that worked in the first half and went on a 7-2 run in the third quarter to extend their lead by 14.

The Trojan defense stepped up in the end and only allowed 2 points the entire fourth quarter to secure the win.

AJ Perry and were Cameron Clark were the leading scores for the Lady Trojans. Perry with 11 and Clark with 12.

Coach Russell was happy with the performances his Lady Trojans put on tonight.

“I’m really proud of the girls, we’ve been trying to change some directions on somethings and we say some of it tonight,” said Russell. “We’re hustling, listening, and doing better.”

“My hats off to Menard. They fought so hard and played hard. We’re just glad to come on the road and be able to win a ball game. Hopefully, we can continue the momentum,” says coach Russell.

The Lady Trojans open up district play Friday against Ruston.