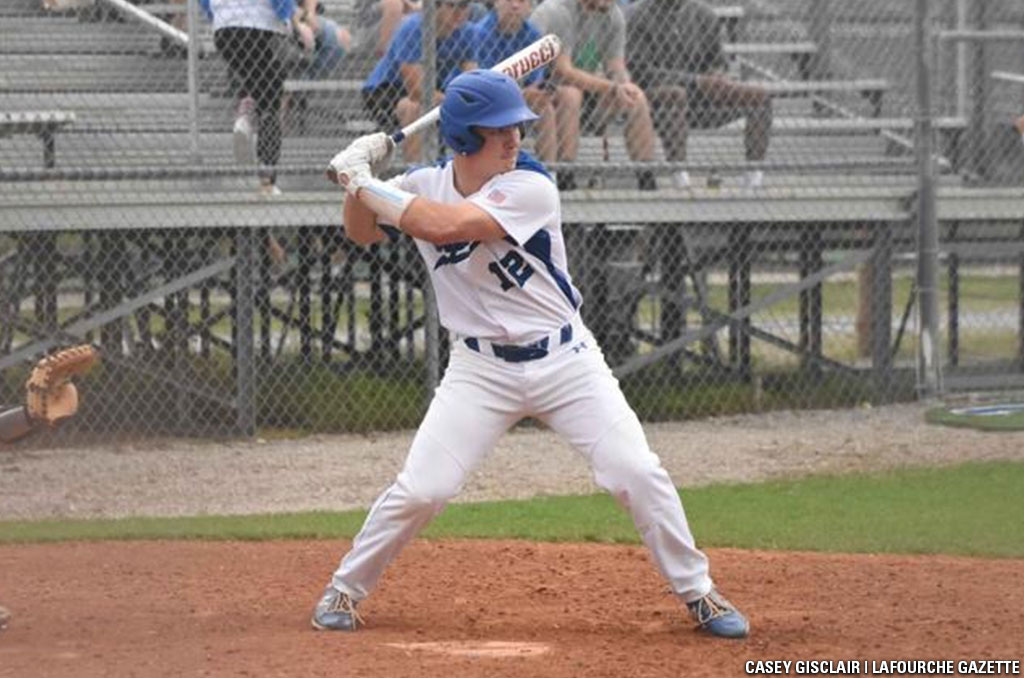 Westlake’s senior baseball class consists of pitchers Dylan Perkins (3-0, 1.27 ERA) and Ethan Koonce (1-0, 0.00 ERA) who have done well on the mound lately. Koonce, a sophomore for the Rams, threw 9 innings of baseball Saturday against Vinton, giving up three hits, no earned runs, zero walks and 13 punchouts.

On the offensive side, Westlake’s Gunner Thornton and Gavin Johnson have led the attack. Johnson walked it off with a two-out double in the ninth inning to get Koonce the win. Thornton leads the team in most of the offensive categories for the Rams.

Michael Curry has done well for the Brusly squad this season and has been on fire the last few weeks. He went 7-for-10 last week with three doubles, a homer and three RBI highlighting his performances. Overall, he is batting .585 in 15 games with three homers and 11 RBIs.

Alec Remedies of Ebarb High School batted .600 at the plate last week along with three doubles and three runs driven in. He also stole three bases.

Ethan DeVanie went 8-for-12 last week for Grace Christian where he drove in 13 runs off of three doubles and a triple. He was also 2-0 on the mound having gave up just one run in eight innings of work while striking out 10 batters.

Northlake Christian’s Justin Diggs threw a complete game against Riverside last week with no runs surrendered in seven innings of work. She struck out 12 batters and walked just one.

A.J. Manasco of Many High School helped his Tiger squad to a 4-1 record last week as he batted 10-for-13 that included five extra-base hits along with eight runs driven in. Defensively, the junior catcher threw out three runs in five games.

Jordan McKenzie had a great week on the mound for Franklinton High School Thursday night as he pitched one inning in relief against Fontainebleau and got the win on a walk-off in the bottom of the 7th inning. Friday night McKenzie threw a no-hitter against the Fontainbleau squad. In two days, he tossed 8 innings struck out 17 batters, allowed no hits, one unearned run and four walks.

Saline’s Sean Staggs threw a no hitter against Mansfield in 10-0 win in the Red River tournament on Saturday, March 20.  Senior pitcher Logan Parker struck out 11 batters with a no hitter through 5 innings. Kenton Lee Crawford closed it out, combining for a 1 hit shutout against Ringgold on Monday, March 22. Saline has only given up one hit in the last two games.

Jase Braquet has put up some impressive numbers through his first 18 games for Carencro High. The junior holds a .542 average (32-for-59) with six doubles and a triple along with 29 RBIs. He has stolen 17 of 20 attempted bases.

Haughton’s Peyton Stovall, an Arkansas signee, has had an exceptional year so far with 25 hits in 44 attempts along with nine homers and 27 RBI. The shortstop has stolen eight bases and walked 19 times, all in 16 games.

Dutchtown’s Nathan Monceaux threw a complete game two-hitter against Sam Houston last Friday where he allowed just two walks and one unearned run. He struck out five in the process. The night before, Austin Brumfield shut out Sulphur in a three-hit complete game.

Bradley Dick of Lakeside High went 9-for-13 last week with three doubles, one dinger and seven runs driven in.