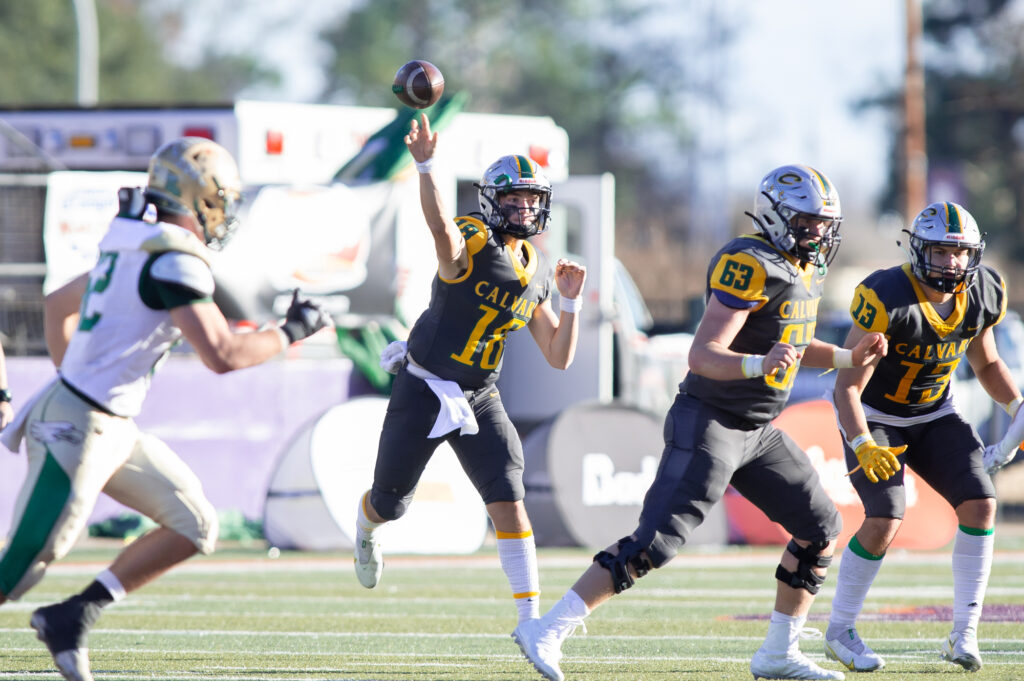 By Jimmy Watson / Written for the LSWA

Not prone to hyperbole, Calvary Baptist coach Rodney Guin has seen a lot of quarterbacks come and go during his 40-year career as a Louisiana high school football coach.

Even though current Dallas Cowboys quarterback Dak Prescott is among those tutored by Guin, the veteran coach isn’t sure he’s had a more well-rounded quarterback than Landry Lyddy, who recently signed with Louisiana Tech.

“I don’t know of a better young man — not just as a football player, but mainly as a person,” Guin said at Landry’s December signing ceremony. “Everything he has done interviewing wise, representing the school, has been unbelievably top notch.”

And the accolades keep rolling in for the 6-0, 195-pound quarterback who was recently named Louisiana Gatorade Player of the Year and the Louisiana Sports Writers Association Class 1A Most Outstanding Offensive Player.

Now, Lyddy can add the LSWA’s Farm Bureau Insurance/Mr. Football title to his resume. He becomes just the second athlete from the Shreveport-area in 26 years to win the prestigious award joining Evangel’s Brock Berlin (1999). The award was begun in 1995 and has featured some of the state’s most recognizable names including Ryan Perrilloux, Derek Stingley and Leonard Fournette.

Lyddy developed from a gangly youngster when he arrived on the Calvary campus four years ago into a confident young man who led Calvary to an LHSAA Division IV state title in 2020. Guin defined how Lyddy matured with his field generalship.

“His understanding of his role on the team and his leadership skills – getting to the point of knowing what we were looking for before we told him,” Guin said.

LYddy completed 232 of 317 passes for a massive 4,247 yards and 53 touchdowns this past season despite playing little more than a half as the Cavaliers dominated eight district opponents.

Lyddy, who maintained a 3.91 GPA, was a Louisiana Sports Writers Association All-State selection last winter. He has thrown for almost 8,000 yards and 100 touchdowns over the past two seasons. He has already fulfilled graduation requirements and will report to La. Tech in March.

“As far as being the type people they are – being a good, good teammate – they both have those attributes, and they’ll help whatever team they go to,” Guin said. “Landry is very coachable, and the success didn’t go to his head. He kept wanting his teammates to do well. Regardless of how many yards he had, he was still working hard every day to get better. The work ethic has been tremendous.”