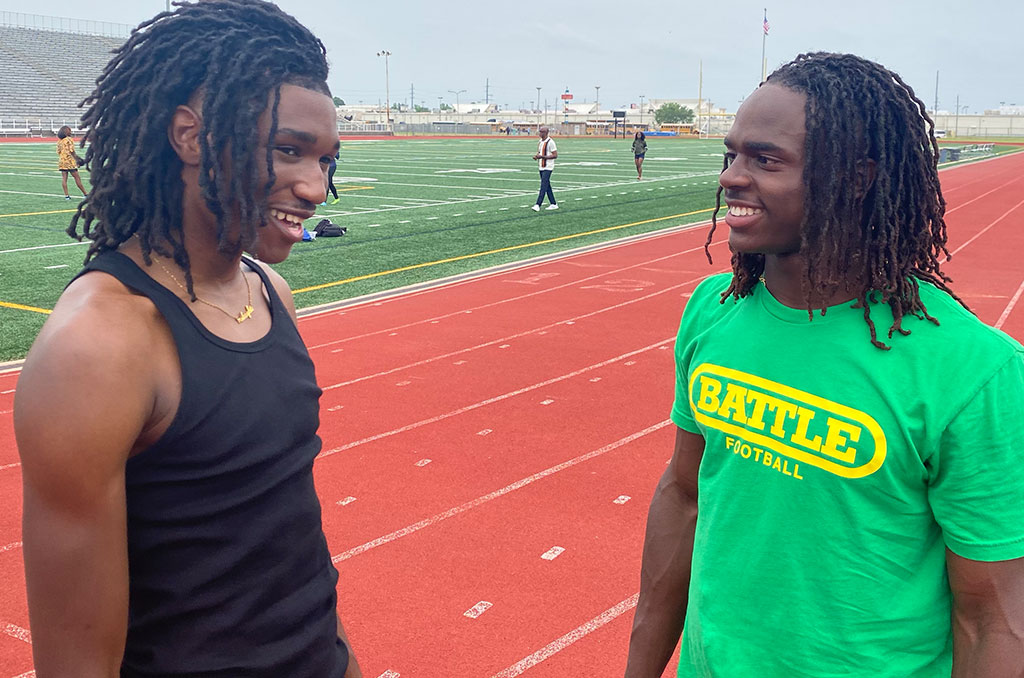 Caddo parish has not been short on great athletes in the 400 meters. Or nicknames, for that matter.

The next in a long line of one lap wonders—with a nickname to boot—has emerged this year in Captain Shreve‘s Marquez “Macho” Stevenson, not to be confused with the former Northwood and University of Houston wide receiver waiting to hear his name being called in Thursday’s NFL Draft.

“Macho,” after posting the best all class 400 meter time (48.25) in the state at last week’s District 1-5A Track and Field Meet is looking forward to hearing his name called on Thursday as well—when the announcer at the Region 1-5A meet at Northwestern State University calls out the results of the 400 meters.

Despite his youth, Stevenson sits at No. 7 all-time in Caddo-Bossier according to local track historian and Mansfield head coach Mychal Word. He has passed familiar names like Parkway’s Dennis Bamburg, Johnson (No.9/48.28), Byrd’s Terry Gatson (No.8/48.27).

Parkway’s Cory Hamilton has the fastest 400 time in Caddo-Bossier with a time of 47.45.

Stevenson has raised eyebrows this Spring, including those of Shreve head coach Kendrick Law.

“I had no idea he would be in this position this soon,” Law said. “He came fresh off of basketball on a Tuesday and he ran in a meet on Thursday. We put him in the 200 meters just to try him there, and he won that.”

In the latter event, Stevenson and teammate Kendrick Law Jr. have battled to the finish line in consecutive weeks. Stevenson won the district title in the event with a 22.28 after conceding the parish champion honors to fellow Gator the week before.

While they are teammates now, that hasn’t always been the case. They met as competitors in summer track. Law ran for SPAR Track Club. Stevenson ran for Natural Talent Track Club in Natchitoches. Both qualified for the USATF Junior Olympics.

“He was always faster,” Stevenson said. “I come to practice every day and he pushes me to be great. When he beats me he always looks back at me, so it was nice to get him at the line at the District Meet.”

Their coach likes the spirit of competition between the two.

Stevenson gives his coach—and his 500s he assigns at practice every day–credit for his rise to the top of the all-time list.

He still has “To-Do” items on his list this season.

“I promised my mom I would win a state championship,” Stevenson said.

His mom, who proudly wore a “Macho’s Mom” T-shirt at the district meet, gave her son his nickname when he was born and weighed 10lbs.