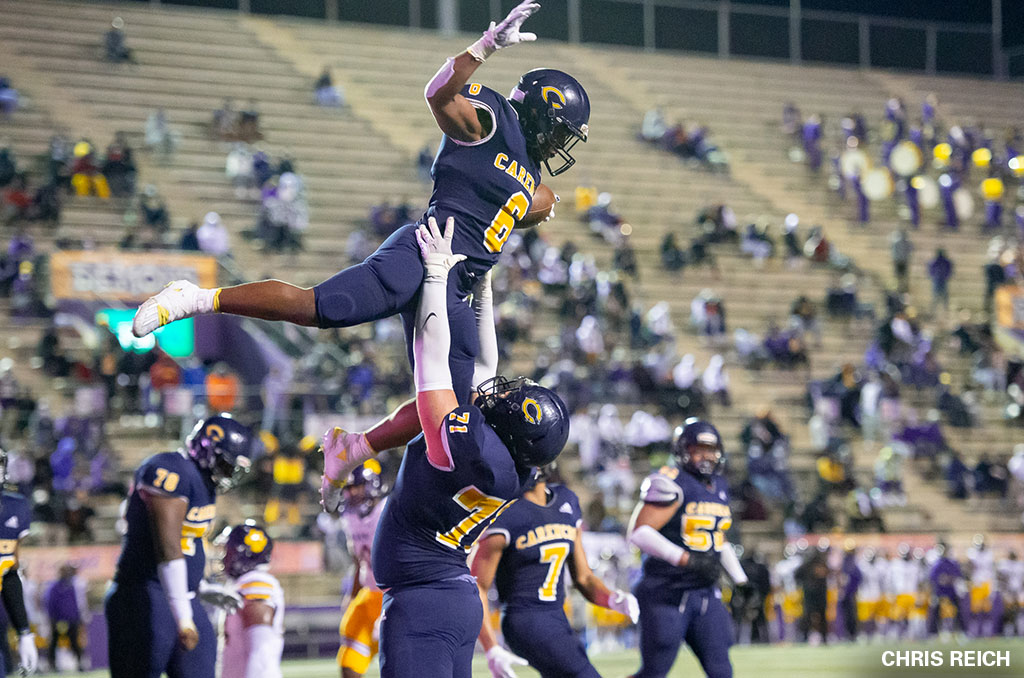 NATCHITOCHES – The Carencro Bears football team did what no other state finals participant has done the last four season’s when it defeated Edna Karr, 35-19, in the LHSAA Class 4A State Football Championship Tuesday night.

The dominant performance helped Carencro finish its remarkable season off with a 12-1 record along with its first state title victory since 1992 and second overall in program history.

Edna Karr dropped to 10-2 on the year after being denied a fifth-straight title. The Cougars left nothing to be ashamed of though as they have now been in the title picture the last six seasons.

Kendrell Williams, voted Carencro’s Most Valuable Player, finished the game with 139 rushing yards and a touchdown. Traylon Prekean also tallied 115 rushing yards along with two touchdowns and a passing touchdown.

Aaron Anderson was voted the Most Outstanding Player for Edna Karr following a great performance on the offensive side of the ball. Anderson totaled 206 all-purpose yards that included 172 receiving yards, 17 punt return and 17 rushing. Quarterback Anterious Samuel threw for 274 yards and two touchdowns on the night.

• 05:35 – CARENCRO | Facing a fourth-and-goal, the Bears used a Traylon Prejean 2-yard run to punch into the endzone.

• 00:07 – EDNA KARR | For the second time in three minutes, Samuel connected with Anderson to give Karr the lead following a 31-yard touchdown reception just before the half.

• 11:11 – CARENCRO | Traylon Prejean targeted Jaylon Johnson on a beautiful 46-yard pass that was hauled in for the touchdown to bring the Bears to within one of Edna Karr early in the second half.

• 06:33 – CARENCRO | Tavion Faulk found Ryan Perry on a 20-yard pass resulting in a touchdown catch to put the Bears up midway through the third quarter.

• 04:10 – EDNA KARR | A reverse turned into a touchdown for Cougars as Aaron Andrson hauled in a 17-yard rushing touchdown to bring the Cougars within three points of the lead.

• 00:12 – CARENCRO | Kendrel Williams busted loose on a 40-yard scamper into the endzone to up the Bears’ lead by a score towards the end of the quarter.

“I am extremely proud of these kids and this coaching staff for what they were able to accomplish. Just like everyone else, we went through the same circumstances, related to the COVID-19 measures. At the first of June, my players were asking if we were going to get to play. I told them that I didn’t know at that moment but I did say that if we got the call that we were going to be ready to go to work. I am blessed to have these kids, this coaching staff plus that locker room full of kids.”

“Before we were able to bring home four straight titles, we had to lose two straight championship games. You just have to take these losses the same way you take the wins. When you make it to the state championship, you are still blessed to be here, especially this year with all of the circumstances. I am proud of our boys. They played hard tonight.”