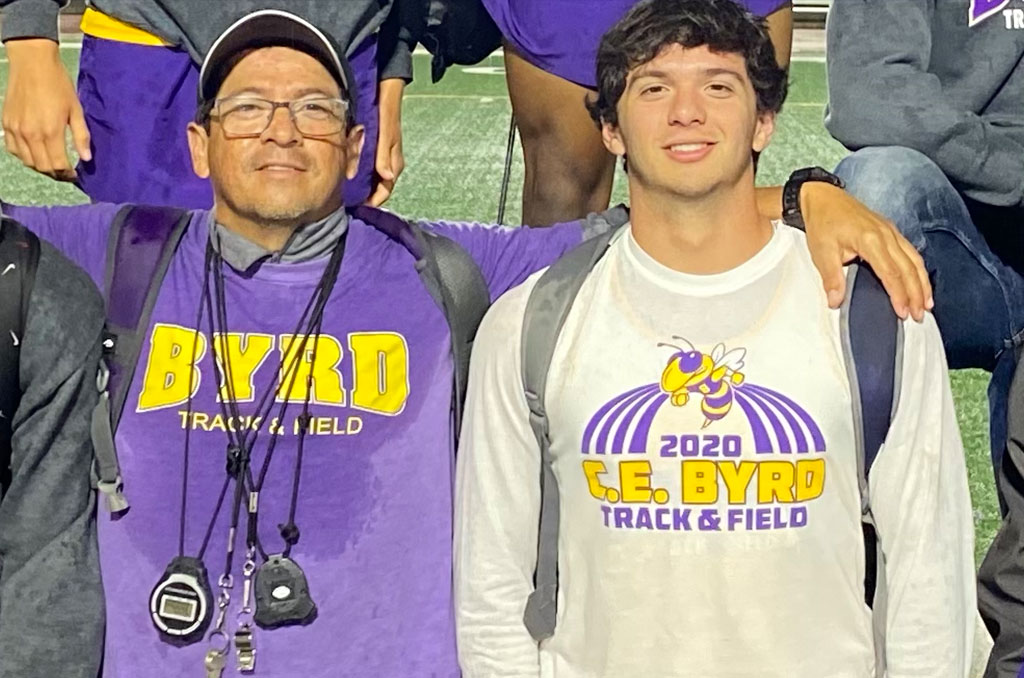 The District 1-5A track and field meet will be a family affair when Airline and Captain Shreve host the meet on Thursday afternoon.

Byrd head coach Juan Plaza remembers well his son’s first meet. It was the Peak Performance Invitational at ULM in Monroe. Jonathan Plaza, who was 7 years old, threw the turbo javelin and won the event. It was love at first gold medal.

Father and son are soaking up all the moments as Johnathan begins the final few weeks of his high school career. Like last Thursday night, at the podium of Lee Hedges Stadium in the rain as the Jackets collected the runner-up trophy at the Wesley-Payne Relays, Caddo’s parish meet.

“It’s been a dream come true,” Plaza said of having the opportunity to coach his son. “He has been at every Byrd meet for the last eight years. I am going to miss having him there at the meets with me.”

Another father and son have enjoyed a good Spring on the track. Captain Shreve’s Kendrick Law took over the head track and field job when Coy Brotherton moved across the river to take the Parkway head football position. Law has coached his son, Kendrick Law Jr., who leads the Gators into Thursday’s meet.

“I thank God,” Law said. “It’s a blessing and I pray he stays healthy. It’s a wonderful feeling to be able to coach a great athlete, but more special when he is your own son. It has been fun to watch him grow and develop into the student-athlete he has become.”

He said his son’s strength development and knowledge of the sport have impressed him the most.

Speaking of Parkway, head girls coach Kent Falting has had much to smile about this season. Not only have his throwers put the Lady Panthers in a position to win the district title–something no team other than Captain Shreve has been able to do in the last five years, but Falting, who also serves as the head cross country coach, has been able to coach his son, Gabe, who, despite being a freshman, has run his way to the top of the district rankings in the 3200.

“It’s been a truly great experience to coach Gabe this year,” Falting said. “I never tried to coach him before high school because I didn’t want to be too overbearing. However, he grew up around the team and that led to an incredible work ethic and drive.”

Gabe Falting even gets text messages from former Panthers his father coached–like Hayden Kingfisher and Sarah Funderburk–both before and after his meets.

Here are some other athletes and teams to watch at the District 1-5A Meet on Thursday at Lee Hedges Stadium.

According to Louisiana Milesplit, her throw is almost ten feet better than any other freshman in the state of Louisiana. Larry’s javelin teammate, Peyton Pipes, who signed a letter of intent to play soccer for ULM earlier this spring, has the second best mark in the district with a 110-11.

“We’ve been blessed to have some incredible talent to show up and throw,” Falting said. “ All of our throwers excel at multiple sports and push themselves past most high school students. These girls want to beat each other, not just their opponents.”

The Girls’ 1600 meters– This race features three of the Top 9 milers in Class 5A. Benton sophomore Isabelle Russell has posted the fastest time in the event with a 5:22.60, which ranks No. 6 in Class 5A. Parkway’s Joslyn Crosby and Byrd’s Bryn Peters, who signed last week with St. Edward’s University (Austin,Tx), are not far behind. Crosby has recorded a best of 5:28.76, good enough for No. 8 in Class 5A. Peters recorded a 5:29.18 at last week’s Wesley-Payne Relays, which broke her own school record in the event.

Captain Shreve’s Stephanie Fuller – The Lady Gator was a big reason Shreve won the last five district titles. She has a district best mark of 17-0 in the long jump, which ranks No. 10 in Class 5A. Her jump of 35-9 ½ in the triple jump, which is ranked No.7 in Class 5A, trails only Natchitoches Central’s Kimberly Cain.

Natchitoches Central’s Kimberly Cain – Cain has the best performance in the triple jump with a 36-3, which ranks No. 4 in Class 5A. She is also on top of the District 1-5A rankings in the girls 400 meters with a time of 59.67.

Benton’s Jamie Willis – The sophomore from Benton, who did not get a season last year due to covid, is making up for lost time and making a name for herself in the hurdles. She leads the district in the 100 meter hurdles (15.33), where she is tied for fifth in Class 5A, and 300 hurdles (47.77), which is ranked No. 10 in all of Class 5A.

Haughton’s Jiana Stewartburgess – Haughton’s junior is tied for the lead in the girls high jump with Parkway’s Williams at 5-0. The mark is ranked No. 13 in Class 5A.

Natchitoches Central’s Oluwagbe Ojemakinde – Ojemakinde leads the Chiefs in the field events where he owns the best marks in both the shot put (52-5) and the discus (158-3). His performance in both throwing events are ranked No. 2 in Class 5A.

Benton’s Jacob Marcinkus – The District 1-5A Cross Country champion led the Tigers to their first district championship in 5A in the Fall, and appears to be ready to have the same impact this week at district. Marcinkus, who signed with ULL earlier this Spring, leads the district in the 3200(9:42.73) and has the No. 2 in the 1600 (4:31.06) trailing only Parkway’s Madison Langley’s 4:28.20. If need be, Benton head coach Scott Reeder could call upon Marcinkus in the 800 meters as well.