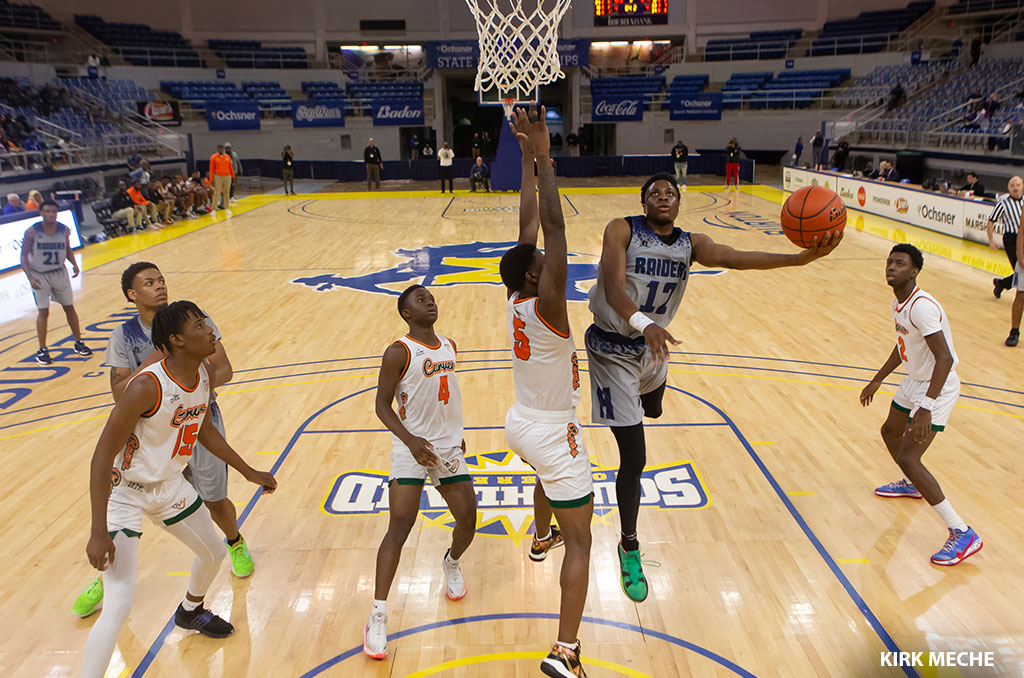 LAKE CHARLES– It was the dominant effort of four teams that highlighted Wednesday’s semifinal contests at the LHSAA Boys Basketball championships.

G.W. Carver put on a basketball clinic in Wednesday’s opening game as the Rams secured their spot in the Class 4A state title game for a second straight year following an 84-35 win over Huntington.

The Raiders hit a shot from beyond the arc to begin the game but it was Carver after as the Rams used a 10-0 run to jump out to a quick and commanding lead in the first quarter.

A barrage of points in the second quarter allowed Carver to hold a 41-15 halftime lead as Huntington was outmanned inside the paint with the Rams controlling the board when they weren’t forcing turnovers.

Carver’s Jaylon Hicks led the game with 20 points while Solomon Washington recorded a double-double with 16 points and 12 rebounds. Dorian Finister scored 19 points in the game and finished with seven boards.

Kameron Evans led the scoring effort for Huntington with eight points along with three rebounds.

McMain’s gradual offensive effort was enough to keep Edna Karr at bay throughout the majority of Wednesday’s Class 4A semifinal game as the Mustangs took a 52-41 win to set up a rematch with G.W. Carver for the state title on Saturday.

With only a four point lead over the Cougars after the first quarter, McMain pressured enough to keep a narrow lead at the half. Karr continued to struggle fro the field causing the Cougars to not be able to gain any sort of momentum.

The Mustangs eventually built their lead to 21 and seemed to have the game in control but a late rally from Karr kept the defending state champions on their heels.

The Cougars used a 14-2 run near the end of the final period to cut the lead to within nine. However, a lack of time to catch up the lead score plagued Karr as McMain was able to keep the opposition at bay for the win.

Alex Hammond led the scoring effort for McMain with 15 points as well as eight rebounds and three assists. Corey Chest finished in double-digit scoring with 10 points on the afternoon.

For Karr, Leland Smith had 11 points and eight rebounds in the game. The Cougars shot 15 of 49 from the field for the entire game.

For a second straight year, Zachary is headed back to the Class 5A title game.

The Broncos used a string of strong runs throughout Wednesday to claim a 75-60 win over Ouachita Parish that started with an eight-point lead in the latter half of the first quarter.

A couple of shots from beyond the arc further separated the top-seed but the Lions strung together a few key shots of their own in the second period to cut the Zachary lead to just four points.

However, the Broncos kicked offense back into gear as their aggressive defensive continued to put on a clinic and helped stretch the lead by 13 following a 28-8 run in the last six minutes of the half.

Ouachita would not go away without a fight as the Lions used another 8-2 run to open the 3rd quarter forcing Zachary to call a timeout in the first three minutes to regroup.

The timeout proved to be all the Broncos needed as they were able to fend off the opposition despite being outscored, 15-7, in the third quarter.

There were spurts of energetic runs from the Lions in the final period but the damage had already been done and the journey to tying up the game faded away as time dwindled. Both teams each scored 20 points to close out the game.

Jordan DeCuir led the game with 24 points on the night for Zachary.

For the first time in school history, Northshore is going to the dance!

The Panthers knocked off No. 7 Walker, 68-54, Wednesday night to advance to the Class 5A title game against Zachary on Saturday.

Walker seemed to have the upper-hand in the first quarter where the Wildcats led 16-12 despite several small runs from the Panthers.

However, foul trouble and the injury bug began to plague Walker starting in the second half which allowed Northshore to take advantage. The Panthers used an 18-9 second quarter effort to go up by five over Walker, highlighted by a 16-2 run with less than five minutes remaining.

Similar to the second quarter, Walker could not sustain a rhythm over final 16 minutes as the Panthers continued to stretch the lead, little-by-little. The Wildcats went over half the quarter without a field goal.

Walker did get a few runs going in the final period but was countered by the continued effort of the Panthers to make sure their bid to the title game was secured.

Northshore was led by James Bridges who scored 25 points along with 10 rebounds while Fabian Hartley also contributed with a double-double on the evening. Kohen Rowbatham finished with an impressive 20 points, four assists and five rebounds.