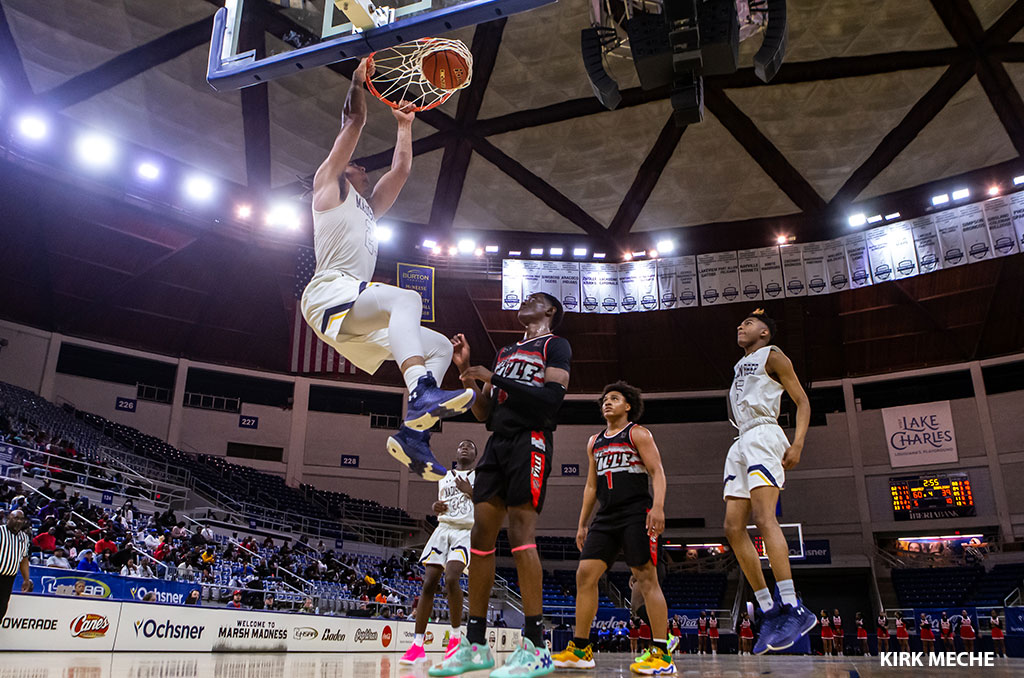 LAKE CHARLES – The games are set. 14 teams across seven classes will compete Friday and Saturday for championship gold as the LHSAA Boys Basketball Marsh Madness begins to wind down at Burton Coliseum.

Madison Prep will get a chance to defend its state title win from one year ago.

The Chargers took care of business Thursday in a 70-45 win over Donaldsonville to advance to the Class 3A title game where they will face Wossman.

A quick 8-0 lead for Madison Prep set the pace as shooting woes and foul trouble marred Donaldsonville early. The Tigers drew seven fouls in the first quarter alone while shooting just 18% from the field.

From the other end, the Chargers took full advantage from the charity stripe, hitting over 70% of their shots throughout the entire game.

Donaldsonville tried to get some offensive momentum going in the second half but could not sustain significant runs to cut into the lead.

For Madison Prep, Percy Daniels led with 25 points and 14 rebounds. The Seton Hall commit totaled the most points in the game. The Chargers also received a double-digit scoring performance from Jayce Depron, Dylan Dominique and Dez’mond Perkins.

Donaldsonville had three players score 10 or more points with Zykiren Cole leading the way with 14 points and eight rebounds.

For the third time in four years, Wossman will compete for a state championship following a 56-46 semifinal win over Bossier Thursday afternoon.

The Wildcats got out to a huge lead after the first quarter, outscoring the opposition 14-1.

Bossier began to heat up the scoring in the second quarter however and pulled to with seven of the lead following a 9-4 run in the last two minutes of the half.

The Bearkats continued to chip away at the lead pulling to within three of the lead heading into the final period. But it was Wossman that had the final boost as the Wildcats outscored 19-10 to hold on to the lead and punch its ticket back to the title game.

Albert Shell led Wossman with 14 points and 12 rebounds while Patrick Williams (13) and Antron Mason II (11) each finished in double-digits.

For Bossier, Joseph Manning led with 16 points and seven rebounds. The only other double-digit effort for the Bearkats came from Tahj Roots who finished with 10 points along with four rebounds.

With a 73-69 upset over No. 1 Lakeview, Amite will get the opportunity to win its second championship in school history.

The Warriors secured their spot in a title game for the first time since 1985 and is the third school in the 2021-22 school year to compete for a championship following football and girls basketball.

Amite came out on fire in the first half following a 5 point run from the Gators to start the game. The Warriors finished the first quarter on a 17-3 run to stretch its lead to a comfortable nine point gap.

Lakeview’s offense kicked into gear in the next period but whenever the Gators scored, the Warriors immediately had an answer with some huge shots to go into intermission up by 16.

The Gators once again came out hot in the second half with a 8-2 run to start the third quarter but Amite banked a couple of three-point shots along with responding buckets to again extend its lead to 12 points as both teams headed into the final quarter.

Lakeview cut the lead to eight towards the end of the game but foul trouble eliminated some of its key players from finishing the game allowing Amite to take full advantage and secure its lead for the eventual win.

For Amite, Lemar Harris led with 19 points and seven rebounds along with three assists while three others finished in double-digit scoring.

Lakeview’s Javonte Howard scored a game-high 25 points along with eight rebounds and three assists while two others scored 10 or more points in the game.

A four-point deficit following the first quarter of play was all Port Allen needed to kick the offense into gear and blow by Rayville to earn a trip to their fourth straight title apperance.

The Pelicans used a 20-4 run in the second quarter followed by a 15-4 run in the third quarter to stretch its lead to a 24-point advantage heading into the fourth quarter.

Despite 20 turnovers in the game, Port Allen was able to keep Rayville at bay as the Hornets suffered from a 24% shooting woe.

In the final period, Rayville scored just four times in the last five minutes while the Pelicans continued its lead scoring at will.

Jordan Brooks led the game with 18 points and seven rebounds while Elliot McQuillan (12) and Isaiah Howard (12) each finished in double-digits. Howard recorded the double-double with 13 rebounds.