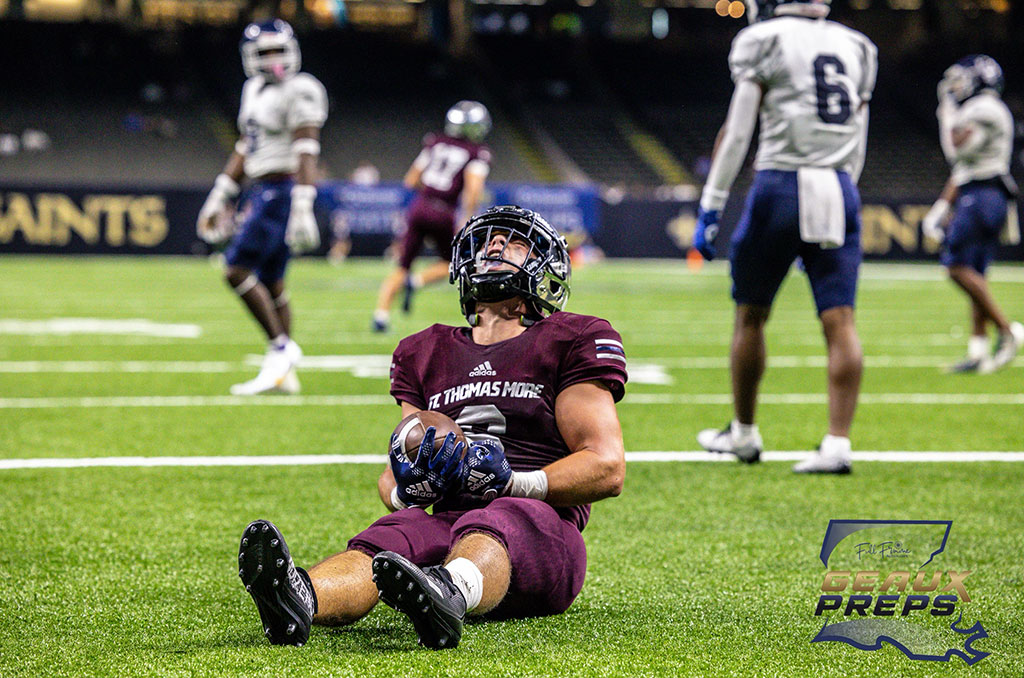 NEW ORLEANS – What a game.

In one of the craziest finishes in LHSAA state championship history, the St. Thomas Cougars used an onside kick and back-to-back scoring plays to upend Lafayette Christian, 52-48, and claim the Select Division II state title.

The championship is the Cougar’s fourth in the history of the program and third in the last four years. With the win, St. Thomas More finished 13-1 on the year.

It was a slow start to what would end up being a 100-point affair as St. Thomas More led 3-0 after the first quarter. From there, the scoring commenced as both teams used a pair of touchdowns in the second period to light up the scoreboard.

Following intermission, Lafayette Christian came out on fired using a total of seven plays to score twice and take their first lead of the game. The two squads continued to trade scores and combined for 69 total second half points.

The loss drops Lafayette Christian to 10-4 overall on the year as the Knights advanced to their sixth state championship game.

STM’s Sam Altmann was named the Most Outstanding Player after throwing for 422 yards and six touchdowns, including the game-winning throw at the end of the game.

Lafayette Christian’s Ju’Juan Johnson was named the team’s Most Outstanding Player after having combined for 585 total offense as well as five touchdowns.

• 9:23 – ST. THOMAS MORE | Kicker Brandon Bourque connected on a 31-yard field goal for the opening points of the game.

• 9:16 – LAFAYETTE CHRISTIAN | The Cougars cut the lead back to three with an 11-yard reception from Trae Grogan following an impressive drive led by quarterback Ju’Juan Johnson.

• 2:57 – ST. THOMAS MORE | An old-school, ball-controlling drive was capped by a 2-yard pass from Altmann to Tanner Hornbeck to give the Cougars a 17-7 lead.

• :15 – LAFAYETTE CHRISTIAN | Johnson’s 16-yard pass was caught by Dudley Jackson as the Knights again cut into the lead, 17-14, prior to intermission.

• 11:24 – LAFAYETTE CHRISTIAN | Dudley Jackson gave the Knights their first lead of the game following a 23-yard scamper to make it 21-17.

• 10:01 – LAFAYETTE CHRISTIAN | On its seventh offensive play of the second half, Lafayette Christian stretched its lead to two scores as Alonzo Ryes finds paydirt on a 36-yard touchdown pass.

• 8:46 – LAFAYETTE CHRISTIAN | The Knights used another quick scoring drive to go up by 10 over the Cougars as Dudley Jackson broke loose for a 61-yard run.

• 5:16 – ST. THOMAS MORE | Tanner Hornbeck hauled in his second touchdown on the day with a 9-yard catch from Altmann to cut into LCA lead.

• 0:59 – LAFAYETTE CHRISTIAN | Johnson scores from five yards out to give LCA a 10-point advantage late in the third period.

• 1:00 – ST. THOMAS MORE | With under two minutes remaining, STM uses a 5 play, 80-yards drive capped by Altmann’s 44-yard touchdown pass to McNees to bring the Cougars to within three of the tying the lead.

• :49 – ST. THOMAS MORE | In what could go down as one of the great comebacks in LHSAA history, the Cougars recovered an onside kick and on the next play Altmann tossed a 56-yard bomb caught by Connor Stelly to take the lead and the eventual win.