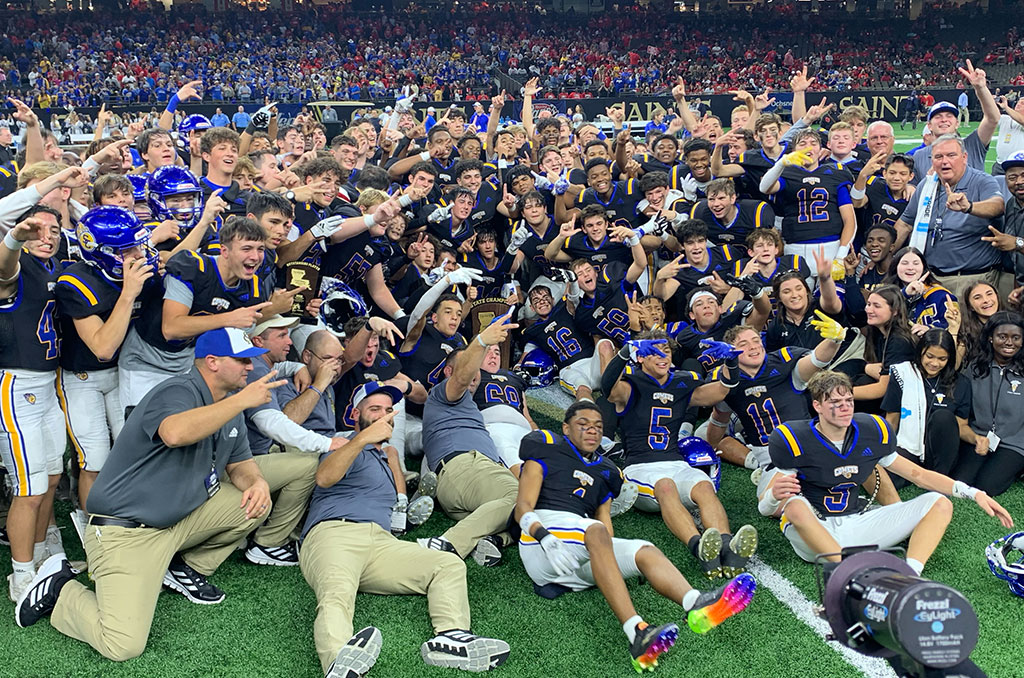 NEW ORLEANS – For the second consecutive season, the St. Charles football team will take a state championship football trophy back to LaPlace to celebrate the Christmas holidays.

The Comets used a come-from-behind rally, trailing by 11 points headed into the the fourth quarter. Quarterback Ayden Authement aided in St. Charles’ rally accounting for the final two touchdowns that helped seal the state title victory.

Thursday night’s win gave St. Charles its 11th victory on the season as well as the program’s third state title.

In the first half, St. Charles controlled possession but it was Dunham who took advantage of some quick strikes that helped get the team out to a 14-7 lead. St. Charles tied the ballgame at 14-14 each just before halftime thanks to a touchdown from Samare Scott.

Dunham stretched its lead to 11 points in the third quarter but it was the sustained drives from St. Charles that once again helped the Comets by eating up over half of the final 24 minutes.

• 4:23 – ST. CHARLES | The Comets lit up their side of the scoreboard with a 21-yard scamper from senior tailback Davon Stirgus to knot the game up at 7-7.

• 5:51 – ST. CHARLES | Samare Scott punched it in for the score on a 1-yard attempt to again tie the lead at 14 points apiece midway through the second quarter.

• 11:07 – DUNHAM | House took a nine-yard carry in for paydirt to help extend the Dunham lead to a seven-point advantage.

• 3:51 – ST. CHARLES | Tyler Milioto’s 29-yard field goal cut the Dunham lead down to four towards the end of the third period.

• 10:36 – ST. CHARLES | Jackson Monica scored on a 2-yard pass from Ayden Authemant followed by a successful two-point conversion to pull St. Charles to within three of the lead.

• 5:39 – ST. CHARLES | Authement’s three-yard rush capped the come-from-behind victory as the Comets took a 32-28 lead that held despite one last attempt from Dunham.